The Bendy Bus: A Transport Revolution 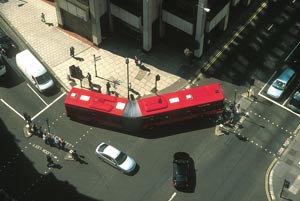 The short wheelbase of the front half of the vehicle gives good manoeuvrability in tight spaces, allowing the large vehicle to negotiate narrow roads © TfL

The use of bendy buses is spreading throughout the UK in cities such as London, Nottingham and Bath, and with the addition of long distance services from London to Glasgow. Undergraduate John Bickerton looks at the practical and business considerations of articulated vehicle operation and the technical challenges of building such a large vehicle.

Just the mention of public transport is enough to provoke complaints about the lack of adequate timely, convenient and cost-effective alternatives to tempt us away from our cars. Trains don’t depart at the time we want, or go where we want, and they’re often disproportionately expensive. Nobody knows where buses go or when they are due to come back. Both can be smelly, noisy and dirty – but the only alternative is to walk or use a taxi. Many UK cities operate Park and Ride schemes which use buses to keep the cars of incoming shoppers out of congested city centres. But as a complete replacement of the automobile, the bus is confined to those with low incomes or in situations which restrict them from owning, using or storing a car.

For people in the latter category, the bus is invaluable and passenger numbers are rising. Transport for London (TfL) commissioned an independent report in 2004 which found that over a third of visitors in a typical city centre arrive by bus, despite the fact that half had access to a car. However, services can only expand when the revenue from the route justifies expansion, because the priority of commercial transport companies is to make money, not move people. Some well-placed and well-managed bus routes in the country are making good profits and services are expanding faster than ever.

As a bus service expands the traditional solution is to increase vehicle frequency and to use larger vehicles – particularly double-deckers. Commercially, an increased frequency needs a greater number of vehicles with an associated increase in cost for vehicle running and maintenance and additional demand for drivers, at a time when every large operator in the UK is currently advertising for driving staff.

Where more passenger seats are required but routes include low bridges or simply need a larger capacity than that of a double-decker bus, UK operators are increasingly turning to articulated vehicles – “bendy buses. ”At 18m long, TfL’s Mercedes Citaro articulated vehicle carries 60 more people than a double-decker bus. These and similar bendy buses have been used successfully on the wide streets of continental countries for many years. Here, their use has been slow to gain popularity except as a novelty because of their perceived unwieldy bulk.

The evolution of the bendy bus

The vehicles use a standard powertrain and chassis borrowed from the range of conventional buses. These use a modular system and a rear engine–rear wheel drive layout to permit vehicles of differing wheelbase to be constructed more easily according to the customer’s order. To construct an articulated vehicle, the front section of the bus borrows the generic front axle and driver’s environment, and a dead non-steering axle is added behind to give an unpowered ‘trolley’. The engine, gearbox and driven axle are combined with a separate section of chassis and the existing rear bodywork design to form a two-wheel powered trailer.

The two halves of bendy buses are married together using a heavy pivot pin below floor level. By driving the rearmost axle with an engine mounted at the back of the vehicle the saloon floor remains unobstructed and can be classified as ‘super low floor’ throughout, a legislative consideration and a boon for pavement-level access from the rear doors of the vehicle. A turntable arrangement is constructed in the saloon to give a continuous floor and ‘bellows’ seal the vehicle interior from the environment.

The powertrain layout does present some new challenges, such as the danger of ‘jacknifing’ the vehicle under its own power during tight cornering when traction for the centre axle is limited. This was addressed by introducing limit switches that restrict the output from the engine when the pivot angle exceeds a threshold. Even so, the tolerance on these values is such that in snow or icy conditions it is still possible for the unskilled driver to slide the vehicle considerable distances, certainly a memorable experience for anyone involved!

Since the vehicle’s front half is smaller than the previous vehicle’s total wheelbase and the extra space needed for the trailer in tight bends is a few feet at most, the bendy buses ought to be as manoeuvrable as any other vehicle on the route. However, the sheer bulk of the vehicle can form a psychological barrier for the driver, or else a simple matter of geometry means the road is blocked. There have been instances in city centres where gridlock has occured because of careless parking. But in Bath, where bendy buses have been running for a few years now, aside from a small number of isolated incidents, the buses have increased the passenger capacity of routes by over 50%.

The only bottleneck that occurs on the Bath routes now is the process of loading and unloading passengers. Bath’s vehicles have two sets of doors but the driver can only load through the front doors since passengers buy tickets on board. Similar operations by TfL favour three-door vehicles and pre-pay ticket operation and this is under consideration by the First Group, which operates the bendy buses in Bath.

There is a continued image problem with bendy buses and this issue is being addressed by the transport operators in a range of ways. First Group is proposing an articulated vehicle using pneumatic tyres on a segregated roadway in towns such as Leeds, Sheffield and York, as a hybrid concept between a bus and tram. It remains to be seen whether this will lead to an increase in public transport usage or simply a transfer from existing modes. However, the infrastructure associated with bus lanes and segregated roadways requires considerably less investment than that of a railway, making proposals more attractive for lower budget projects or those demanding a faster return on investment.

Bigger buses for the future

Overall, bus sizes are increasing to provide greater capacity for similar cost but a cultural change is needed to really benefit from the advantages of road passenger transport. Tramways and light railways offer a solution which appears different but requires huge initial investment for new systems. It will certainly be a long time before we see any new underground rail systems implemented outside London, so guided bus-ways may offer an intermediary answer in the short to medium term. Crucially, they are more attractive to the parties who bear the cost of implementing and operating the services. The task of running the services on time and maintaining customer satisfaction, however, will remain a problem to be addressed whatever the infrastructure.

John Bickerton is a final year undergraduate at Bath University studying towards an MEng(Hons) in Automotive Engineering. In 2003 John won an Engineering Leadership Award from The Royal Academy of Engineering. During his time in Bath he has worked as a part-time bus driver for the local operator, First, and was one of the original team of drivers trained to operate the articulated vehicles in Bath when they were introduced. He is now looking to combine his training and experience in the field at graduate level.

The Value of Innovation

The evolution of transport propulsion efficiency over the last 50 years