Did you know?
• Agriculture accounts for 10% of all greenhouse gas emissions
• Ploughing brings organic matter to the surface, releasing carbon dioxide. This is being tackled with engineered ‘conservation tillage’
• Agricultural engineering can also increase the removal of carbon from the atmosphere
• On steep slopes, field engineering structures control surface run-off and soil erosion

Agriculture started by trial and error but today, the fields we see are the result of an engineering system approach to manage fertility, crop production and, increasingly importantly, the carbon emissions and sequestration that are an inevitable part of the biosystem. Professor Jane Rickson, Professor of Soil Erosion and Conservation at Cranfield University, discusses the potential of agricultural soils to reduce carbon emissions; capture atmospheric carbon and store more terrestrial carbon; and how agricultural engineering is helping achieve this. 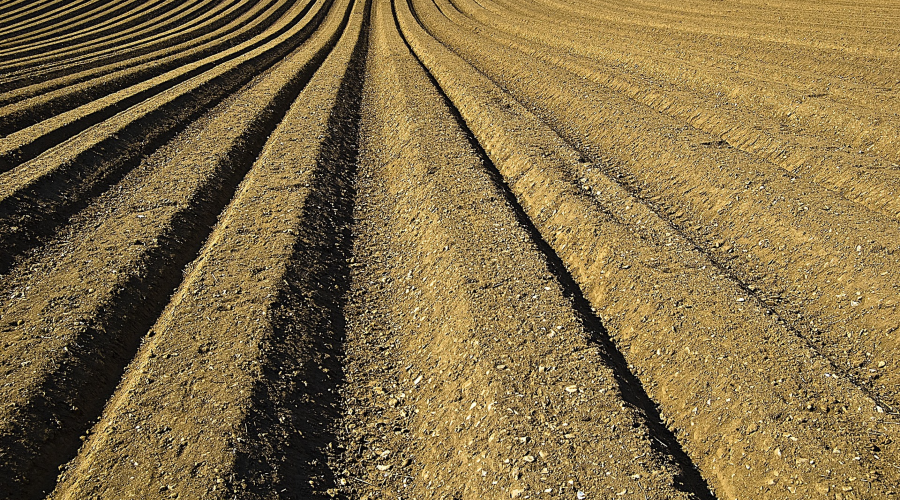 Environmental activists like Greta Thunberg argue that the world faces an existential crisis resulting from climate change caused by humans, with future impacts being disproportionately felt by young people. The Intergovernmental Panel on Climate Change (IPCC) Special Report on Climate Change and Land provides irrefutable evidence of the negative impacts of climate change on global natural resources (in particular soil, water and vegetation). Climate change results in desertification and land degradation, as observed in southern Europe, West Africa, and South and Central Asia, with adverse consequences for food security and terrestrial ecosystems. Ultimately, these impacts affect people’s livelihoods and hinder progress towards the UNs’ Sustainable Development Goals that aim to create a better and more sustainable future. Climate change has been linked to elevated greenhouse gas (GHG) emissions of nitrous oxide (N2O), methane (CH4) and carbon dioxide (CO2), which absorb heat from the Earth’s surface and radiate it back, creating a greenhouse effect and warming of the Earth’s atmosphere. This can result in extreme weather events, such as longer, more frequent, and more intense rainstorms and heatwaves, leading to damaging floods in winter and to severe droughts in summer.

The UK government has committed to reducing all GHG emissions to ‘net zero’ by 2050 (and by 78% compared to 1990 levels by 2035). Agriculture is one sector that could help deliver these ambitious targets. Currently, agriculture contributes about 10% of UK’s total GHG emissions (around 45.6 million tonnes CO2 equivalent), but this proportion will increase as other sources of GHGs, such as transport (27.5%) and energy (23%) reduce their emissions through decarbonisation. Both the UK Climate Change Committee and the Institute for European Environmental Policy include carbon capture and storage as critical levers required for agriculture to reach net zero. This has led to more scrutiny of agricultural soils’ potential in achieving this target, as soil can influence CO2 emissions and losses from farmland, as well as provide opportunities for carbon sequestration and storage. 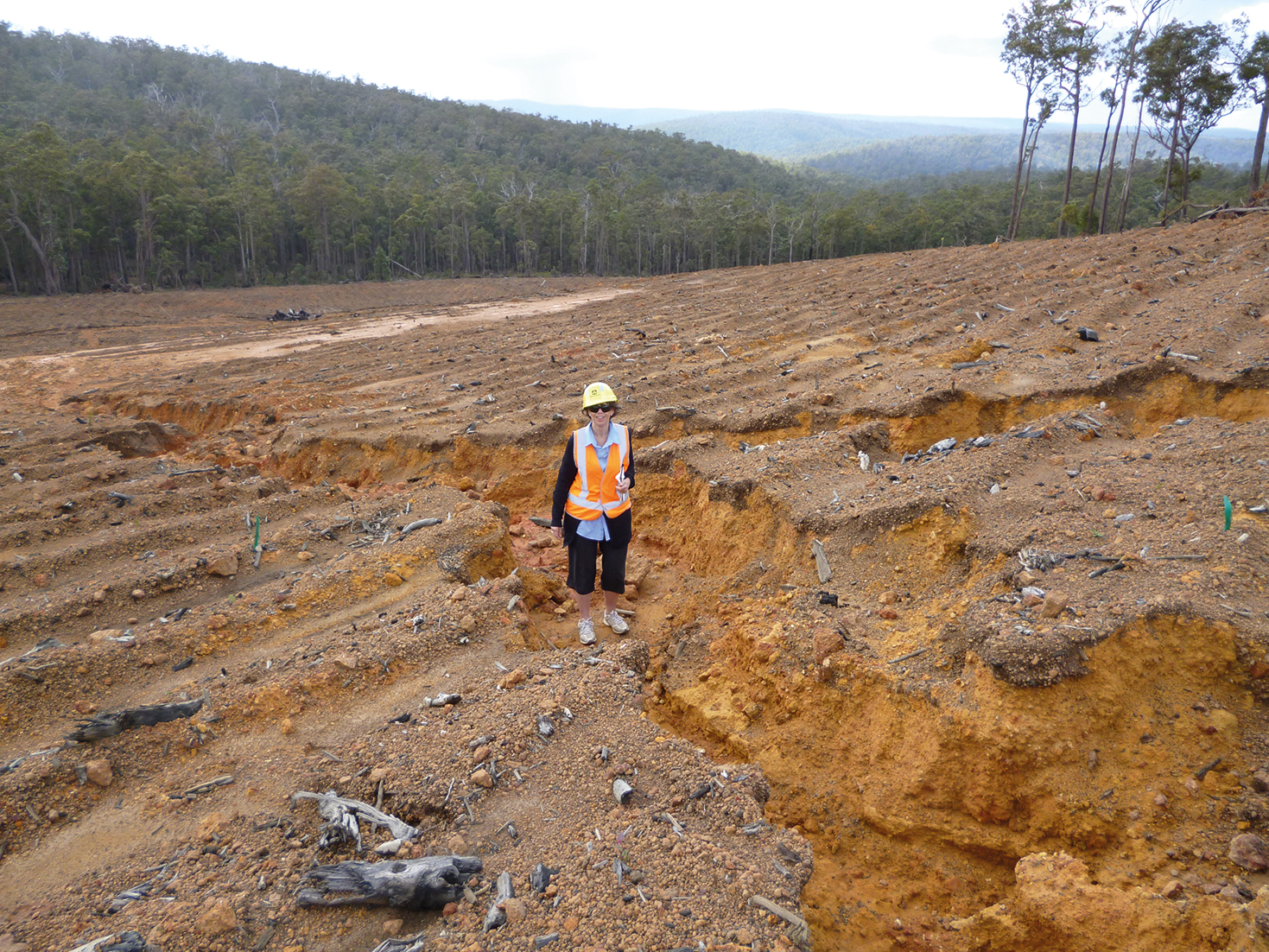 Severe land degradation (soil erosion) in Western Australia caused by high intensity rainstorms (for example, 40 millimetres of rainfall in one hour)Controlling CO2 emissions
Soil and water engineering can affect carbon losses from agricultural land. For example, traditional deep ploughing inverts the topsoil [see images below], bringing soil nutrients and organic matter closer to the soil surface to improve soil fertility. However, exposure of the buried soil organic carbon to the atmosphere causes CO2 emissions from the soil. To avoid this, cultivation tools such as discs, tines or chisels are engineered to reduce soil disturbance and minimise exposure of soil carbon. This is called ‘reduced’ or ‘conservation tillage’, also known as minimum, strip or zero tillage (cultivation of land for growing crops). These practices do not turn the soil over and only disturb the top few centimetres. Keeping soil carbon in place also improves soil health and condition over time, making the soil easier to work and requiring less energy (tractor power). This reduces fossil fuel consumption (and associated CO2 emissions). However, there is some concern that in the short term and on some soil types, conservation tillage can lead to poor quality seed beds and compacted soils, which need to be repaired with additional energy-consuming field operations, such as subsoiling where soil is disturbed up to 14 to 20 centimetres below the surface and the disturbance aims to remove any compaction, at least in the short term. 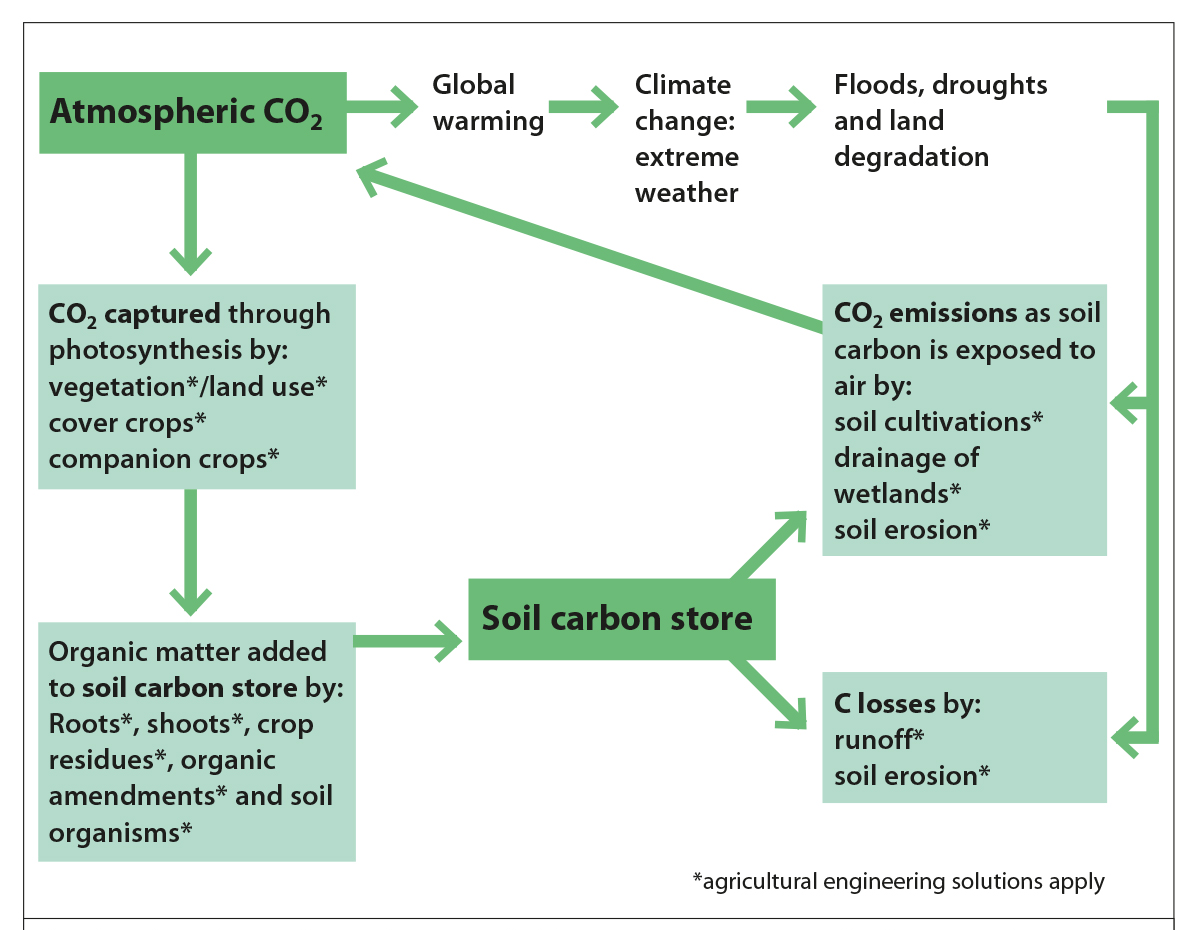 Agricultural engineering can influence carbon emissions and losses from farmland, and provide opportunities for carbon sequestration and storage Conservation tillage can also reduce soil erosion. Tillage is a process that removes surface topsoil and exposes buried soil carbon to the atmosphere, leading to CO2 emissions. Soil erosion also causes losses of soil carbon in surface run-off. By disturbing the soil less and retaining ground cover on the soil (such as crop residues), conservation tillage can protect the soil from rainfall and wind erosion. Other field engineering practices are also used to control soil erosion and associated carbon losses. Some of these techniques originate from the US, where they were developed in response to the devastating effects of poor land management during the Dust Bowl era in the 1930s while others have been used for centuries. For example, terraces – widely used in rice, wheat and barley farming in east, south and southeast Asia – are field engineering structures that are designed and constructed on steep slopes to reduce slope length and steepness, so controlling surface run-off and soil erosion. Grass buffer strips, planted on the contour at regular intervals, act in the same way. Agricultural engineers also design and install lined channels and waterways on steep slopes to control soil erosion and prevent the associated carbon losses to the atmosphere and in surface run-off. 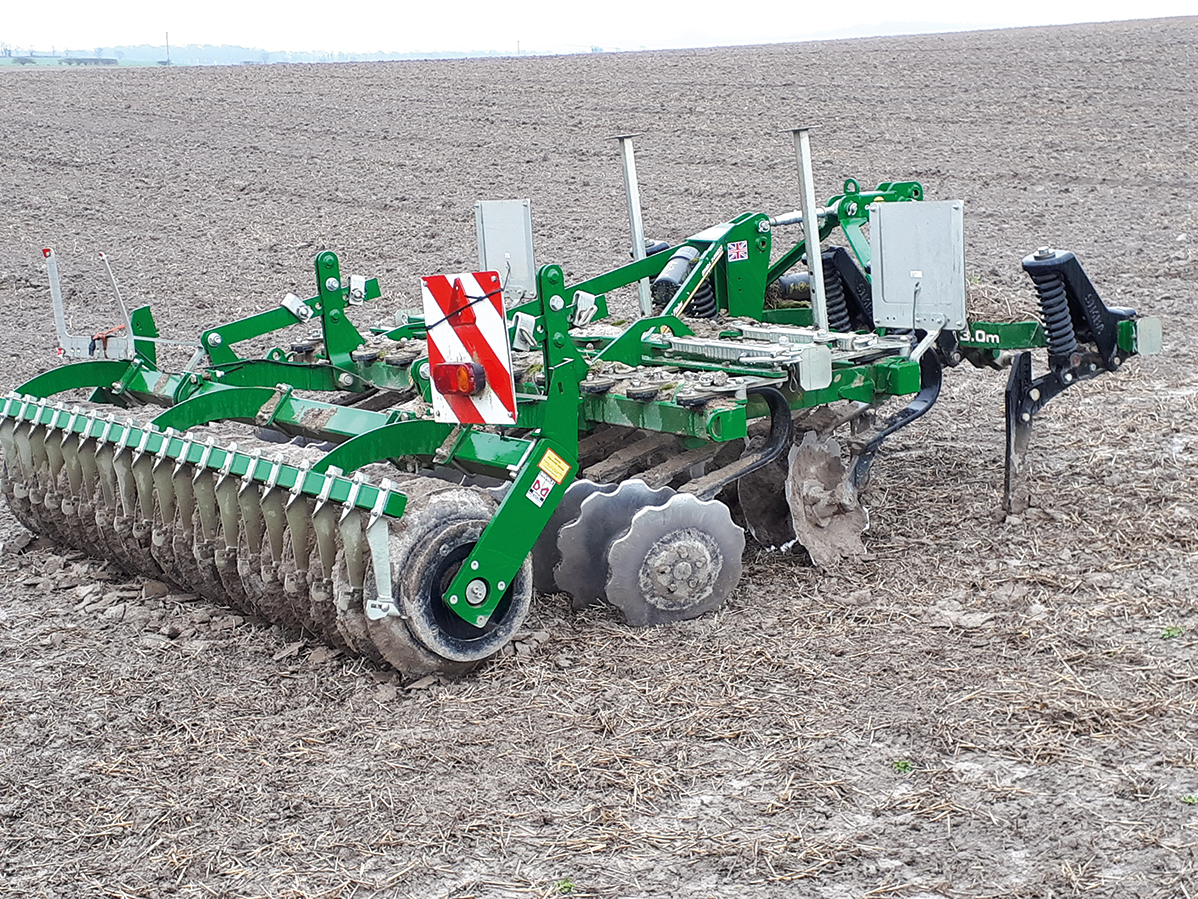 Discs and tines are designed to cultivate only a narrow seedbed so that buried soil carbon is not exposed to the atmosphere, which causes CO2 emissions

Significant CO2 emissions are associated with the drying out of peat soils, which exposes soil carbon to oxygen in the atmosphere. Over the past 150 years, soil and water engineers have installed field drainage systems in carbon-rich peatland soils to increase the amount of agricultural land growing high-value horticultural crops, such as onions, carrots and potatoes. The resulting losses of soil carbon are dramatically shown by the Holme Fen posts in Cambridgeshire, where depletion of soil carbon through CO2 emissions (oxidation), shrinkage and soil erosion has led to a loss of almost four metres of organic material. (see images below). To avoid these losses, ‘smart’ drainage systems can be used to control the water table underneath the soil surface, using valves installed at the outlet of a drainage ditch or subsurface drain to regulate drainage water outflow. Using state-of-the-art information and communications technologies such as the Internet of Things, farmers can be sent notifications for when they should open or close the valves, based on the weather forecast and soil moisture status, which are monitored in real time by environmental sensors. Controlling the water level in the soil ensures that the peat is at the optimum soil moisture content that allows crops to grow, while stopping the soil from drying out.

Holme Fen was drained for intensive agricultural production. The top of these posts were at ground level in 1850, showing the loss of organic soil material through CO2 emissions, soil shrinkage and soil erosion

Carbon capture and storage
As well as controlling CO2 emissions and carbon losses, agricultural engineering can increase the removal of carbon (or sequestration) from the atmosphere. In an arable rotation, farmers can decide in some years to grow crops that can capture carbon from the atmosphere through photosynthesis. This reaction between CO2, water and light is promoted through soil management practices that maximise the amount of vegetation growing on the land, such as cover crops (which are grown during fallow times between harvesting of one commercial crop and planting of the next one) and companion crops (where a carbon capturing crop is grown between the rows of the main commercial crop). Species include mustard, radish, turnip, vetch, clover, oats, and ryegrass. The carbon sequestered by the plants via photosynthesis is returned to the soil, either as the plant material decomposes on the surface or is buried by subsequent cultivation operations. Field engineering practices (lined grass waterways) to control soil erosion and associated carbon losses in the UK. Over 19 kilometres have been installed in the UK since 2010 © R W Simmons

It is estimated that global soil resources store around 1,600 Gt C (gigatonnes of carbon), compared to only 610 Gt C stored in above ground vegetation. In 2020, researchers at Cranfield University demonstrated the effects of different conservation tillage drills’ geometry on levels of soil organic carbon. The systems that caused least soil disruption and left the highest amount of surface crop residue showed the greatest increase in surface soil organic carbon after two years (up to 1.09 t C/ha (tonnes of carbon per hectare of land), compared to the more disruptive cultivation systems, which reduced soil carbon by 2.4 t C/ha. Carbon can also be stored in soil by growing deep-rooted crops and applying organic amendments. In intensive agricultural systems, most of the atmospheric carbon captured by the plant during its lifetime is removed from the field when the crop is harvested. However, if the farmer decides to leave the residues in the field, some of the sequestered carbon can be incorporated back into the soil by tillage and cultivation. 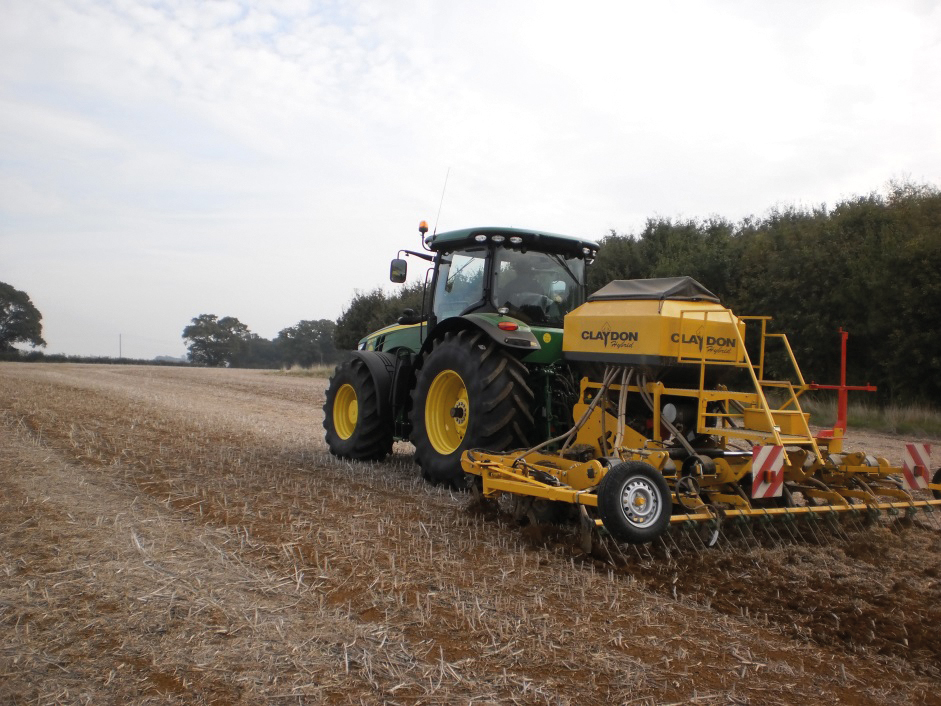 Meeting net zero targets
The IPCC warns that delay in addressing the impacts of climate change will increase the need for more widespread action in the future. As the impacts get worse with time, the number of cost-effective mitigation options available will reduce. Agricultural engineering has developed several technologies that help to decarbonise agriculture. Farmers are changing practices to reduce current carbon emissions, capture CO2 from the atmosphere, and store carbon in crops and soils to mitigate the current climate emergency. Some measures are potentially highly disruptive for many UK farming businesses, so there needs to be robust evidence to show their practicality and cost-effectiveness. To be sustainable, these practices need to bring economic, social and environmental co-benefits too. Progress to net zero agriculture will be sensitive to future UK farming and environment policies. The recently passed Agriculture Act (2020) and Environment Bill offer opportunities for politicians to incentivise the adoption of measures that will address the current climate crisis.

Biography
Professor Jane Rickson has over 35 years’ experience of research, consultancy and teaching in soil and water engineering in the UK and abroad. Her work investigates the causes and consequences of soil erosion and other forms of land degradation, which annually costs the UK economy over £1.5 billion. She is Past President of the Institution of Agricultural Engineers, a Chartered Environmentalist and a member of the Institute of Professional Soil Scientists.

How does that work? Compostable plastics

What makes some plastics compostable?