Engineers Without Borders UK (EWB-UK) started with the desire of a small group of students to work in international development, and has since grown into a nationwide organisation with direct access to over 2,700 engineering students. It sends 60 students a year on placements, and provides training for hundreds more each year. Tom Newby is a trustee of EWB-UK and writes about this rapidly expanding student movement. 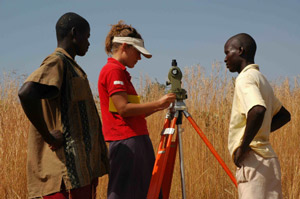 EWB-UK relies upon support from the engineering community. Here, engineering graduate Anna Tompsett is showing Nakruda community members how to use a theolodite that was leant to the project by the Environment Agency © Joe Mulliigan

Young people are highly attuned to injustices and inequalities in the world, and there is nothing more inspiring about engineering than the realisation that, as an engineer, you have the power to do something about them.

EWB-UK was founded in 2001 by a group of students at the University of Cambridge. They all shared a desire to make a contribution to international development work in a truly meaningful way, and wanted an organisation that would allow them to do so.

In the six years since, EWB-UK has developed into one of the most exciting student organisations in the country. With a mission to ‘facilitate human development through engineering’, all its work demonstrates the vital link between engineering and humanity – a link that is so often missing from engineering education and practice.

EWB-UK works to educate students and engineers about the role engineering plays in effective development work; it trains students and graduates in how to apply their skills; it funds and arranges work placements with development organisations using some of the best young engineers in the UK; and it facilitates research at British universities to support development overseas.

EWB-UK’s placements range from supervised research work for undergraduates to challenging postings for graduates with a few years professional experience. All are designed to provide the right contribution of skills to the project and the best possible learning experience for the student or graduate.

Over the last two years, four graduate engineers have worked with an isolated community in the Dadiya Region of Nigeria on one of EWB-UK’s most challenging projects. The volunteers have been working with the community to support their plans to construct roads and river crossings which will connect them to health-care, markets and other services, and greatly reduce their vulnerability to poverty and disaster.

The first pair of volunteers, Joe Mulligan and Anna Tompsett, both had one year’s experience with a consulting engineering firm prior to their placement. They worked with the community to get a World Bank grant and further funding from the UK to pay for the construction works, and initiated the design and construction of an access road.

The community of Nakruda lies by a seasonal river which is impassable during the annual rains. According to surveys carried out, many people lose their lives every year because they cannot seek medical help. The major technical challenge on the project was to design and construct a river crossing with none of the equipment normally available for such a project.

With design support from professional engineers in the UK, Joe and Anna tested a variety of foundations for the extremely sandy ground, including mini-piles. They left having completed preparatory works for the crossing and having established an organised workforce for a fully-funded project with significant inroads on the construction work.

In 2006 two more young engineers travelled to Nigeria: Benny Neylon and Annette Lucas. They completed the design work on the river crossing, drawing on the testing done by Joe and Anna, and completed the construction of a vented ford.

The construction was eventually based on raft foundations, eliminating the need for deep excavation in the sandy soil – excavation that would not be possible with spades and shovels alone. Steel reinforcement to the concrete was also eliminated – with the construction skills and methods available, it would not be possible to ensure adequate placement of reinforcement to prevent erosion.

Following Benny and Annette’s departure from Nigeria, the awful news came that the central portion of the vented ford had failed following a particularly severe flood and been washed away.

This news led to much soul-searching in the just six-year-old EWB-UK. Was EWB-UK over-reaching itself? In order to investigate the causes of the failure, and to learn all the possible lessons, a technical review of the project was carried out and was led by Dr Heather Cruickshank, an experienced development worker, trustee of EWB-UK and academic at Cambridge University Engineering Department’s Centre for Sustainable Development.

The review found that it was impossible to pinpoint the exact cause of the failure in retrospect. Although qualified engineers had undertaken all the work, the remote location had led to insufficient support for the volunteers. The lesson learned is that in future, such projects must take place with much greater involvement of senior, more experienced engineers. The review also found that EWB-UK had built strong and valuable relationships with the local community and the partner organisation; had allowed a functioning community-based development organisation to develop; and that much of the work that had been completed was of high quality and should be built upon.

Following this year’s rains two engineers, initially joined by Joe Mulligan, will return to Nigeria to complete work on fords and culverts across streams. The community has expressly asked for EWB-UK to continue its support for the project and to develop their ability to maintain their new infrastructure. In parallel, a design for a permanent river crossing will be completed in the UK, with the engineers on the ground providing the necessary information. EWB-UK and the volunteers in Nigeria will then investigate the best way to construct the crossing so the communities of Dadiya can safely cross their river.

In the years since the Nigeria project started, EWB-UK has itself developed significantly. It is almost certain that, were the project to be proposed now, it would be classed as too challenging for EWB-UK by the expert reviewing process. Despite this, EWB-UK has now made a commitment to the community in Nigeria and will put what is necessary in place to complete the project. It will also carry all the hugely valuable lessons from the enterprise forwards to inform its work in the future. Its work must do no harm, so it must learn from its mistakes and be open about them.

Although the project in Nigeria is EWB-UK’s most technically and socially challenging project, it is representative of EWB-UK’s manner of working. This is to support the plans and hopes of communities by helping remove barriers to their own development. EWB-UK does not create its own projects, it responds to the needs of developing communities.

EWB-UK’s members are inspired to recognise the power of their vocation and are trained to apply it, and yet to acknowledge its limits. Through their work with EWB-UK, members learn not only how to work with communities in the developing world, but also about financing and managing development projects on different scales, the political context in which development takes place and the international structures and organisations that underpin many major development projects. Endowing its members with the skills, knowledge and understanding that enables them to successfully carry out its work is a central theme of EWB-UK’s programmes.

Ranging from developing practical skills in engineering, fundraising, human resources, finance and more to a theoretical understanding of society, politics and other issues, only a very small part of EWB-UK’s people development comes from working directly with communities overseas. Most of EWB-UK’s members’ learning takes place through its programmes of formal training, university education, undergraduate research and outreach to young people.

The hundreds of active volunteers around the UK are all managed by a volunteer National Executive currently made up entirely of students. With the support of its ‘Professional Network’ and Board of Trustees, the National Executive manage all EWB-UK’s programmes and support systems. This is an enormous undertaking, and the dedication of the volunteers who do the work is impressive. For EWB-UK to continue developing and improving and for it to meet the astounding demand from students, EWB-UK must rely increasingly on the support of the engineering community.

EWB-UK relies not only on direct financial support, but on in-kind support from industry, academia and the institutions. As it has grown, the pressures on its systems have greatly increased. EWB-UK is not resting on its laurels. Its Board of Trustees, with expert advice from professional recruiters, accountants, engineers and professionals from the charitable sector, is developing robust financial and management strategies for the coming years.

To make these a success, EWB-UK needs to work with the engineering world to develop its website, its internal communications, its financial controls, its human resources and more. EWB-UK is currently seeking support in all these areas from professionals and companies which would like to help it develop.

Inspiring the next generation of engineers

EWB-UK sees engineering is the shaping of the world we live in, including careful consideration of appropriate technologies, sciences and social criteria to improve the quality of life of all Earth’s inhabitants. The charity’s ethos, and the ethos it instils in all those who work with it, is one of humility and respect for different cultures and communities. Its work is always carried out within the context of society and community. It also believes in continually examining what it does to decide whether it is right and how it can be improved.

EWB-UK has grown and has inspired young people because it places engineering in a social and environmental context. It demonstrates through all its activities that there is more to engineering than number-crunching and more to be achieved than making something cheaper, bigger, or faster. It is telling that at its National Conference in 2006, the most repeated comment was that student members were planning to leave engineering altogether until they got involved with Engineers Without Borders UK.

Testimonies of the EWB-UK experience

“I didn't really enjoy my engineering degree for the first two and a half years and was looking at ways to get out of engineering, but EWB really highlighted the potential that engineering has for society and I'm so glad that I'm able to be involved with it. I now feel inspired about engineering and really want to take full advantage of the skills and opportunities to make a positive contribution.”

I have discovered that it is possible to try and follow a career in something that’s interesting, fun, meaningful and doesn't involve compromising on things that you care about. There are loads of examples of people who have been involved with EWB longer than me that are doing it right now.”

What is EWB-UK’s relationship with other international EWBs?

There are EWBs or ISFs in many countries around the world. The organisations are, however, distinct and operate in different ways. They range from ISF-France, over 25 years old, to EWB Ireland, only recently established. EWB-UK works with a number of other EWB organisations on specific projects, and maintains informal links with others. The idea to establish EWB-UK first came from Parker Mitchell, one of the co-founders of EWB Canada, who completed a master’s degree in sustainable development in 2001, at Cambridge with Academy Fellow Professor Peter Guthrie OBE.

Tom Newby was part of the group of students that founded EWB-UK, and currently works as a graduate structural engineer with Buro Happold. As a trustee of EWB-UK, he is working to improve EWB-UK’s human resourcing structures for the future, and is working with Claire Curtis-Thomas MP, and with the support of the IMechE and the ICE, to establish a high-profile event in April 2008 to gather together the worlds of engineering, academia, government, and the engineering institutions, and unite them around the importance of engineering in development.