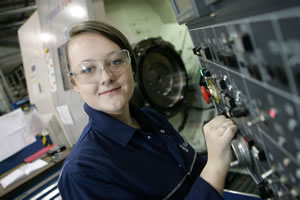 After completing her engineering apprenticeship at Rolls-Royce, Inchinnan, Nikki Cusworth was offered a job specially created for her within the company as a quality improvement technician

Nikki Cusworth, a quality improvement technician at Rolls-Royce, has become the first winner of the Inspirational Technician award. She received the award from Business Secretary Rt Hon Dr Vince Cable MP and former Science Minister Lord Sainsbury HonFREng at a ceremony held at the House of Lords in December 2011. The award was introduced in response to the 2010 National Strategic Skills Audit which highlighted a serious shortage of technicians in the UK.

Nikki Cusworth won the award in recognition of her work as a technician and for mentoring local school girls interested in technical careers. She visits primary school children and introduces them to engineering-related projects through tasks such as paper bridge building.

Nikki had originally planned to leave school at 16 and qualify as a beauty therapist, but teachers encouraged her to continue her studies and consider technical careers in engineering. One teacher suggested she apply for an apprenticeship with Rolls-Royce. “As soon as I walked through the doors and saw the technology and the state-of-the-art machinery, I wanted to be a part of that,” she said. “Listening to my teachers was the best decision I ever made.”

STEMNET and the Gatsby Foundation run the technician award and want it to help improve public perceptions of a profession in high demand by employers. The award is one of five categories within the National STEMNET Awards 2011, sponsored by the Science and Technology Facilities Council, including awards for STEM Ambassador, Employer, School club and Teacher of the year. As part of their prize, each winner received a visit to the Large Hadron Collider at CERN in Switzerland. 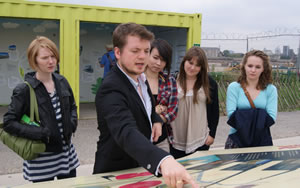 Students from Rugby High School are given a tour of the London Olympic site by George Oates, the structural engineer who worked on the Velodrome stadium for Expedition Engineering

This year’s Big Bang Fair takes place at the NEC in Birmingham from 15-17 March. The fair is a national celebration of science, technology, engineering and maths (STEM) and has grown rapidly since it was first held three years ago. This year, over 40,000 people are expected to take part in the activities provided by over 150 engineering and science businesses and organisations.

As well as providing visitors with an enjoyable day out, the fundamental aim of the Big Bang Fair is to inspire more young people to recognise the value of engineering and science and the career opportunities they provide.

Led by Engineering UK, the fair is supported by the Department for Business, Innovation and Skills. The Royal Academy of Engineering is one of the partnership organisations that helps to deliver the fair, which also includes the National Science and Engineering Competition. As part of the competition, the Academy awards a prize to the team that demonstrates the best application of engineering principles.

The winning project for 2011 saw female students from Rugby High School working with local firm Alstom in identifying a calibration system that assessed running tip clearance in steam turbine blades used to make electricity in power stations. Their prize was a guided tour of the London 2012 Olympic Velodrome and a visit to its structural designer’s offices.

In September 2011, a group of 19 young PhD and post-doctoral researchers were brought to the University of Southampton from China, Australia, Korea and the US to collaborate on finding solutions to some of the biggest challenges currently facing the carbon capture and storage (CCS) industry. For two months the collegium, funded by The Lloyd’s Register Educational Trust, focused on the technical and socio-political challenges currently slowing the global expansion of CCS activities.

The researchers were split into four competing project teams, according to their complementary skill sets. The projects included the potential to inject liquid CO2 into the deepest ocean pockets off China’s coast; designs for thermal power (gas to wire) infrastructure with CCS injection systems; and injecting CO2 into ageing or depleted oil and gas reservoirs using offshore wind energy.

The collegium produced four technical papers that were put before a panel of leading academics and industrialists who chose Offshore Thermal Power with CCS: An alternative to CO2 transportation as the winning presentation. Using proven technology at existing sites such as North Yorkshire’s Drax power plant and depleted oil and gas reserves in the North Sea, the solutions offered pragmatic, lower cost options. The mining concept used a floating production storage and offloading model infrastructure, which would be able to exploit stranded gas reserves, generate power without having to purchase land and would have the mobility to help supply to meet demand. This gave it the potential to eliminate the need to transport CO2 from the point of capture to the storage location.

The success of the residential research project has led to the approval of two more years funding for the collegium. The four CCS papers have now been published and are available at: www.lr.org/about_us/lret/collegiumbooks2011.aspx

A new report published by The Royal Academy of Engineering, Heat: degrees of comfort, concludes that there is no possibility the UK can meet its target for CO2emissions without fundamental changes to the way our homes are heated. Published in January 2012, the report addresses the challenge of matching the UK’s demand for domestic heating with the binding requirement to reduce overall carbon emissions by 80% by 2050, as laid down in the Climate Change Act 2008.

The report notes that most of the houses that will exist in 2050 have already been built. New houses should be built to the highest standard of energy efficiency but that, by itself, will not be enough to meet the 2050 targets. Major improvements to housing stock are needed, and other than undertaking basic insulation and draft-proofing, households are likely to need a financial incentive (such as substantially increased carbon taxes and/or subsidies of energy-saving technology) to persuade them to act.

Many sources of renewable energy are, by their nature, difficult or impossible to schedule. They are available only when the wind blows or when the sun shines. To switch a large part of the domestic heating load to electric heating would greatly increase the demand on the grid and increase the challenge of meeting peaks in demand. This would also require a level of generative capacity that would be almost impossible to build and would stand idle for most of the summer months, making energy more expensive. Devising methods of energy storage, regardless of source, will be essential.

A number of technologies, such as small-scale combined heat and power systems (micro-CHP), could make significant contributions to carbon reduction but are incompatible with the 80% target. This raises important questions about how to pursue targets without closing off technologies that would be helpful even if they are not the complete answer.

The report is available at www.raeng.org.uk/heat

The Bosch Technology Horizons Award, which aims to encourage young people to opt for an engineering career, is now open for entries. Supported by The Royal Academy of Engineering, the essay-writing competition is split into two age groups with cash prizes for the winners. The closing date for the 2012 competition is 20 April.

This year’s competition questions tackle environmental technology and how engineering has helped develop the infrastructure needed to host the London 2012 Olympics. The first prize in the 14-18 age group is £700, while the winner of the 18-24 age group will receive £1,000.

Last year’s winner in the 14-18 age group, Felicity Harer, used her winnings to travel to China. The research she did for her essay focused on the areas she wanted to study and the modules she would choose for her university course. She has now returned to the University of Leicester where she is studying aerospace engineering. After her studies, she hopes to pursue a career working in areas related to sustainability.

The Queen Elizabeth Prize for Engineering is actively looking for a great engineering innovation or achievement that is worthy of world recognition. The new £1 million international prize for an outstanding engineering accomplishment was launched in November 2011 by the Prime Minister, Deputy Prime Minister and Leader of the Opposition. It is now seeking an individual, or a team of up to three, to win the prize for the first time.

The international judging panel is chaired by Lord Broers, past President of The Royal Academy of Engineering, and includes a cross-section of members who have an experience of innovation across industry and academia. Nominations for an outstanding contribution to engineering that has demonstrated a global impact can be made online at www.qeprize.org A separate search panel headed up by Professor Sir William Wakeham FREng, Senior Vice President of the Academy, is seeking representation from engineering academies and industry worldwide.

A full list of the judging panel can be found at
www.qeprize.org

In his lecture to The Royal Academy of Engineering in January 2012, General Sir Peter Wall, Chief of the General Staff, and Chief Royal Engineer, analysed the contribution military engineering has made to intervention operations and post-conflict stabilisation. He is the first ‘sapper’ to head the army in over a century, and he told his audience of the continued importance of engineering in military operations.

Sir Peter pointed out that army technicians are soldiers with engineering and artisan skills as additional specialisations. In the army, engineers look after equipment design and maintenance, technical geographic support, communications and information management and field engineering, the military application of civil engineering. Field engineers conduct the technical input of army activity while considering the impact on local politics and stability. It can sometimes be used to promote more positive relations between community factions. He gave the example of his time in Bosnia, in 2001, early in the ceasefire process, when Royal Engineers staff corps used their technical expertise to work with local Croat, Serb, and Muslim engineers and other military personnel to get power station Kosovo A in Pristina back online. This secured a steady stream of electricity for the region in a project that benefited all sides.

Much of field engineering falls into two types of operation: intervention and stabilisation. Interventions, such as the NATO intervention in Benghazi in March 2011, are rapid responses to combat urgent threats and deliver humanitarian aid. Stabilisation operations, such as the 2000 response to flooding in Mozambique, are more measured and enduring, and focus on long-term infrastructure planning. Projects may include rebuilding civilian roads, restoring power supplies, and re-establishing rail and mobile phone networks.

Part-aircraft, part-airship, the new class of flying machines that are being constructed for military and civilian use

Return of the Vulcan

After a long fundraising campaign and restoration programme, the historic Vulcan bomber is flying again

What's so clever about Smart Cities?

The availability of cheaper sensors, mobile communications and data processing have opened the door to smarter cities and infrastructure