Many Paralympic athletes need bespoke or adapted equipment tailored to their capabilities to enable them to maximise their potential. There is an increasing focus on developing these not only for comfort and ease of use but also for aiding high-performance athletes in their chosen sport. Ingenia asked people and companies involved in Paralympic technology for examples of recent innovation.

When the British Paralympic team enter their respective arenas on 29 August 2012, it will mark the culmination of four years’ work training the athletes and developing and refining their equipment to give them the best possible chance to win. The 2008 Paralympics in Beijing saw Team GB finish second with a haul of 102 medals, 42 of them gold. For London, the aim is to exceed that total.

UK Sport, the organisation responsible for investing £100 million of public funds each year in high-performance Olympic and Paralympic sport, took a decision to adopt a ‘no compromise’ policy, directing resources toward the sports that were most likely to deliver medals at the Games. An important element of this strategy was the development of a research and innovation team.

Designers, sports equipment manufacturers, large engineering firms and universities were keen to offer their expertise. Partnerships were developed between universities and industry with a view to optimising the equipment for elite sport performances while ensuring the health and wellbeing of the athletes. The technology and innovation derived from these partnerships can often trickle down into development of equipment for everyday use among the wider disabled population.

Paralympic athletes have been blasted in wind tunnels, modelled in plastic and covered with probes and sensors in order to collect information that enables them to have the best possible opportunity to realise their potential at the London 2012 Paralympic Games. 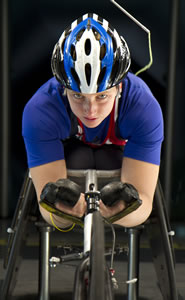 Wheelchair athlete Shelly Woods undergoing wind-tunnel testing. She was spinal cord injured at the age of 11 and became a wheelchair athlete in her teens. She holds several course records for half-marathons as well as being the British record holder for best marathon time. Shelly competed in three events at the Beijing 2008 Paralympic Games, winning a silver medal in the 1,500 m and a bronze medal in the 5,000m © BAE Systems

The best-known Paralympic athlete is the South African, Oscar Pistorius, who runs on prosthetic ‘running blades’. Originally designed by inventor and amputee Van Phillips, the blade-shaped prostheses are now produced by a number of different companies.

Otto Bock is the official prosthetic, orthotic and wheelchair technical services provider for the London 2012 Paralympic Games and makes a wide range of prostheses, including running blades.

The company has customised the socket liner and prosthesis to which a carbon fibre running blade is attached. They make each blade by building up more than 80 layers of carbon fibre, which are laid one at a time over a mould while pressure and heat are applied to fuse and harden the carbon layers. Carbon fibre is flexible and its damping property reduces the energy lost through vibration. Running only uses the front part of the foot, so the carbon fibre blades are designed without a heel, with spikes fitted to the running blade.

When the blades are fitted onto athletes without lower limbs, the potential energy of the runner is converted into kinetic energy as the amputee moves forward. As load is applied to the prosthesis, the energy is converted into elastic strain energy, which is then returned as the runner ‘unloads’ the prosthesis, helping to restore the potential energy and allowing the cycle to begin again. The more efficiently this process is carried out, the less energy the amputee needs to put in to the system to maintain a given speed.

The carbon fibre blade has evolved through the needs and responses of both athletes and everyday users. As prosthetic limbs became more dynamic, the activity levels of amputees increased, which opened up the possibilities of the running leg. While the sprinter’s use of the carbon fibre blade only requires the ‘toe’ section of the foot, prosthesis manufacturers Blatchford have developed a prosthetic foot that utilises the same properties of carbon fibre to provide a responsive heel for everyday use. Leaf spring heels are now a fundamental part of foot design. By storing and releasing energy at the right time, they enable users to develop an efficient and ‘natural’ gait.

Draft has helped athletes to win 23 medals over three Paralympics, including silver and bronze in Beijing for Team GB wheelchair athlete Shelly Woods.

While blades maximise the flexibility of carbon fibre, when it comes to track wheelchairs, top performance requires rigidity to ensure the maximum amount of the athlete’s power is transferred to the track. To test the rolling resistance, a rig is set up for the wheelchair chassis, with radio-controlled steering. Telemetry is used to give a velocity slope for design improvements, and the wheelchairs are built with American aerospace-graded aluminium 6061T6 tubes, chosen for their strength and durability.

To improve aerodynamic performance, the connections forged by UK Sport’s research and innovation programme led to Shelly Woods and other athletes being installed with their equipment in BAE Systems’ wind tunnel at Warton, Lancashire. BAE is supporting 140 British athletes and has provided 15,000 hours of expertise to UK Sport over the last four years. Instead of blasting air at Mach2 speeds designed to replicate the effects of jet-powered flight, airflow was kept to about 45 kmph.

Testing revealed that most drag-inhibiting performance comes from the athlete, not the chair. Posture was one of the first things examined. The positions of each athlete’s hands were studied, adjusted and corrected for best performance. Woods was encouraged to lean forward and subtle modifications were made to her sitting position, which reduced drag by up to 10%. Other tests gathered more data on rolling resistance, the friction of the tyres, axles and mechanical parts of her wheelchair. 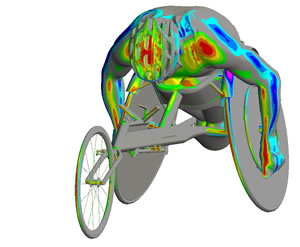 There are two types of resistance with wheelchair racing: rolling resistance, from the tyres on the ground, and air resistance, the aerodynamic drag. This computational fluid dynamic model depicts areas of aerodynamic drag on the wheelchair and athlete with areas of high drag shown in red and orange. Higher speeds are achieved in the longer wheelchair races with an average speed of 16-20 mph being maintained in races above 1,500 metres © TotalSim

UK Sport then turned to partner TotalSim to provide complementary Computational Fluid Dynamics (CFD) modelling. This enabled them to predict and improve the aerodynamic performance of the athletes and their equipment in partnership with tunnel testing.

The process begins with the scanning of the athletes to generate a computational model that could be used for CFD simulation. A baseline CFD model is then generated from each athlete’s scanned measurements to determine potential drag savings, ranging from body positioning to equipment changes.

The design development is then carried out in a computational environment, using advanced optimisation techniques originally developed for the automotive industry to test changes to both equipment and athlete positioning. This approach minimises the need to make expensive parts for testing and allows for rapid development.

The next part of the process tests equipment prototypes with directions for athlete positioning in a wind tunnel. To increase the amount of testing time possible in the wind tunnel, and to minimise disruptions to the athletes’ training schedules, rigid mannequins were made to each competitor’s scanned measurements. The performance gains and drag reductions achievable were fed back to Draft, who were able to make the design modifications. With the difference between first and third places sometimes being only tenths of a second, Shelly hopes that her new posture and refined wheelchair will make her a medal contender again at the London Games. 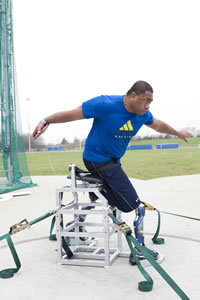 Derek Derenalagi lost his legs on active service in Helmand Province, Afghanistan in 2007. He recovered sufficiently to be chosen with a dozen other British ex-soldiers to train as competitive athletes. He is now Britain’s leading Paralympic discus thrower and shot putter. Seated discus throwers produce a tremendous amount of energy and pressure on their frame. The charity Remap tailor-made a frame strong enough to perform, yet light enough to travel with. It also had to be quick to set up to fit in with competition regulations © Remap

Not all developments in Paralympic Sport technology require computer modelling or other high-tech solutions. Discus thrower Derek Derenalagi needed a lightweight, adjustable throwing frame. To fulfill
athletic competition criteria, the device needed to be secured to the ground and assembled within a specific timeframe. Sport England got in touch with the charity Remap, a network of 1,100 volunteers who are organised into 80local panels across the UK. Volunteers include many people with engineering backgrounds as well as craftspeople, technicians, healthcare professionals and skilled helpers.

This wealth of expertise enabled Remap to design and construct a one-off piece of equipment perfectly tailored to Derek’s needs, and he will be a major contender for a medal at this summer’s Games.

It’s difficult to predict what sporting technological innovations will filter through and have an impact on the day-to-day living of people with disabilities. The blade with the heel is one example of a sports prosthetic that has become an everyday item. And wheelchairs have benefited from sports advances with full carbon fibre wheelchairs now being produced weighing just 2.1 kg. This is a boon to those wheelchair-user drivers who have to reach and lift a chair into their vehicle once they are in the driving seat.

One thing is certain, that Paralympic sport will remain at the forefront of innovation for the disabled. And many of the ideas forged for track and field events offer the opportunity of real benefits for those who face the challenges of disability in their everyday lives.

Side by side: innovation in engineering

A programme of events inspired by the Paralympics, combining an international conference, lectures, a reception and an exhibition at the Forum for engineering, 3 Carlton House Terrace, London from 27 August – 14 September 2012 with further details available at www.raeng.org.uk/events