HOW DOES THAT WORK? - AEROGELS

Dubbed ‘Frozen Smoke’, aerogels are among the lightest known solid materials. They are extremely porous, very low in density, solid to the touch and make good insulation materials. 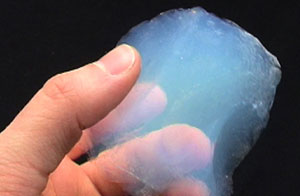 In 1931, Samuel Kistler found that it was possible to remove the liquid from gels. By increasing the temperature and pressure, he forced the liquid into a supercritical fluid state, with properties of both a liquid and a gas. By partially dropping the pressure he was able to remove most of the fluid as the vessel was slowly depressurised and cooled. With the temperature still elevated, any remaining fluid reverted to a gas phase instead of a liquid phase and on cooling to ambient temperatures so that a solid aerogel was left behind.

His discovery has recently found applications in catalysts, sensors, thermal insulation, electrical conductors, and for water treatment. NASA has used aerogels to insulate their Martian Rovers from extreme temperatures. The recently completed Stardust mission returned pristine space dust from a comet safely trapped in an aerogel net. Another NASA project, the Hypersonic Inflatable Aerodynamic Decelerator, is working on a re-entry vehicle where an aerogel coating would help protect the craft from overheating.

Possible future uses for aerogel include de-icing wings of airliners with a conducting aerogel to warm the wing surfaces to prevent ice from forming. The high surface area of carbon nanotubes embedded in an aerogel structure has been found to enable super capacitors that can be charged to power mobile phones in under 30 seconds.

From an idea by Richard Walder

The Bombay Sapphire glasshouses built in Hampshire have pushed the engineering design of glass and steel structures to the limit, creating opportunities for the materials to be used more efficiently, sustainably and at less cost in the future

The rise and rise of GPUs