A-Ultra is a portable device that uses sensors to check body armour for damage in just 10 seconds, saving time and money and making such inspections simple in even remote locations. 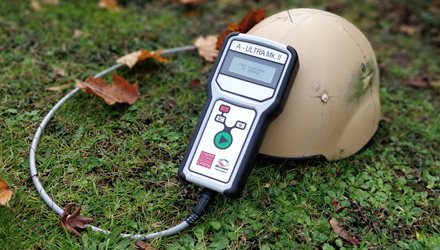 To ensure that military personnel have uncompromised protection, the British military ships around five million armour units per year from around the world back to the UK to be inspected by X-rays. This can be a time-consuming and expensive process, and presented a need for a quicker, more efficient system.

Researchers at Cardiff University were working on an aerospace project when they saw a call-out from the Defence Science and Technology Laboratory searching for new techniques for inspecting armour. Their work focused on acousto-ultrasonics, an active inspection method that involves sending out ultrasonic waves at one location on a structure and receiving them in another. If the structure is damaged, the wave is interrupted and results in a different signal. The researchers realised that this technology could be applied to checking body armour and helmets.

They partnered with semiconductor company Microsemi to develop a handheld device that can conduct acousto-ultrasonic inspections and process the results to give a simple pass or fail answer. The A-Ultra uses existing sensors in new ways, with innovative formulas powering the detection system.

Four low-cost sensors are applied to the body armour. These can be retrofitted to existing armour, but new generations will be modified to include the system from the start, which will remain in the armour for its lifespan. The sensors are lightweight and unobtrusive within the armour. They are mounted on flexible circuits that can be easily installed and fitted to various shapes depending on the application. If one sensor fails, the remaining three will still be able to give a reading.

A handheld system then scans the four sensors by using low-profile, lightweight transducers to transmit ultrasonic waves across the armour surface, which the sensors receive. The system works by creating energy – similar to a miniature earthquake – releasing it through the structure. A-Ultra then analyses the waves received and assesses the ballistic protection before giving a pass or fail response. All of this occurs in under 10 seconds.

The device’s simple pass or fail readout and one-button operation mean that unskilled workers can use it. The onboard memory can store data about inspections, and the battery-powered device is ideal for use in remote locations where power supplies can be unreliable.

In the future, the system could also have uses in protective clothing for sports, such as horse-riding helmets, or in monitoring larger structures such as aircraft, for example by carrying out quick and safe inspections of airplanes after a small runway collision. The team is currently working on making A-Ultra even smaller and building in wireless communication to make inspection in hard-to-reach locations a reality.