A Man of Learning 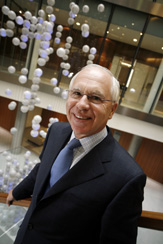 Education, education, education. If someone else had not already claimed this as their slogan, it would fit Dick Olver pretty well. It is a theme he emphasises in his role as Chairman of BAE Systems, one of the UK’s leading engineering companies. Michael Kenward found out more from this engineer who chairs Europe’s largest defence company.

Talk to Dick Olver about his career in engineering and he keeps coming back to education. The issue might not feature in the list of priorities for most FTSE 100 Chairmen but Dick believes it really is up there with running the board, “thinking strategy,” leadership and performance management. Of all these, leadership probably comes first – a chair leads in setting the tone for the things that matter, and “everybody round here knows that I'm extremely interested in education, because it is at the base of everything that we do.”

Education is something that BAE Systems can take to the outside world. That’s why Dick gets involved in activities such as the Chancellor of the Exchequer’s Modern Apprenticeship Task Force – a role he took on when he was still with BP as the company’s Deputy Chief Executive, resigning when he became Chairman of BAE, which is also keen on employing apprentices.

BAE Systems’ support for education actually starts long before youngsters reach the job market. “We do a lot with schools, primarily targeted at 10 to 13 year olds,” he says. Then he returns to the apprentices: “This company is the largest employer of apprentices in the country. We have a thousand of them at any one time, and we have about 300 a year coming in.” This is in addition to the 150 or so graduates that the company recruits each year. BAE Systems was also named Employer of the Year for apprentice programmes at the National Apprenticeship Awards in 2005 and it has one of the highest retention rates for advanced apprentices in the country.

Not Banking On It

When you do get round to talking about Dick’s own life history, it starts naturally with education and an avowed “passion” for mathematics. He did “maths,maths, further maths, and physics at school.” Dick says this whilst laughing out loud, something he does a lot. When it came to thinking about wha he wanted to do in life, he says that even when young he had an interest in people, something that has continued throughout his career. So, “I did think about medicine”. Then came a rude awakening. “I realised that maths,maths, further maths and physics didn't actually get you to that place,”he says laughing even more loudly. “The natural place to go was engineering, and I found out that there were companies that actually paid you to go to university.”

Coming out of the 1950s, life was still a bit grim. “It was the backside of the Second World War. Nobody had any money.” Family life was happy enough, but his father had been in the Second World War and so had not been able to take up his place studying engineering at Kings. Olver senior went to work in a bank, not one of the best paid professions at the time.

As such, the chance of being paid £5 a week to go to university was very attractive to Dick. An offer from W&C French, a building contractor, confirmed civil engineering as the subject to study. It also helped him choose City University over King’s, who had also offered him a place, since W&C French sponsored students who attended City.

After gaining a First Class Honours degree, the next natural step was to achieve chartered engineer status. “It was a big deal to become chartered,”he explains. “That was the next mountain to climb,” but to do it he needed design experience, and this took him into road construction and work on bridges. These were “interesting times” for bridge builders. Not only was the UK in the middle of a road building boom, but a box girder bridge fell down in New Zealand. It was all hands to the pumps to check that UK bridges wouldn’t suffer the same fate.

A Window On The World

Here, despite his relative inexperience, Dick found himself an expert in one of the newfangled tools of civil engineering. “I was one of the first students at university who had ever done anything with computers.” Computers made it easier, and quicker, to check designs, even though back then a computer was a room full of valves and could do “less than your blackberry,” as he puts it. “Somehow I got myself involved in checking every box girder bridge in the country, to see if it was going to fall down.”

With the end of the boom in road building, Dick found himself designing the same bridge again and again, as he puts it. Time, then, to look for another job, and he spotted an ad for a job as a civil engineer with BP. The company made him an offer but not one he couldn’t refuse. Thanks to the cost of commuting to work, Dick calculated that his take home pay would actually fall if he went to work for BP. By then he had a young family to keep and the money was an important factor. Unfortunately, there was still the boredom to contend with. So when BP called again six months later, he took the job. “They gave a good sales pitch,” says Dick, with their talk of “a window on the world”. A promise that turned out to be true.

Today climate change is the driving force of the energy business, attached to talk of “peak oil,” and the world has to live with steadily declining supplies. But Dick joined the oil industry in the 1970s, when OPEC was flexing its muscles and the price of oil was heading for the stratosphere. This prompted oil companies to seek alternative sources of oil, including deposits of tar sands in Alberta.

BP had leases in the Athabasca River region. “Two or three of us went out and did a feasibility study.” This was a massive mining operation, digging up oil sand and washing it to separate sand and oil to create crude. The complexity of the process was such that “the numbers did not stack up. The cost of crude from this project would always be a few dollars more than the price of oil.” This was true for the next 20 odd years, explains Dick. “But it is not true today, with oil at around $60 a barrel or more.”

The next decade or so saw a gradual shift from engineering into project management. The divorce from engineering on its own finally came when BP gave Dick the task of building the Sullom Voe oil terminal in the Shetlands. This £1.4 billion project, in 1978 money, was the world’s largest terminal at the time, bringing oil and gas on shore from the UK’s North Sea fields.

Step two in the transition from engineering to leadership came when somebody who ran the trans-Alaska pipeline came to town and wanted to talk to him about a job. Dick reported back to his boss that he couldn’t see why anyone would want to involve him, an engineer, in what seemed to be more like an accountant’s job. The response was, as Dick reports it,“that may not be the most important issue. When can you get to San Francisco?”

BP was a shareholder in the 48 inch pipeline. The project did involve some bean counting, not to mention juggling with complicated tax credits, but there was also some engineering. “We owned $1.5 billion worth of assets.” And BP wanted to expand production in the Alaskan oil fields that fed the pipeline. In 1979 Dick was appointed Vice President, BP Pipelines Inc. “I never lost the engineering context,” he says of his work on the pipeline. “But I never actually returned to designing anything.”

Learning Is for Life

Which brings him back to engineering and the role of training. Engineers, he believes, are trained in such a way that they are good at analysing problems, wherever they may arise. In particular, Dick highlights their importance in businesses such as banking. He explains that there are people in the banking sector who agree that engineers have essential skills for them.

Dick would like to tap into the banking community for help in raising the profile of engineering. If banks need engineers, he argues, then perhaps they should be prepared to join the engineers’own efforts to counter the unwelcome decline in young people studying scientific subjects.

It isn't just getting education right for the young that matters. Lifelong learning,“is really really important. If you're not learning something every day, what are you doing?” He sees it as part of his role as chairman of BAE Systems to ensure that the company has proper systems in place for lifelong learning. It has to be embedded in a company’s strategies for career development and succession.

BAE Systems has a policy of continually growing the capacity of its workforce by developing skills, knowledge and competencies to meet the challenges facing the company both now and in the future. Over 45,000 people have used the company’s dedicated online learning tools in the last three years and all employees are encouraged to include learning and development as a key part of their personal development programmes.

Focus On The Future

While Dick is happy with BAE’s approach to education, he is less satisfied by the bigger picture in the UK. Other companies and institutions, and Government also have many initiatives in place. “The thing is crying out for more coordination,” he insists. The Royal Academy of Engineering is well positioned to take a leading role in encouraging some real coordination, he adds,“so that we get a bigger bang for our buck”.

Another task for the Academy, Dick believes, and one related to the education challenge,“would be to get people thinking about engineering in this country in a very different way”. He admits that this is “a megacommunication problem”. But it is important if the UK is to set the right priorities. It isn’t just the need to sustain the flow of bright people to develop the knowledge economy that is important. We need a better understanding of such matters in how we view the economy, for example. “I worry that there is an almost entire focus on the very short term,what is happening in shop sales,what is happening with inflation. I understand why this is the case, and we need to have that focus. But what we don't seem to do is to have an equal focus on longer term R&D, technology and education.”

Engineering, then, should be everywhere. Dick even claims that it infiltrates his recreational interests. For example, he owns and sails a 55 foot yacht. Does engineering really help with this? “You can't avoid it,” he laughs. “A sailing boat these days is a series of very complex systems. And of course things that have complex systems sometimes need a little attention. One has to turn one's hand to everything. Including the electronics.”

Michael Kenward has been a freelance writer since 1990 and is a member of the Ingenia Editorial Board. He is Editor-at-Large of Science|Business online magazine. Prior to this he worked on the New Scientist for 20 years and was editor of the magazine throughout the 1980s.