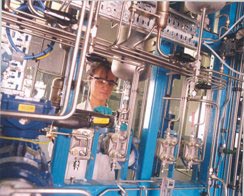 In the Davy Technology Centre, showing a section of the Mini-Plant which is used to process development and validation

Davy Process Technology, a MacRobert Award 2006 finalist, have designed a manufacturing process for ethyl acetate that employs novel engineering and environmentally considerate concepts. Mike Ashley from Davy describes how they have managed to replace non-renewable resources with bio-regenerable materials to manufacture petrochemicals.

Eight years ago,Davy Process Technology had the idea of designing a novel method of manufacturing ethyl acetate that has progressed from laboratory concept to commercial implementation in record time thanks to an innovative approach to scaling-up the technology. Ethyl acetate is an important industrial solvent which is used in printing inks and coatings. Last year,world sales reached 1.5 million tonnes. The textbook method of making ethyl acetate is by reacting ethanol (ethyl alcohol) with acetic acid, and these materials are traditionally manufactured from hydrocarbon resources such as natural gas and ethylene.

Chemists at our research laboratory in Stockton-on-Tees were working on routes to highvalue alcohols by hydrogenating esters (the class of compounds that includes ethyl acetate). They noted that, with the appropriate catalyst, they could reverse the reaction and apply it specifically to make ethyl acetate from ethanol alone.

Although this apparently simple dehydrogenation held the promise of commercial feasibility, there did not seem to be an immediate requirement for such a process. The conventional and well established technology was economically attractive and so the dehydrogenation process was shelved for a while. Then in the mid-1990s,we saw an opportunity to revive it. A South African company, Sasol, with whom we were working, mentioned that it had considerable stocks of ethanol which had been generated as a byproduct. We realised that we could use our reaction scheme to convert ethanol into ethyl acetate, an option that was economically interesting to Sasol.

The process presented some specific chemical engineering issues. Their resolution required a combination of fundamental chemical engineering research and application of state-of-theart design techniques. The first was that of maximising the yield. This required identifying and optimising a catalyst formulation as well as designing reaction conditions that would limit the formation of byproducts. A catalyst was developed that achieved the target selectivity and conversion rate. The conditions chosen were such that the feed and product materials were always in the vapour phase.

The second key issue to solve was that of purifying the ethyl acetate. It is well known that distillation cannot fully separate ethanol and water – only 96% purity for alcohol can be achieved. This is because the two components form an azeotrope, which means that the composition does not change when the mixture boils and becomes a vapour. Ethyl acetate and ethanol, and ethyl acetate and water also form azeotropes, making separation even more problematic.

The solution we found relied on the fact that these azeotrope compositions vary with pressure. By running two distillation columns in tandem but at different pressures, it is possible to cycle the distillate between the columns in a way that effectively separates pure product (ethyl acetate) in one column and ethanol for recycling in the other column.

A further problem then came to the fore. The product contained some organic byproducts that stubbornly survived the distillation process. The answer was to introduce a second reaction step prior to distillation, which involved selectively hydrogenating these impurities back to ethanol. This required the development of another specially designed catalyst.

From Start To Finish

Consequently, our final process consisted of several steps. Dry ethanol is first heated and vaporized, before entering a multi-bed catalytic reactor where it is dehydrogenated. Because the reaction is endothermic, the vapour is reheated between the catalyst beds to maintain the reaction temperature. Crude liquid product is separated from the cooled outlet stream, and the overhead vapour stream contains mainly hydrogen. The hydrogen is scrubbed with part of the ethanol feed to recover the organic impurities before being exported (hydrogen is itself a valuable commodity). Some of this hydrogen is used in a selective hydrogenation step to remove the impurities. This step generates heat so we had to design the system to ensure that hotspots did not form, causing deterioration of the catalyst. This meant ensuring that the reacting materials were evenly spread across the reactor bed and that the catalyst was evenly wetted.

The stream leaving the hydrogenation reactor contains mainly ethyl acetate, unreacted ethanol and small quantities of water. It passes through the pressure-swing distillation system to separate the pure product. The unreacted ethanol is separated for recycling.

Usually new processes are tested in a pilot plant which can cost ten of millions of pounds and take several years to design and build. We, however,were able to demonstrate the feasibility of a commercial-scale plant very quickly and cost-effectively, thanks to a unique tool we had developed called the Mini-Plant. These laboratory-scale set-ups include all the design elements of a commercial plant – they are made of the same materials and subject to the same chemical and physical reaction conditions – but are operated on a scale that is as small as a quarter of a millionth of the final size. In the same way as a commercial plant,Mini-Plants are operated continuously and include much of the same instrumentation. Key process steps are fully integrated to allow the entire operation to be evaluated and then optimised.

A Mini-Plant simulates the complete process, including all the recycle streams. It generates comprehensive data relating to the efficiency of the reaction steps, the performance of the catalyst over a long period, and efficacy of separation of the products. Just as for a full-scale plant, each element is checked and tested before all the systems are inter-connected. A Mini-Plant often has more extensive instrumentation in key areas than a conventional plant, allowing each unit operation to be calibrated as part of the commissioning programme.

The result is a wealth of data that allows the entire plant performance to be determined accurately. A key aspect is the evaluation of scaling-up effects: each piece of equipment is tested to its boundary conditions and an accurate computer simulation of the entire process is then prepared. This allows us to develop a strategy for process operation that takes into account how changing conditions in one part of the plant affect operations elsewhere, for example the recycling steps.

Such a strategy is critical to the building of a comprehensive process model that will allow us to select optimum operating conditions, while taking into account reliability of control, consistency of the product and longevity of the catalysts. It was the completion of this phase that provided us with the confidence to recommend capital investment in an ethyl acetate plant within 18 months of beginning the project.

With the Mini-Plant data, a Basic Engineering Package (BEP) was prepared which was used by the selected contractor for detailed engineering and construction of the commercial plant. Sasol went on to complete the ethyl acetate plant in Secunda, South Africa in 2001. It made guaranteed-quality product at flowsheet rates within only two days of start-up and continues to produce 50,000 tonnes of ethyl acetate a year.

We soon realised that the full advantage of the process would be achieved using bio-ethanol as a feed. Fortunately, China’s chemical industry was growing rapidly and it became an obvious target market for our process. We ran our Mini-Plant again, this time with ethanol made by fermentation, which has a different profile of impurities from synthetic ethanol originating from sources based on fossil-fuels. Currently, two plants using bio-ethanol are being completed in China, one to produce 50,000 tonnes and the other 100,000 tonnes of ethyl acetate a year.

In less than 10 years this technology has progressed from a notional concept to commercial operation. It now accounts for 15% of global ethyl acetate production capacity. As ethyl acetate is increasingly preferred as an industrial solvent to other volatile organic compounds, demand has risen in recent years and we can expect this trend to continue. Although there are a number of other production routes for ethyl acetate, they ultimately rely upon non-renewable feedstocks – primarily natural gas or ethylene. In addition, they involve several steps, each with its own inefficiencies and byproduct issues.

The benefit of this new process is that the only feedstock is ethanol – produced mostly by fermentation. After its use as a solvent, ethyl acetate evaporates and the vapour is broken down by UV light in the atmosphere, into carbon dioxide and water. Since the original source of bio-ethanol is atmospheric carbon dioxide fixed by plants, there is no net CO2 contribution. Furthermore, the only byproduct is hydrogen, which has real value. We can be sure that this technology leads the way for further ‘green’ developments in plant process engineering in the future.

Mike Ashley’s career has focused on process development in metallurgical extraction, electrochemical engineering, bioprocessing and petrochemicals. He spent many years at John Brown, involved with technology and business development, before joining Davy Process Technology. He is now concerned with process technology acquisition, marketing and all aspects of the company's public relations. Mike is a Fellow of the Institution of Chemical Engineers.