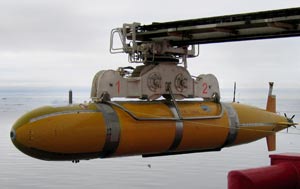 Autosub made headlines recently when it became trapped under 200m of ice in Antarctica. Here we explore the ideas behind the £5.86 million research programme, and look back at an earlier expedition which took place last summer off the coast of Greenland.

The Autosub Under Ice programme

Autosub Under Ice is a five-year £5.86 million programme exploring the marine environment beneath floating ice shelves and adjacent areas of sea ice. Ice shelves are the floating edges of the ice sheets covering Greenland and Antarctica, and they contain over 70% of the world's fresh water – enough to increase sea level by 80m if they melted entirely. But what takes place in the vast water cavities beneath the ice shelves (which can be over 1000m thick) is largely unknown. Funded by the UK Natural Environment Research Council, the programme brings together oceanographers, glaciologists, biologists, modellers and engineers from 14 institutions to investigate the role of sub-ice shelf processes in the climate system using Autosub.

The Autosub Autonomous Underwater Vehicle (AUV) was developed and built at Southampton Oceanography Centre. Capable of diving to depths of 1600m, Autosub gives scientists access to some of the last uncharted areas in the world, and gathers information for a broad range of environmental sciences.

However, there are still many challenges in using AUVs in real environments. A particular challenge is how to balance true autonomy with command and control via a communication link. Long-range acoustic communication underwater is fraught with difficulties because of time-varying dispersive propagation channels. The vehicle also has to rely on acoustic sensors to provide information for interpretation by the on-board mission management and collision avoidance systems.

The missions themselves are also risky; 18 months ago an Autosub mission to investigate Pine Island Glacier in Antarctica was threatened by deteriorating weather. The ship's captain decided to abandon the mission and retreat from an area of sea ice. His decision was the right one; the following day, pancake ice had amassed to form impenetrable sea ice that might have prevented the ship's return to open waters. Last summer, Autosub’s latest Arctic cruise looked to be heading the same way…

The two-part Autosub expedition took place in the summer of 2004 off the coast of eastern Greenland. The first part, led by Professor Peter Wadhams of the University of Cambridge, focused on measurements of sea-ice thickness off north-east Greenland using the vehicle's multibeam sonar. The second, led by Professor Julian Dowdeswell of the University of Cambridge, was a multidisciplinary study of the geology, oceanography and marine biology of the glacier-fjord-shelf system of Kangerdlussuaq Fjord in sout-heast Greenland using sonar, a suite of physical sensors and a high-definition still camera. The vehicle gathered unique data in all of these areas.

After successfully completing a 24-hour mission under 140 km of continuous ice gathering sea ice thickness data for Professor Wadhams' group, Autosub was due to return to its launch point outside of the edge of fast sea ice. But, after the mission had begun, strong winds from the east caused drifting sea ice to pile against the edge of the fast ice. By the scheduled recovery time, the rendezvous point was covered by shifting ice floes, making it extremely risky for Autosub to surface.

The newly-developed acoustic homing system was then put to the test to redirect Autosub to a safe, ice-free recovery site where the vehicle could surface and return to the ship, RRS James Clark Ross. A low-frequency acoustic homing beacon was lowered into the water from the ship. On the AUV, a trio of acoustic transducers formed an ultra-short baseline navigation system, where the angle of arrival of the homing signal was determined and instructions were issued to the

vehicle's mission management system to home to the acoustic signal rather than its preset final waypoint. While the receivers on the vehicle were in an acoustically quiet environment, those on the ship listening for telemetry from Autosub were not. As a result, at a distance over 4km at first, contact between Autosub and the ship was poor and intermittent.

It was seriously nail-biting stuff. Dr Ken Collins, the Autosub Under Ice Science Coordinator, wrote in the web diary that was posted daily: “The captain positioned the ship in a small gap in the broken ice. Normally we would have stayed in one spot using the ship's dynamic positioning system. However, the ice was drifting fast. The captain steered the ship against the current and wind so that the ship stayed with the open patch of water, all the time with the homing beacon hanging below the ship.

“We were gripped as we watched the acoustic tracking computer screen count down the distance to the ship. At 250m range, just clear of the ice surrounding us, the signal was given for Autosub to surface. And it did – five agonising minutes later. There was huge relief when Autosub was back on board before the ice closed around us. We don't carry a spare £1.5millon Autosub!”

Transferring data from the vehicle, the scientists learned that it had not been an easy underwater mission, even before the drifting ice arrived. Data showed that the vehicle had altered its depth several times to avoid deep ice keels, icebergs and a shoaling seabed quite unlike that on the chart. More remarkable, even to the engineers who had programmed the collision avoidance system, Autosub had had to negotiate an extensive obstacle 30m below the surface on its way back – a seabed bank which blocked the way. Operating entirely autonomously, the vehicle turned and retreated along its track, turned again, and tried at an offset to the left of the intended track. Finding its path still blocked, the vehicle retreated again and tried an offset of double the distance to the right, succeeded in passing the obstacle and manoeuvred back on track.

This demonstration of Autosub's ability to 'think for itself' marked a significant milestone in the advancement of AUVs used for polar exploration, and illustrates the interplay of autonomy versus command and control.

It is with sadness, therefore, that we learned on 16 February 2005 that a mechanical failure had left Autosub stranded 17km into the cavity of the Fimbul ice shelf in Antarctica. Only a few days earlier, the mission had been highly successful, as Autosub became the first vessel to enter the waters beneath Antarctica and gather environmental data and images. It is now unlikely that the AUV will ever be recovered. However, as engineers, we learn from such setbacks, and a new Autsoub will be unveiled in September.

About the Autosub Under Ice programme

Autosub Under Ice has been established to investigate the marine environment of floating ice shelves with a view to advancing the understanding of their role in the climate system. Fieldwork for the programme comprises three seasons in Antarctica and Greenland, using Autosub to gain unprecedented access to ice-covered regions.

Some of the questions motivating the programme are:

The scientific theme of Autosub Under Ice is multidisciplinary and the programme seeks to build an active and collaborating community of researchers.

Professor Gwyn Griffiths is head of the Underwater Systems Laboratory at Southampton Oceanography Centre. He has been involved with Autosub from concept to operations over the past ten years.

Terminal 5: History in the Making

A new approach to project and design management

An insurer’s look at the risk implications of nanotechnology