Early warnings are essential for reducing the scale and cost of flood damage. Fortunately, the latest computing technologies will enable us to monitor the environment more closely in the future. Professor De Roure from the University of Southampton explains how the application of pervasive computing can be used to anticipate flooding.

The devasting effects of the recent tsunami in South East Asia shocked the world into recognising the need for early warnings of natural disasters. Last August, the Boscastle flooding also hit the headlines when homes and infrastructure were swept away in a matter of hours. The flood trend in the UK is increasing, and last year climate change experts predicted that the cost of damage caused by flooding and coastal erosion in Britain could rise 20-fold over the next century.

In this context, more effective flood alert systems are vital, and ‘pervasive’ computing may hold the key to developing these further. Pervasive computing refers to the increasing pervasiveness of computing devices in our lives, and has been the subject of research for well over a decade. These devices are not just for personal use, but are also embedded in our surroundings and everyday artefacts; for example, there are now a growing number of processors inside our electrical appliances and cars.

Pervasive computing devices therefore provide an exciting opportunity for the intelligent sensing and monitoring of the natural environment, such as measuring water levels and air pollution. This can be combined with recent research that has given us the chance to harvest energy from the environment to provide self-powered microsystems.

The need for early warning systems

Traditional systems gather information to gauge the potential flooding threat using data loggers to store measurements until the data is collected in person or via telemetry. As a consequence, existing monitoring is sparse and data is often collected manually, providing only limited information from which to assess both the likelihood of flooding and scale of the subsequent damage.

Since flood damage represents a major cost, more effective warning systems are needed, particularly as flood risk may be increasing due to land-use change, climate change and flood-prone investment. The Environment Agency has undertaken considerable work in this area by investing in defences, research into predictive monitoring and preventative technologies, and by disseminating information and providing early warning and advice.

However, surface and groundwater flooding continues to present a significant potential hazard. Within the built environment there are also considerable uncertainties based on the flow routing and the interaction between surface and subsurface drainage. Unfortunately, both rural and urban flooding and response are complicated by the predominant inability to model roughness and flow routes to a reasonable level.

The FloodNet system, sponsored by the Department for Trade and Industry as part of the Next Wave Technologies and Markets Programme and developed by the Centre for Pervasive Computing in the Environment at the University of Southampton, is currently investigating the use of pervasive computing and grid technology to provide early warning of possible floods.

When a flood occurs, the cost of the damage caused has a clear correlation with both the depth of the flooding and the amount of advance warning time given. Applying pervasive computing technologies on the floodplain offers the potential to obtain better data from which to make predictions and to improve warning times significantly.

FloodNet currently uses wireless sensors deployed around a stretch of river in Essex which was chosen on the basis of its tidal behaviour. This ensures that, for test purposes, there are regular variations in the water level. The sensor nodes then collect information about the local environment which is fed through message broker and microbroker technology (developed by IBM) back to the University of Southampton. The information is stored on a grid where it informs the flood simulations which are then used to make flood predictions.

With wireless communications and energy drawn from local sources, devices can be deployed without the constraints of wiring them up, and data can be conveyed whenever it is needed. Significantly, these technologies also make it possible to deploy more devices to obtain more data more often. This greater quantity and richness of data will have a powerful impact on environmental monitoring and decision-making. 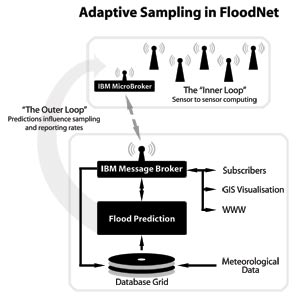 Deploying devices in the natural environment creates a number of challenges. Devices must be accessible and able to withstand harsh environmental conditions. They also need to run for considerable periods of time and make use of available power sources, so conserving energy is hugely important.

This fundamental trade-off between the need for timely data and the need to conserve energy is the research focus of the FloodNet project. Taking sensor readings consumes power but transmitting the data takes significantly more energy. The more often a sensor sends data, the more likely it is that the device will have insufficient power to continue to function. There may also be large numbers of nodes that need to have co-ordinated behaviour, whilst at the same time we have to assume that there will be temporary or permanent node failure.

The FloodNet team addressed this challenge by making the system adaptive so that the sampling and reporting rates of the devices varied according to need (see Figure 1). This is achieved through a series of control loops. The nodes do not necessarily use a simple one-way data stream over a communications network: elements of the system make decisions about which data to pass on so that power use is minimised and information content maximised.

To design the adaptive sampling algorithms, FloodNet built a simulator for a large number of nodes (see Figure 2). This allowed us to design for larger scale deployment with multiple clusters of nodes of varying sizes, and then generate solutions for our particular configuration of deployed nodes.

The adaptive sampling is mediated by the use of a predictor model which controls the behaviour of each node. The outermost control loop enables the flood predictions to influence the reporting rates of individual nodes so that closer monitoring can be achieved in anticipation of a possible flood. The inner loop is the peer-to-peer behaviour of a set of nodes which can communicate with each other but have no external communication. Other possibilities include one node – such as the ‘gateway’ – taking a co-ordinating role.

The main advantage of an adaptive sampling approach is that it capitalises on variations in sampling and reporting rates of the nodes, making maximum power available when it is needed and benefiting from a hibernation state when it is not.

In order to cope with the information generated by the nodes in a timely manner, we turned to grid computing. This technology harnesses the power of multiple networked computers in order to achieve computations not otherwise possible. We found that by running multiple flood simulations simultaneously we could automatically try out ‘what-if’ scenarios, and these were informed in near real-time by an incoming stream of data – a factor which posed new challenges for grid computing.

The goal of projects like FloodNet is to produce information about the environment, and it is important that the information can be combined easily with other sources, since it is the fusion of multiple information sources which leads to valuable information to support environmental decision-making. To make this possible, we adopted technologies from the Semantic Web, the next generation of the World Wide Web, in which information is given a well-defined meaning, better enabling computers and people to work together. This enables us to obtain maximum benefits from the environmental data gathered and to ensure that the sensor nodes can inter-operate with other systems in the future.

FloodNet effectively demonstrates the potential of using pervasive computing in the environment and highlights solutions to important issues, such as adaptive sampling for prioritised data gathering and energy conservation. It has enabled innovation within the environmental application and has also provided an important case study to explore the relevant research and development issues in the computer science field, bringing together three major trends in computing – pervasive computing, grid computing and the Semantic Web – with the emerging field of autonomic computing. We plan to take this project forward, together with the other projects in our Centre for Pervasive Computing in the Environment, to provide cost-effective wireless alternatives that will enhance existing monitoring solutions and develop advanced monitoring solutions for future deployment.

FloodNet effectively demonstrates the potential of using pervasive computing in the environment and highlights solutions to important issues, such as adaptive sampling for prioritised data gathering and energy conservation.

The DTI Next Wave Technologies and Markets programme: www.nextwave.org.uk

FloodNet’s partners are ABP Marine Environmental Research Ltd, Halcrow Ltd, IBM, Multiple Access Communications Ltd and the University of Southampton. The author wishes to thank Dr Craig Hutton, FloodNet Project Manager, for his assistance in the preparation of this article.

The Triumph of Technology

How To Land On Titan