On The Right Wavelengths 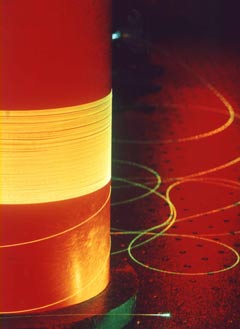 Researchers continue to discover more about the electromagnetic spectrum three centuries after Isaac Newton laid the foundations for today’s understanding of the nature of colour and light, and a century after Einstein’s historic paper on the quantum behaviour of light. Professor Stewart, a member of the recent Foresight project, highlights technological opportunities in all-optical data handling, manufacturing with light and non-intrusive imaging.

Advances in electronics and materials continue to enhance our ability to exploit the electromagnetic spectrum. For example, new sources and detectors have opened the door to terahertz imaging with the potential for safe, reliable and cheap security systems that can detect weapons and explosives at a distance.

While the UK has played a major role in developing that science since Newton first described the spectral nature of light three centuries ago, British companies have missed many technological opportunities. To help to change this, the Office of Science and Technology (OST) set up the Foresight project Exploiting the Electromagnetic Spectrum (EEMS) to investigate the scientific and technological possibilities available within the whole electromagnetic spectrum and to highlight the most promising opportunities.

The EEMS project is a part of the latest round of Foresight Projects that the OST is managing on behalf of various government departments (see also ‘A new climate for flood planning’ by Edward Evans and Jim Hall, Ingenia, issue 21). The EEMS Foresight Project brought researchers and industry together to review the best science and those areas with greatest potential for technological and economic impact. The project concentrated on four topics:

An assessment of the market potential for each topic showed that, for example, the UK could capture a market of $0.5 billion within 10 years in fast optical switches, if it invested now in the UK’s excellent science expertise in this area. The market potential for manufacturing with light could be even larger. Lab-on-a-chip systems alone could generate a $5 billion market for the UK as a platform technology for multi-diagnostic applications, including diabetes treatment, health monitoring, drug targeting and cancer detection.

The decision to consider all-optical data handling addressed an area where moving to a different part of the electromagnetic spectrum has already revolutionised an important area of technology. Over the past 20 years, optical fibre has become the dominant long-distance transmission medium for data communications, with copper wire (or radio) used mainly for the ‘last mile’ link to the user.

Although data is now transmitted optically along optical fibres, routing and switching is mostly done electronically. The existing approach is both cost-effective and can meet the demands for data traffic now and in the near future. But optical switches will have to play a role in 10 years or more if traffic volumes continue to grow at their current rate of 50 to 100% a year.

The cost and energy burden of converting signals from optical to electronic and back again when processing and routing becomes ever greater as data networks become more complex and data rates increase. We could avoid conversion overheads by performing these functions optically. We will then need optical techniques to form an increasingly large part of switching and routing systems.

The State of the Science Review commissioned for the EEMS project showed that it will not be easy to move switching into the optical domain. For example, the report points out that “the lack of optical memory is the Achilles’ heel of optical data handling”.

The rewards, though, could be huge. Photonics in data processing will open entirely new fields that current technology simply cannot achieve. These include grid computing and quantum information processing, which could be two of the main drivers of technological advance in the next two decades. 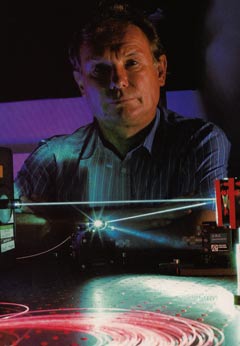 The second area of technology investigated by the EEMS project, manufacturing with light, may, paradoxically, have benefited from the hiatus in telecoms markets that hit R&D in optical telecommunications. A number of businesses that had pinned their hopes on developing laser systems for telecoms refocused their attention on the use of light for other purposes, including manufacturing. The real revolution here has been the rapidly declining cost of laser power. Not only have lasers themselves got cheaper and more efficient, but, just as Moore’s Law delivers many more transistors per chip, new lasers deliver many more watts per unit. Over many years there has been an overall annual decline of a factor of two in cost per watt.

Lasers have long been used for precision machining but as control becomes ever finer and faster, light now offers the ability to manipulate matter on a molecular scale. More and more new developments in microelectronics, integration and micro- and nano-technologies require three-dimensional structures, often made from materials that are difficult to work with. Laser, or photonic, machining can handle a wide range of materials and is surprisingly gentle – it can cut soft and biological materials without damage.

A particularly promising application of laser machining is in the fabrication and operation of an advanced integrated labon-a-chip (LoC), an area where the UK is in a strong research position. LoC devices are now mainly passive micro-arrays of up to tens of thousands of test sites with specific molecules or chemicals testing for a particular function. An integrated photonic LoC would actively sort molecules or particles using arrays of lasers, ‘optical tweezers’.

Non-intrusive imaging was another area of technology that made it on to the EEMS project’s shortlist of promising areas for the UK. Healthcare and security are the most visible, and biggest, markets for imaging techniques.

Most of the electromagnetic spectrum, from very long radio waves to high energy X-rays, is used in some way for imaging. Until very recently, the notable exception was terahertz waves, which are shorter than microwaves but longer than visible light. The problem has been the lack of cheap sources. That is now changing with the availability of the first commercial terahertz imaging system through the British company, TeraView.

Terahertz radiation reacts with most common molecules, opening up many applications, ranging from the diagnosis of skin cancer to the detection of landmines. Most significant, however, is likely to be the identification of people who are a security threat, especially suicide bombers who need to be stopped before they reach a target.

At present, the only acceptable way to find a hidden weapon is to search suspects by hand. X-rays can reveal metal objects such as guns, but the health risks from low doses of ionising radiation make this unacceptable for routine use on people. Furthermore, X-rays cannot pick out non-metal objects, such as ceramic knives or plastic explosives. Terahertz radiation, however, can penetrate clothing from a distance to reveal and identify many types of hidden dense material including narcotics as well as explosives and other weapons.

Software for data analysis and fusion is essential for low-end low-cost imaging and is as important as the imaging technology itself. The UK has strengths in software and image analysis. The UK also has a leading technological position in novel security imaging devices and could capture a market value of between $0.4 billion and $5 billion.

The EEMS project highlighted one area where there could be even greater opportunities in imaging. This is the market for smart agents, sophisticated contrast materials that can ‘tag’ indicators of disease so that these show up when a patient is imaged. Smart agents could lead to highly specific molecular imaging for early and non-intrusive detection of diseases such as cancer, vascular, neurodegenerative and neurological conditions. They could also enable continuous monitoring of the action of cancer drugs, for example, enabling much more precise treatment.

Identifying smart agents is, to begin with, essentially an academic pursuit, and one where the UK has considerable expertise. A critical step in capturing markets is the identification of new smart agents. To ensure that this happens, we need to further develop the excellence of imaging science in the UK and facilitate interdisciplinary research.

The final area of technology identified by the EEMS project concerns itself more with scientific opportunities than immediate technological markets. All Foresight projects seek to explore and establish best practice for future science work. To this end, the project sought a balance between topics defined by application or market and those defined by the underlying science. The topic ‘Inside the wavelength: electro-magnetics in the near field’ is of the latter type and consequently its application areas are more diverse.

Controlling the near field could bring about many advances in efficient radio communications, reducing interference, losses, energy consumption and absorption of power by human tissue. Over smaller distances, local communications – for example, between smart devices within the home – might be carried entirely within the near field.

The near field is the confined non-propagating part of an electromagnetic field near to a surface. The field decays exponentially from a surface, within a distance of about a wavelength. These fields are part of the make-up of the electromagnetic radiation around an emitting surface, such as a radio antenna, and have been a part of antenna design for many decades. Near-field technologies are critical to developing smart antennas and integrated radio frequency infrastructure and circuitry, and to the use of radio communications within electronic systems. The UK already has a strong industrial presence in this sector.

The recent discovery, led by researchers in the UK, of composite artificial materials, ‘metamaterials,’ will allow manipulation and use of the near field in ways not previously possible. Metamaterials are opening up exciting possibilities in other areas, such as subwavelength resolution imaging using ‘superlenses’ especially in magnetic resonance imaging. Metamaterials could bring about a step-change in technological capabilities across a wide swathe of the spectrum and could unlock the potential of the near field in many application areas. They could underpin the next generation of technology in areas such as antennas, medical imaging equipment, stealth capabilities, local communications networks and bio-assays.

The challenge for researchers and for industry is to find ways to make all this happen, a challenge that is true for all four areas of R&D investigated as a part of the EEMS project. By bringing together researchers and ‘stakeholders’, the project has illuminated an exciting area of research.

The UK currently has a leading position in research in photonics, led by a small number of university groups. A key question for the future is how to maintain and exploit this resource against a backdrop of the demise of the country’s industrial research base in this field.

The work of the EEMS project has already influenced the Department of Trade and Industry in setting the priorities for its Technology Programme and its calls for research proposals. The DTI has also initiated a Photonics Strategy Group that will draw from this project to develop an action plan to exploit this sector, by identifying opportunities and challenges for the UK over the next five to 10 years.

As with other Foresight projects, the EEMS activity underlined the importance of interdisciplinary research in pushing ahead with as broad ranging a subject as the electromagnetic spectrum. EPSRC, the Medical Research Council, the Department of Health and the Council for the Central Laboratory of the Research Council are exploring ways of improving multidisciplinary working on medical imaging and the prospects for a ‘smart agent medical imaging centre’.

Smart agents could lead to highly specific molecular imaging for early and non-intrusive detection of diseases such as cancer, vascular, neurodegenerative and neurological conditions.

Will Stewart was the lead expert advisor on the Foresight EEMS Project and has worked in many areas of applied science, particularly photonics. He has worked in industrial research for many years, becoming Chief Scientist at Marconi. Subsequently he has worked independently for a number of organisations and companies, including Antenova, the OST, MoD, University of Nottingham and recently University of Southampton.

The final reports of the Foresight project Exploiting the

Electromagnetic Spectrum are available on the OST Foresight

How To Land On Titan

The Triumph of Technology