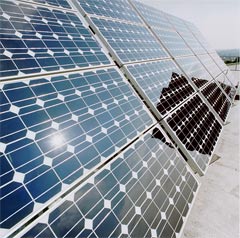 Almost all the electricity currently produced in the UK is generated from a centralised power system designed around large fossil fuel or nuclear power stations. This power system is robust and reliable but the efficiency of power generation is low, resulting in large quantities (around 60%) of primary energy being wasted as heat. Tom Markvart and Ray Arnold argue that smaller scale power supply networks could deliver substantial environmental benefits via higher energy efficiency and by facilitating the integration of renewable sources.

The evolution of energy technologies and the consequent awareness of the environmental impacts that this can bring has painted a markedly different picture of how energy could be generated and supplied. There is now a trend towards developing smaller generators, with emphasis on high efficiency and low emissions. These distributed generators connected to the distribution network do not fit easily into the traditional power generation hierarchy. There are problems caused by the intermittent nature of the generation: the output from a wind farm or a photovoltaic array depends on the climatic conditions, and Combined Heat and Power (CHP) plants are usually controlled by the production of heat.

Microgrids offer a solution which can provide a stable and reliable power supply despite a high penetration of intermittent energy sources.

A microgrid is a small-scale power supply network that is designed to provide energy for a small community. The ‘small community’ may be a typical housing estate, an isolated rural community, a mixed suburban environment, an academic or public community such as a university or school, a commercial area, an industrial site, a trading estate, or a municipal region. The key concept that differentiates this approach from a conventional power utility is that the power generators are small (often referred to as microgenerators, of a similar size to the loads within the microgrid). They are also located in close proximity to the energy users. The generators, and possibly also loads, are then managed to achieve a local energy and power balance.

This development in distributed generation has been compared by the Economist with the changes currently taking place in the telephone industry and it has been estimated that, within a decade, the market for such equipment will exceed $60 billion a year. The US Electric Power Research Institute and ABB (formerly Asea Brown Boveri) can foresee the emergence of ‘virtual utilities’ which, by analogy with the internet, will allow intelligent metering and switching. The anticipated results include reduced environmental impact, greater system reliability and lower operating cost.

Microgrids promise substantial environmental benefits through higher energy efficiency and by facilitating the integration of renewable sources such as photovoltaic arrays or wind turbines. By virtue of a good match between generation and load, microgrids have a low impact on the electricity network, despite their potentially significant level of generation. However, to achieve this, a number of technical, regulatory and economic issues have to be resolved before microgrids can become commonplace.

There needs to be precise energy and power balance within microgrids, on a timescale ranging from milliseconds to years. Over a short timescale, the power balance is linked to the question of control and frequency; over longer time scales, one needs to consider the relationship between energy supply, demand and storage. Sufficient energy must be available from the generators to ensure energy balance over longer time scales. A diversity of generation matched to the load will need to be employed if the microgrid is to be capable of stand-alone operation.

Microgrids can exist as a remote power system in regions where utility supply is not available. They may, on the other hand, be embedded in a larger electrical utility – this would be the typical scenario in the UK with its mature utility power system. An arrangement which would permit the microgrid operator the choice to operate in the ‘grid connected’ or ‘stand-alone’ mode is an uncharted territory for conventional power utility engineers, and issues remain to be resolved at both the technical and regulatory level.

Conventional utility supply operates on the principle that power is generated when it is required. Energy storage introduces a novel component in utility supply and broadens the design criteria. On a quantitative level, the size of the energy store is intimately linked to the energy balance and to the required security of supply provided by the microgrid.

This temporal mismatch between generation and load can be alleviated by managing the demand. The shifting of load facilitates achieving the energy balance and helps reduce the size of energy storage. Whilst experience exists of demand-side management at the industrial level, further experience is needed in the domestic setting.

By way of example, we may consider a microgrid of domestic users powered by micro-CHP generators and photovoltaics. Solar cells which generate mainly during summer combine well with micro-CHP driven by the production of heat. Several companies are about to introduce micro-CHP products onto the market. Powergen’s Whispergen has been pilot tested and is now available commercially. BG group’s Microgen is expected to go on sale in spring 2007. These units, powered by natural gas, are designed to supply heat for a typical house (8–10 kWh) and produce 1–3 kW of electricity.

Because of its variability, domestic load is not easily supplied by a single generator (see Figure 1). The microgrid, however, benefits from the averaging nature of a number of households, and from the smoothing effects of aggregation. Mixed neighbourhoods containing different types of loads would make matters even easier. The daily mismatch between generation and load can be bridged over with the use of energy storage: about 2–3 kWh (equivalent to 3–4 car batteries) per household will be sufficient for a typical microgrid.

For an appropriate ‘mix’ of generators – about 1.5 kW photovoltaic array per household and 50% of household ownership of micro-CHP generators – the microgrid will become self-sufficient in both electricity and heat. It could also operate as ‘stand-alone’ from the main utility – advantageous, in the case of a large-scale blackout of the grid. At other times, it may be more economic to import power rather than to generate, or for the microgrid to act as a generator, supplying power to the utility to earn revenue. The flexibility and high energy efficiency of the microgrid will make increasing economic sense if the price of fossil fuels remains high or penalties for emissions are increased.

What are the costs?

The cost of a microgrid powered by small generators need not be excessive. A significant saving will come from more efficient energy provision. Since the generators are close to the users, heat can be recovered without the need for substantial infrastructure, giving routine total energy efficiencies in excess of 80%. This compares well with 35–40% for a typical power system today.

Saving is also possible through integration. Since the generators are ‘local’, the transmission and distribution costs are reduced or eliminated. When combined into a microgrid, the generated electricity can be shared among the consumers, reducing the need to export power to the public network. There is no mechanism at present for producers of small amounts of energy at low power levels to be paid for export; this is unlikely to change in the near future. The best return that a small generator would normally expect is the ‘wholesale’ price, or one third of the ‘retail’ price.

The economics of microgeneration is about replacing a small number of large turbines/generators with a large number of small but mass produced generation units. Some of the new energy sources such as solar cells or fuel cells show little economy of scale – the cost of a solar cell array is largely proportional to the number of solar cells – in other words, to the rated power.

The House of Lords Science and Technology Committee in 2003 reported that when introduced on a commercial scale, the cost of small Stirling engines/generators will not be dissimilar to the current levels of energy provision, with pay-back periods of the order of four to five years. Photovoltaics generators are expensive but the cost has been reduced dramatically over the last decade or so, and is currently of the order of £4–5 per Watt.

An indication that longer term investment is possible comes from a number of similar projects in the UK. The Woking Energy System and the Southampton Geothermal Project are positive examples, as is the experience from building integrated photovoltaics in Germany and Japan. A ball-park figure calculation shows that such microgrids would supply electricity at a cost which is broadly comparable with the present electricity supply if the current support mechanisms for photovoltaics (currently 50% of the capital cost) were maintained. The type of microgrid considered here will then become fully commercial as the cost of solar cells is reduced to roughly half of their current price.

Not just an idea

Examples of small networks similar to microgrids already exist, and many resemble the early electricity supply networks. An elegant example of a prototype microgrid can be found at the site of a former Mont-Cenis coal mine in Germany’s Nordheim-Westfalen. The 12,000 m2 building, which houses a training academy, is powered by a 1MW photovoltaic array integrated into the roof and façade of the glass envelope structure, and by a CHP generator which is fuelled by methane escaping from the disused coal mine. A 1.2MWh battery ensures smooth integration into the local electricity supply, and the heat is used for the academy, surrounding housing and a nearby hospital.

Similar concepts are also under consideration by Ofgem as Registered Power Zones. Although not yet defined in any detail, the intention is for a Distribution Network Operator (DNO) to register a defined zone in which innovative plant and systems may be used either to generate or control power flow. Ofgem hopes to persuade the DNOs to set up and operate such zones by creating attractive financial incentives.

We know that approximately 1 million new central heating boilers are installed in UK every year. Some estimates suggest that some 8 million micro-CHP units could be installed by 2020, equivalent to about 25% of the current UK power generation capacity, and supplying about a third of the domestic heating requirement. Microgrids will then provide the optimum solution in accommodating this high level of distributed generation. At the same time, microgrids may become the power system that enables a substantial reduction in CO2 emissions without a major change to our lifestyle.

Dr Tom Markvart is Reader in the School of Engineering Sciences, University of Southampton, and the Tyndall Centre of Climate Change Research. His Practical Handbook of Photovoltaics: Fundamentals and Applications (edited jointly with Luis Castañer) was recently published by Elsevier. Professor Ray Arnold is currently working with Siemens Power,Transmission and Distribution as Technical Consultant. His experience in electricity power supply ranges from power stations and wind farms to PV in generation, and from 400kV to 433V in transmission and distribution. His particular interests include forensic engineering, power quality and the utilisation of renewable energy sources.

Tom Markvart and Ray Arnold are part of a larger Tyndall Centre collaboration on microgrids. Discussions with Koen Steemers and Jonathan Kohler (University of Cambridge) and Suleiman Abu-Sharkh and Neil Ross (University of Southampton), in particular, are gratefully acknowledged.

Academy Soiree at the University of Southampton