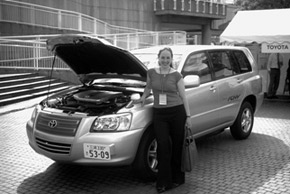 An Engineering Leadership Award (ELA) holder, Fiona Howarth used her Academy funding to investigate the potential of a hydrogen economy in various countries around the world. Following a six month placement in the Fuel Cell Team at BMW in Munich, she undertook a world tour to consider the commercial prospect for hydrogentechnology, with an emphasis on the automotive industry. Here, she shares a snapshot of some of those experiences and various initiatives she visited around the globe.

At the age of 17, I had my first engineering placement developing high speed motors at Dyson Research. However, deep down, I knew my passion lay with cars and renewable energies. The possibility of climate change, combined with a curiosity to know what we might be driving in 2050 and how to place the UK back on the automotive map, inspired me to investigate further. In an interview with a panel from The Royal Academy of Engineering, I was introduced to the concept of the hydrogen economy.

Aided by Academy funding and the Bullock Career Award from St Catherine’s College,Oxford, I was able to undertake a placement with BMW to learn first hand about some of the technical challenges associated with hydrogen fuel cells.

After graduating with my MEng, accompanied by five other graduates, plus significant Academy funding and a Travel Award from St Catherine’s, I set out to investigate the potential reality of hydrogen as a vehicle fuel in Japan, South Korea, China, Hong Kong, Singapore, Australia and the USA. Over a period of nine months we attended conferences, mingled with experts, visited companies that would host us (some with immeasurable hospitality), and scoured exhibition halls. Japan and the USA are widely accepted as two of the major hydrogen players, alongside Canada and patches of Europe, and it quickly became evident that these were going to be the countries of most interest on the tour.

Japan has few resources of its own, and with a 50% dependence on oil (of which 80% comes from the Middle East) their energy situation is fragile. The Japanese hydrogen plan is very aggressive, and they are aiming to have 50,000 fuel cell vehicles on the road by 2010, increasing to 15 million by 2030.

One of the country’s major initiatives, the Japan Hydrogen and Fuel Cell Demonstration Project (JHFC), already has over 50 Fuel Cell Vehicles (FCVs) on the road, 13 stationary fuel cells and a dozen hydrogen stations in operation, some of which could be seen in operation at the side of public roads.

Fuel cell vehicles could be experienced first hand at the 15th World Hydrogen Energy Conference in Yokohama, Japan – my verdict was very smooth, odour-free and unusually quiet! The conference also presented an opportunity to discuss the hydrogen prospect with several experts in the industry, and listen to speakers from a number of leading research and commercial organisations.

The unique selling point for hydrogen technology for cars is that the simplest and lightest element in the universe is able to provide a storage medium for energy. Through the use of electrolysis, and other nascent methods, hydrogen can be used as a buffer for often intermittent and unreliable renewable resources. Fuel cells, invented in 1839 by Welshman Sir William Grove, can then consume the hydrogen when needed to produce electricity on demand, with water vapour as the only by-product. The electricity produced is used to power an electric motor within a vehicle.

Additional constraints are imposed by the vehicle environment. Factors such as low volume, low weight and robustness in mobile, vibrating situations contribute additional concerns for manufacturers. The automotive function is one of the most difficult, if not the most difficult, application for a hydrogen fuel cell. Significantly, the cost needs to come down from the present $5,000–10,000/kW to $50/kW if it is to get within striking distance of the internal combustion engine.

The USA is familiar with security issues and is acutely aware of its heavy dependence on oil. In 2003, President Bush committed $1.7bn over five years to the United States’ FreedomCAR and Hydrogen Fuel Initiative. In California,we witnessed one of the few operational but restricted hydrogen filling points. The station at Toyota’s HQ in Torrance was able to fill a Toyota Fuel Cell Hybrid Vehicle (FCHV) in a matter of minutes.We then took a drive in the excellent, if expensive, piece of engineering. The drive felt like any other conventional vehicle, and the acceleration was particularly impressive. The FCHV has a maximum cruising range of 300 km (~190 miles), which compares to ~650 km (~400 miles) for a conventional Toyota Highlander. The Toyota HQ also sported excellent hydrogen testing facilities, having worked with the local fire department to design and build them.

California is a major location for awareness and hydrogen research and one focus is the Hydrogen Pathways Project – the result of Governor Schwarzenegger’s commitment to building a Hydrogen Highway in California. The Project Action Plan outlines the need for an early network of 150–200 hydrogen filling stations throughout the State (approximately one every 20 miles on the State’s major highways) to make hydrogen fuel available to the vast majority of Californians.

A hot topic of conversation throughout many visits was the hydrogen industry’s ‘chicken and egg’ dilemma: which comes first – the cars or the infrastructure? Without hydrogen cars operational on the roads, the demand for hydrogen filling stations is minimal and companies are reluctant to invest in the infrastructure. But without the stations, the demand for hydrogen cars will not rise because owners are unable to fill up, ensuring little increase in production and, in turn, high costs.

To underline the problem, the cost of implementing a hydrogen infrastructure across the whole of the USA was estimated by large multinationals at US$12–$16bn. This is equivalent to about $150 per car on the road today in the US. For a new car, this would represent a cost of $1,500.

Due to the incremental growth of the infrastructure, the first hydrogen vehicles are likely to be those with a set route and boundary that return to the same point regularly, such as buses, fleet vehicles, warehouse trucks and golf buggies.

California’s Hydrogen Pathways Project is an example of a government-led demonstration project helping to overcome the ‘chicken’ and ‘egg’problem for passenger vehicles. As the attractiveness of buying a hydrogen vehicle greatly increases with the availability of the fuel, logic suggests that hydrogenpowered passenger vehicles will initially be adopted in particular ‘hydrogen hubs’. The Hydrogen Pathways Project also appeared to be a catalyst for the service industry, and the development of support expertise assumed as essential, through many meetings, for the global success of hydrogen technology.

One research student at the Institute of Transportation Studies (ITS), UC Davis,was designing a form of power station where the hydrogen storage and dispensing facility could be positioned strategically with a fuel cell near an office building/industrial unit. The fuel cell could utilise hydrogen from the station to provide secure energy for local needs, while creating hydrogen demand in the early absence of hydrogen-powered vehicles. Another student considered how an abundant on-board supply of electrical energy could change the features, capabilities and shape of what we drive, possibly resulting in an on-board laptop, internal fridge and any number of electrical items becoming viable and economically attractive.

GM has considered a shape change in the design of their concept vehicle, the Hy-Wire, by placing the core components of the car on the chassis, allowing the owner to change the shell of the car. The digital drive function allows the steering wheel to be moved from one side of the vehicle to the other as desired, and completely removes the need for pedals. This can be seen in a life-size model of the Hy-Wire vehicle at the California Fuel Cell Partnership (CaFCP) just down the road from Davis.

The CaFCP came into existence in January 1999 and is a collection of eight automotive companies undertaking fuel cell research – Daimler Chrysler, Ford, GM, Honda, Hyundai, Nissan,Toyota and Volkswagen. Other stakeholders include companies such as Shell Hydrogen and BP, US government agencies, fuel cell manufacturers Ballard and UTC Fuel Cells, and other companies involved in producing components and systems for the industry.

From what I have seen and discussions I have had, significant technical developments, along with infrastructure establishment, are required before a hydrogen economy becomes economically attractive, and therefore becomes a commercial reality without government intervention.

Public initiatives are helping to drive activity and development in Japan and the USA, resulting in early adoption and accelerated technical discovery in these areas. Canada and parts of Europe are also involved in the hydrogen race, and are corners to watch. Climate change and rising oil prices are popular topics driving conversation and policy development. Coupled with the natural competitiveness of rival nations and companies, it has created an exciting and must-watch area of automotive change.

BIOGRAPHY – Fiona Howarth
Fiona studied Engineering, Economics and Management at the University of Oxford, following a gap year at Dyson Research. As part of her degree she spent 6 months with BMW in Munich, and is currently working in the Investment and Innovation Team at the Carbon Trust.

Built to Last- the Construction of Halley VI

The challenges of building a durable yet environmentally sound Antarctic station

The importance of sustainable development in engineering, and where the agenda is headed for the future

Ethics and the Engineer