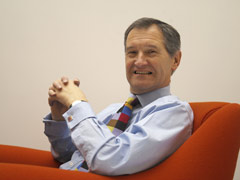 Sir George Cox, who has a background in aeronautical engineering,was recently appointed Chairman of the Design Council. This was a departure from the usual run of nominees who tend to come from the arts. When Chancellor Gordon Brown, in his 2005 Budget Statement, asked for a review on how British businesses can be made more competitive, it was Sir George who conducted the review. His final report focused on manufacturing, and encouraging the nation to make more use of its creative skills. He tells us why he accepted to undertake the task.

I had always said that I’d never do a government review. Neither the process nor my perception of the normal outcomes appealed to me. So why did I undertake the Cox Review last year?

There were three reasons. The first was that I believe passionately in the importance of the topic. Another was that I think there is a growing awareness within government of that importance. The third was that it is difficult to say no when you’ve been banging the table about something! I believe we need urgently to make far greater use of the nation’s creative skills.

We are moving into a world where creativity – applied creativity – is of crucial importance not just to individual companies but to the economic wellbeing of the nation. We have long known that in this changing world the low-skilled, labourintensive industries would move to the developing countries. This did not worry us greatly because we assumed we were going to retain the high-skill jobs, delivering high value-added products and services – a reassuring and not unattractive prospect that is now looking increasingly complacent.

The most impressive thing about the development of countries like China and India is not their vigorous economic growth, but the way they are investing in high-tech industries, research facilities, indigenous design capabilities and a highly skilled workforce.

These countries have no desire to be the world’s suppliers of low-grade, cheap labour. Indeed why should they? The future competition is for high value-added businesses and highly skilled jobs. And at the heart of such businesses lies the ability to innovate: the facility to create new ideas, whether concerned with strategies, products, processes or routes to market and to implement change effectively.

The reassuring thing is that, in a world where creativity is at a premium, the UK has an impressive record. Despite (comparative) under-investment in research our record of scientific invention is outstanding. Moreover, our creative industries are world leaders. Whether one talks of architecture, fashion, advertising, computer games or many aspects of the performing arts, UK companies and individuals are amongst the world leaders. The same is true of product design, whether you think of Jonathan Ive, designer of the iPod, or the work of British design companies, some of whom spend 80% of their time servicing overseas demand. The less reassuring thing is that too little of this creativity flows through into the rest of UK business and industry. And this is as true for the service sector as it is for manufacturing.

The challenge of my review was to find out why this is so, and what can be done about it. It had a particular focus on the smaller business and particular emphasis on manufacturing.

Announced by the Chancellor in March in the 2005 Budget, it had to be completed by November. This did not allow a great deal of time for new research (although I did commission a short study of the build up of design capability in China and other Far-Eastern countries). What I did do was to consult widely: with companies, professional bodies, business associations, trade bodies, universities, business schools, art colleges, regional bodies and government departments. The aim was to talk to anyone who had already given thought to one or other aspect of the topic. I wasn’t looking for some ‘big new idea’. Rather I was seeking existing initiatives that could be scaled up to have nationwide impact.

Eventually I settled on recommendations in five areas:

All of these affect engineers but I think the last is of particular significance. I have long felt that the training and development of engineers has been too narrow. I admit that it is changing, but not fast enough. To play a full part in the success of a company or in solving the problems of society, specialist skills need to be allied to other capabilities. Engineers need an understanding of management and of business disciplines such as finance and marketing, they need an appreciation of design skills in their widest context, and they need first-class communication skills.

Broadening the perspective within higher education would help to address this. It would also, I believe, play a vital part in tackling another issue: attracting more young people to study engineering. Too often they see such a path as career constraining. The opposite should be true: it should be seen as providing a long-term platform for a variety of possible careers. The disciplines of rigorous analysis, clear thinking and problem solving, coupled with an understanding of technology and the physical environment, should be seen as excellent preparation for a variety of careers in the 21st century.

The fact that the recommendations cover quite different areas reflects the multi-faceted nature of the issue. To my great satisfaction the Report appears to have been well received – perhaps partly because I was pushing at doors which others had already begun to open. Now comes the hard part – doing anything about it.

The Chancellor endorsed the outcome, which is a good start, but the recommendations involve action by many different parties, hardly any of them under direct government control. However, I’ve been hugely encouraged by the response. Several Regional Development Authorities are already planning to adopt the design programme for business; HM Revenue & Customs have taken on board several of the specific recommendations to make the R&D Tax Credit scheme more company friendly; I am talking to the Office of Government Commerce, the National Audit Office and the Audit Commission about stimulating more innovation within public sector procurement; the London Development Agency is commissioning a feasibility study of the proposed Centre; and several universities and professional bodies are clearly enthusiastic about strengthening the links between specialist courses within higher education.

Years in business have taught me to be realistic, and I recognise that my report is not going to change the world. To face the competitive challenge of the 21st century we need to raise awareness, broaden understanding, increase the appetite for risk, and develop a widespread capability to implement change. And we have to do it within thousands of businesses and other organisations, changing attitudes and behaviours that have been years in the making.

Sir George Cox is the Chairman of the Design Council and was formerly Director General of the Institute of Directors. He spent his early years in the aerospace and precision engineering industries before spending most of his career in information technology. He co-founded the research and consulting company Butler Cox and subsequently headed up all of Unisys’ services companies throughout Europe.

The third in a series looking at engineering’s relationship with the arts.

True Liner – The Creation of the Queen Mary 2

The logistics of designing and project managing the giant ocean liner.