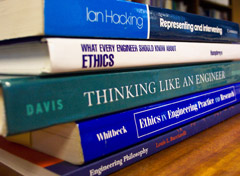 There are numerous views about what (if anything) distinguishes science and engineering. One characterisation of the distinction is that science aims to build theories that are true, while engineering aims to make things that work. The disciplines have different aims – models or theories for science, artefacts or processes for engineers. The reasons for pursuing these results also differ. Science aims to understand the world, whereas engineering aims to change it.

This distinction might indicate why the philosophy of engineering has yet to take shape. A key aspect of philosophy is the pursuit of a question – do we have genuine knowledge about the world around us?

Philosophers ask how we acquire such knowledge and whether we can ever be fully confident that our knowledge is genuine. Science’s aim of finding truth and understanding is of interest to the philosopher because, by pursuing these ends, science aims at knowledge. So philosophers turn a critical eye toward science, to assess whether it really achieves knowledge, by what means, and whether we can ever be sure that the most successful scientific theories represent genuine knowledge about the world.

It might be argued that, since engineering aims at more practical ends, it does not stimulate such philosophical reflections. However, engineering actually plays an important part in acquiring knowledge. For a start, engineering is central to theoretical science’s search for knowledge. The most fundamental physical theories are supported by experimental data which would not be attainable without engineering. The particle accelerators built to reveal the fundamental building blocks of nature would not be possible without impressive feats of engineering. It takes something like the satellite Gravity Probe B, a product of engineering rather than of ‘pure’ science, to test our understanding of the structure of time and space and the nature of gravity.

Given that many scientific theories that seek knowledge about the world involve engineering in that endeavour, engineering should surely be of interest to philosophers. There are pertinent questions to be asked about how the physical products of engineering can help us to access knowledge about the world: what exactly is the role of manufactured objects in finding knowledge, and how reliable are they? These are questions that are dealt with by the eminent philosopher Ian Hacking, but few others.

However, engineering can be seen as delivering knowledge by a much more direct route than by aiding science. There is a useful distinction in philosophy between ‘knowing that’ and ‘knowing how’. I know that London is the capital of England, and I know how to ride a bike. This is an important distinction that is obscured by the single word ‘knowledge’, and when we take it into consideration it is clear that engineers seek to acquire knowledge in all of their endeavours.

Engineering as a consequence yields highly successful knowledge about how to control materials and processes to bring about desired results. It is a way of getting to the nature of things – a voyage of discovery as much as science is. Hence engineering provides a useful case study for philosophers inquiring about the status of human knowledge.

It seems, furthermore, that the lessons philosophers will learn from engineering knowledge will be quite revealing. In their endeavour to assess whether science is successful in yielding knowledge,many philosophers of science seek to examine the idea of scientific progress. The history of science sometimes leads philosophers to make gloomy conclusions about our progress toward ever-improving knowledge of the world. For centuries Newtonian theory reigned supreme as our best account of the structure of the universe. However, relativity theory has superseded it, offering quite a different view of the large-scale universe. Before the revolution in chemistry, explanations of the processes involved in combustion were in terms of a substance called ‘phlogiston’ – a substance present in flammable materials and released on burning. We now know that no such thing exists, and we explain combustion in quite different ways.

That scientific theories undergo such upheaval leads philosophers to worry that any theory, however good the predictions it makes, might one day be overturned. They worry that the entities we currently believe in and use in scientific explanations will turn out to be as fictional as phlogiston. This is the basis of the argument known as the ‘pessimistic induction’, which runs thus: The history of science is a history of theories being refuted and rejected. If we are to learn anything from history, it is that our current theories are very likely to be rejected in the future. Hence,we have no reason to be confident that our scientific theories represent genuine, secure knowledge. Historical evidence supports a far more tentative attitude.

However, if, when thinking about progress, the philosopher focuses not just on a few cases in theoretical science, but instead turns his attention to applied science and engineering, he might reach quite different conclusions about the progress of knowledge. For, although there are revolutions in engineering, the products of engineering knowledge are not going to be overturned in the way that some scientific theories have been.

Phlogiston theory was plain wrong, and explanations in terms of phlogiston have never worked. But technologies that become obsolete do so because they are improved upon, or become redundant, and not because they have never really worked in the first place. So, while the philosopher might argue that any scientific theory might come to be rejected, he cannot claim that we might one day wake up to find that the bridges that have been constructed according to older engineering methods have all collapsed, or that all methods of transport have ground to a halt because the underpinning knowledge was defective.

This shows that knowledge of what works, the ‘know-how’ that engineering provides, is secure knowledge. Engineering knowledge is also genuinely cumulative – improved all the time by building on, and not re-writing,what went before. Hence, if philosophers look at engineering practice as well as scientific theory when they consider progress, they may not be led into scepticism. In this way, a philosophy of engineering might prove enlightening to the pessimistic philosopher!

Despite engineering’s success in securing knowledge, there is still the fact that most engineering practice aims at bringing about practical results, rather than seeking knowledge for its own sake. Is there room for philosophy within this aspect of engineering?

Peter Simons is a philosopher who studies ontology. This is generally characterised as the study of ‘what there is’, the study of the nature of being and of the basic kinds of things that exist. Within philosophy, ontology is often treated in a very abstract way, but Simons has found application for it in the practical, ‘greasy-hands’ side of engineering.

Simons’ interest in applying ontology to engineering is because of the complexity displayed by engineered artefacts (the term ‘artefact’ here refers to any object made or adapted by humans, with an intended function). His particular interest is in an area of ontology called ‘mereology’. This is the study of the relationships between parts and wholes – between sets and their members, and objects and their parts. A seminal paper co-authored by Simons and Charles Dement looks at how engineering categorises the parts of an object – what counts as a proper, complete part of a complex artefact, say an engine.

Engineers construct a Bill of Materials for any complex artefact, which is a representation of its parts and their arrangement. Engineers need to break down any product into its parts in order to design, construct and maintain it. What is problematic is that any complex product potentially has more than one Bill of Materials. This is because, for example,what counts as a single part in manufacture might be fused to another part in such a way that it no longer counts as a single part when it comes to taking the object apart, either in the process of maintenance or at the end of that object’s life cycle.

This situation is bound to give rise to problems of communication and management across the many changes in the life cycle of complex objects. Simons argues that the inherent complexity of engineering artefacts leads to complexity in the IT systems that are used in the manufacturing processes, and complexities in the organisation of the human players – designers, manufacturers, customers and so on – involved in the whole manufacturing enterprise.

Simons’ view is that we can deal with the problems posed by complexity in engineering from an ontological viewpoint. The idea would be to use methods of ontology to provide a universal, formal framework for analysing complex artefacts and the processes which govern their design, manufacture, operation and so on. This universal framework would have the advantage of allowing easier communication between those involved in different stages of a product’s life cycle. It would also mean that we could devise solutions to engineering problems that do not just fit the problem they were intended for, but which could be transferred to other situations.

Simons’ ontological approach to engineering has had some practical success. Simons and Dement collaborated with companies such as Shell, Rolls- Royce and Lockheed Martin to discuss how engineering could use philosophical ideas. They had notable success in the application of what they called ‘enterprise engineering’ with the Maintenance Tooling division at Rolls-Royce.

Simons and Dement did not offer particular solutions for managing the manufacturing process, but encouraged the division to ‘rethink’ their operations, looking at them from a different perspective, inspired by ontological methods. This approach has subsequently been used to successfully develop engineering improvement projects with Design and Make suppliers. Simons’work is interesting in that it demonstrates how even an apparently abstract area of philosophy can have palpable practical value.

Simons’ and Dement’s method involved encouraging engineers to think about their procedures from a foundational, philosophical perspective, rather than offering tailor-made solutions. Igor Aleksander FREng, Professor of Neural Systems Engineering at Imperial College London, believes that is the most fitting way to apply philosophy to engineering. He says “Philosophers would be delighted to have uncovered a debate of what is and what is not good engineering without judging the issue. It is a mistake to think that philosophers will optimise procedures. Engineers will do that when they have learned to be philosophically sound.”

A philosophy of engineering

The Royal Academy of Engineering has embarked on a project within the philosophy of engineering. The aim of this project is to gain greater understanding of the nature of the engineering profession and discipline. It is hoped that this will have many benefits, including that of clarifying in engineers’ minds what is distinctive about the profession, what its aims and goals are, its intellectual foundations and what it contributes to society and to collective knowledge. It is hoped that this will have the result of enabling communication between engineers, other disciplines and the public, thus engendering a greater appreciation of its contribution, and resulting in a greater attraction to the subject.

Dr Natasha McCarthy – Natasha studied philosophy at the University of St Andrews, LSE and King’s College London, specialising in the philosophy of science. She spent two years lecturing in philosophy at St Andrews before joining The Royal Academy of Engineering as a Policy Advisor.

The thixotropic manipulation of metallic alloys.

The third in a series looking at engineering’s relationship with the arts.