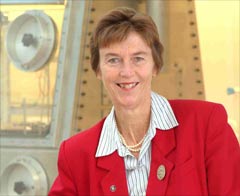 Sue Ion caught the nuclear bug as a teenager. She tells Michael Kenward that 25 years in the industry have done nothing to dampen her enthusiasm, and her belief that the world simply cannot ignore the cleanest and most sustainable source of energy available to us.

In these days of rampant Harry Potter mania, few children, especially teenagers,would choose a book called Atomic Energy as a school prize. But that is how Sue Ion took her first steps down the road to a career that has taken her to the top of her profession as an engineer. Sue is Director of Technology at British Nuclear Fuels plc – still known familiarly as BNFL – the company that has, as Governments have changed their minds and its remit, fulfilled various roles in nuclear energy. It wasn’t just the book that encouraged Sue to embark on a technical career. She attended an all-girls grammar school in Preston. “We had some enthusiastic science teachers who were keen for us to maximise our opportunities.” Sue singles out her chemistry teacher, whose influence prompted her to study at Imperial College for a degree in materials science. “It blended chemistry and physics in a way that I found attractive and challenging. I would still argue that a career in materials science, in metallurgy, opens up an awful lot of avenues to you.”

Materials science certainly gave Sue the chance to develop her interest in all things nuclear. There was even a module on the choice of nuclear materials in her third year at Imperial. “It encouraged me to think about a possible career in the industry,” says Sue. It also prompted her to stay on to do a PhD on the cladding material wrapped around the fuel in Magnox reactors. She was awarded the Matthey Prize for the best PhD in the faculty. It was while Sue was studying for her PhD that she had an opportunity to pass on the baton handed to her by enthusiastic science teachers. For two and a half years she taught physics for two half-days a week at an inner London school. The school had no facilities or labs to speak of, and many disadvantaged children. “It enabled me to see a different way of life from an extremely privileged all-girls Northern grammar school.” Sue still likes to keep in touch with what is happening in education. “It is important to maintain kids’ interest in science and engineering, and to engage them with nuclear energy, which has its controversial side.”

It might seem that science has been at the heart of Sue’s career. But even her first job with BNFL, after completing her PhD, wasn’t pure research. She worked in technical support and was involved in trouble-shooting problems in fuel manufacturing. She then moved even further away from the lab, into sales and marketing.

Thus began the jet-set phase of her career. “My job has been absolutely fantastic. I would never have had that opportunity in any other sector.” Japan, the USA, Russia – Sue has been there. “I would never have thought that I would be in the middle of Siberia, not long after the Berlin Wall fell, in what would before then have been a closed nuclear research facility”.

By the time this was happening, Sue was back in the realm of research. As Executive Director of Technology for BNFL she was responsible for all their research and development activity within the UK, in what must be one of the most research intensive businesses around. In this role Sue was in charge of more than 1,000 people on five sites.

More recently Sue has been Group Technology Director with BNFL. She describes this as more of a functional than executive role, setting policy for the whole group. “These days it is more functional oversight, interfacing with policy makers in government and contributing to the separate business units.” In 1993 Sue was awarded the Hinton Medal for outstanding contribution to nuclear engineering in the UK. A council member of the Particle Physics and Astronomy Research Council between 1994 and 2001, she has just joined the council of the Engineering and Physical Sciences Research Council. Sue is also a member of the Council for Science and Technology, the influential group that advises the Prime Minister on strategic issues that cut across the responsibilities of individual government departments. Does Sue ever get the impression that perhaps some invitations to join these powerful bodies have arrived because they were keen to acquire a woman’s viewpoint?

“I guess there are occasions when I have had an opportunity to contribute because they have had to look for gender balance in some way. There are times when women look at things differently, and interact in groups differently from the way men interact. You will always get stereotypes at either end of the spectrum. I just think that gender balance is generally very helpful.”

It was Sue’s background in education that convinced her that BNFL should try to do something about the nuclear content of academic research and university teaching. “They had almost vanished off the spectrum,” explains Sue. This lack of resources could spell disaster if the UK decided to revive its nuclear industry. Where will it find the engineers to do the work?

“The nuclear sector does have a major skills problem in terms of the supply of suitably qualified people,” says Sue. However, she admits that the image of nuclear energy doesn't help and that youngsters will think twice before considering a job in an industry that might not have a future. “They will choose something they believe has a long term future, and is exciting and challenging.”

It is when the topic turns to nuclear power that Sue becomes really animated. Like many people in the business, Sue sounds baffled and frustrated by the lack of awareness surrounding the opportunities that nuclear power offers. “When you live and work in an industry, you assume that everybody knows what you know in terms of basic facts. A lot of people don’t know the contribution that nuclear energy makes to the UK’s electricity supply,” says Sue. “They are not even aware that nuclear energy does not contribute to global warming.”

How is there such a chasm between reality and public perception? “As an industry, we have been appallingly bad communicators in the past.” There is, though, only so much that the nuclear industry can do to correct the public misconceptions, to persuade young people that this is a business with a future, and one that they should consider for a career. BNFL and others will have little impact unless the government makes it clear that there is a future for nuclear energy.

Born 1955. Graduated with first class honours in Materials/Metallurgy from Imperial College London 1976. Gains doctorate and Matthey Prize for best PhD in faculty 1979. Appointed a Technical Officer with BNFL 1979. Group Technology Director for BNFL 1992. Winner of Hinton Medal for outstanding contribution to nuclear engineering 1993. Becomes Fellow of The Royal Academy of Engineering 1996. OBE for services to the nuclear industry 2002. President of the British Nuclear Energy Society 2004–2006. Member of UK Council for Science and Technology 2004–2007. Awarded Fellowship of Imperial College London 2005. Founder member of the Energy Research Partnership 2006.

Sue isn’t making a case for nuclear energy over alternative fuels. On the contrary, she says “the demand for electricity is going to be so high that we have to keep all our options open and allow them to take their place in the market fairly. There is a place for wind power and there is a place for nuclear.” But even with the best will in the world, she insists, on their own the renewables cannot deliver what is required. “You only have to do the sums to realise that their contribution is not big enough.”

Sue feels that government inaction doesn't stop at devising, and promulgating, a coherent strategy for nuclear power. Over the years governments have abrogated any responsibility for all energy R&D. Sue points to a study that she was part of as a member of the prestigious Council for Science and Technology. The report, ‘An Electricity Supply Strategy for the UK,’ pointed out that research, development and demonstration “in the electricity generation sector has effectively collapsed”over the past 10 to 15 years. “It is just a vacuum,” says Sue. “We need to figure out a way to reverse the complete collapse of energy R&D in the UK,” she adds.

Not only is there negligible research into next generation nuclear energy, carbon sequestration or other mechanisms to make clean and efficient fossil generation, there has also been inadequate investment in infrastructure. For example, the grid cannot cope with more distributed generation of the sort that renewables bring on to the system.

It isn't just the lack of money that holds back R&D in electricity in the UK, Sue complains, but the way in which the money is spent. Funds go “in small pockets to many organisations. It is just not being effectively delivered.” The bottom line, says Sue, is that “nobody is conducting the orchestra from the top from an energy perspective.”

“We have got to recognise that some technologies require big demonstrators to bring them to reality. Equally, you can't put all your eggs in one basket." The downside, she admits, is that governments then face a choice of how many, and which, options to support. Some promising first steps have been taken recently with the launch of the public/private Energy Research Partnership led by Sir David King and Paul Golby of E.ON.

“In my view,” says Sue, “there has got to be a plan, and a road map to get us there.” Energy security and the supply of clean energy in the UK has got to be one of the biggest challenges of this century. A civilised 21st century world cannot survive without it.”

It isn't too late to provide that energy. “We have to make the case and persuade people that it is in their interests, that nuclear energy can be safe, reliable and clean. We have to put the message across in the right way,” says Sue. So it really comes back again to a need for inspired education. “In today’s society it is all about informed choice.”

Sue believes there is a tremendous opportunity for the right steps to be taken following the recently announced Energy Review Consultation, and that the Academy has a significant role to play. “The important thing is to ensure that the information is presented in a way that is understandable, and as accurate as possible, to allow the public, and policy makers, to make an informed choice.”

How communications networks have fared during recent disasters and how they could be made more effective.