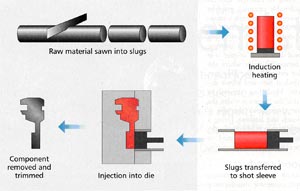 Thixoforming process: raw material which has been stirred and then solidified is sawn into slugs, reheated into the semi-solid state in an induction heater, placed into a shot sleeve (like a hypodermic) and forced into the die

Tomato ketchup is thixotropic; when you shake it (shear it) it goes runny, and when you allow it to stand it thickens up again. A few decades ago, it was discovered that some metallic alloys could be manipulated thixotropically in their semi-solid state. Professor Helen Atkinson has followed the commercial usage of these properties and makes a prediction of their increased usage in years to come.

Semi-solid processing is the means whereby a metallic alloy can be formed to shape between its fully solid state and fully liquid state. The process depends on the thixotropic behaviour of an alloy. Alloys of aluminium can be processed this way to give components with fewer defects than if they are made by conventional die-casting. An additional weight-saving advantage is gained when components which are conventionally made of steel are replaced by semi-solid processed aluminium.

Magnesium alloys have already been shaped thixotropically on a large scale and can be readily moulded to give lightweight components for mobile phones and lap tops. For aluminium alloys, manufacturers have been slow to exploit this technology, despite the clear benefits experienced by the companies that have embraced it. But continuing R&D and the expiry of patents may encourage more companies to use the technology.

In 1971 David Spencer, a PhD student working at the Massachusetts Institute of Technology,was working with Professor Flemings on hot tearing of casting alloys. He used a viscometer, consisting of a rotating cylinder inside a cup, to measure the viscosity of aluminium alloy as it cooled from a liquid into a partially solid state. As he stirred the fluid during the cooling, he found that instead of stiffening at a fraction of solid of about 20% (percentage of solid to fluid in the mix) as he expected, it remained relatively easy to stir even up to 40% solid.

The stirring was changing the shape of the solid particles from dendritic (tree-like) to globular. The particles then flowed past each other much more easily. If the alloy is allowed to stand it thickens, because the particles agglomerate forming minute ‘welds’ (see figure 1) between each other to try and minimise their surface energy.

Flemings and his group also found that as the rate of shear in a semi-solid alloy increases, the alloy stays runny even when the proportion of solid is quite high. It is this thixotropic behaviour – allowing the alloy to be cut and spread like butter in the semisolid state – which is exploited in the whole range of industrial processes now called semisolid processing.

The particular properties of thixotropic materials, when being cast, derive from the laminar flow of material into the die,because of its low viscosity and relatively low temperature. In conventional casting the flow is turbulent and therefore it entrains tiny bubbles which are potential failure points. These do not occur with thixotropic processing.

An analogous process takes place in the manufacture of ice cream. If it is stirred during cooling, interlocking bonds (‘welds’ in metals) are disrupted and globular particles are formed, giving the finished ice cream what is in effect a thixotropic quality.

Spencer and his supervisors, Professor Merton Flemings and Dr Robert Mehrabian, recognised the significance of this behaviour and carried out industrial trials establishing the feasibility of processes that they termed ‘rheocasting’ and ‘thixocasting’. In rheocasting, stirred semi-solid material is transferred directly into the die-casting machine for forming. That is, the alloy starts out as a liquid. As it cools down it is stirred, and at an appropriate point it is cast.

In thixocasting, the stirred material is allowed to solidify and is subsequently reheated before casting; in other words it starts as a solid (see figure 2). It is not necessary to stir it as it is heated; its thixotropic property has already been acquired by stirring during the solidification process. A useful attribute is that the thixotropic material can be prepared and then stored without a change in its characteristics.

The particular properties of thixotropic materials,when being cast, derive from the laminar flow of material into the die, because of its low viscosity and relatively low temperature. In conventional casting the flow is turbulent and therefore it entrains tiny bubbles which are potential failure points. These do not occur with thixotropic processing.

The first commercial products from thixotropic casting were car fuel rails, the slender tubes in car engines that carry the fuel to the combustion cylinders. These have been produced since the mid-1990s by the Italian companies Stampal and Magnetti Marelli. The tubes could not be die-cast because the inherent defects would weaken the structure and could result in potential fuel leakage. They were previously made by forging and machining – both relatively expensive processes – but are now manufactured successfully by thixoforming.

Other companies such as Vforge in the USA, and SAG in Austria, now produce a variety of components using the method (see boxes for examples). Another component currently thixoformed by Stampal is an ultra-lightweight aluminium alloy suspension component for Alfa Romeo, which replaces a steel component weighing twice as much. The aluminium component is made in one piece to ‘near net shape’ where little machining is required, whereas the steel component had to be made from several pieces brazed together.

Recently, major attention has been focused on reducing costs by removing the steps where the stirred material is frozen and then reheated for processing. The major industrial developments on this have been by companies such as UBE,with the new rheocasting (NRC™) process and THT Presses with subliquidus casting (SLC™).

US company Vforge use thixoforming to manufacture a variety of components including computer heat sinks and motorcycle,mountain bike, and automotive components.

The picture on the right shows a motorcycle chassis frame arm made in A357 aluminium alloy (T6 heat treatment condition). This is made in one piece to ‘near net shape’. It could not be made by die-casting since the required mechanical properties could not be achieved. It is weldable and the near net shape capacity eliminates substantial machining cost.

In contrast, an example where thixoforming is used because it produces leak tight components (rather than high mechanical properties) is shown below right. This is a gas control valve, again made of A357 aluminium alloy but this time in the T5 heat treatment condition – a simpler, cheaper treatment.

Almost all mobile phone covers and laptop cases are made in Japan and the Far East and are manufactured using Thixomolding. These components have to be both light and electromagnetically shielding; properties that conventional moulding could not produce.

The main advantages of thixoforming are:

However, the disadvantages of thixoforming are:

The application of Thixomolding® for the front module of Buell Motorcycles

The front module of the Firebolt motorcycle houses twin projector beam headlamps, instrument panel, electrical components and fairing. It was originally made of 22 pieces of steel which had to be joined together. Initially this was simplified down to ten pieces but these still had to be fabricated and welded. It was then completely redesigned and is now made in one ‘near net shape’ operation from magnesium alloy using Thixomolding®. This weighs about half of the original module. Moulded plastics were an alternative but would not have provided shielding from electromagnetic interference. It would also have been difficult to obtain the required tight tolerance on the dimensions.

Photos © SAG Austria C These three components are produced by SAG in Austria.

Costs may be an issue surrounding thixoforming, because of the extra processes needed, such as stirring, to prepare the material, but there is an alternative semi-solid processing route – Thixomolding® – where this does not apply. This process is similar to polymer injection moulding. Granules of alloy are fed into a screw barrel where they partially melt because of the intensive shearing action of the screw. This action also leads to the formation of the required rounded globules in the liquid matrix. The material is then injected into a die. Thixomolding uses magnesium alloys rather than aluminium because fluid aluminium attacks the screw and the barrel.

Almost all mobile phone covers and laptop cases are made in Japan and the Far East and are manufactured using Thixomolding. These components have to be both light and electromagnetically shielding; properties that conventional moulding could not produce. An allied process known as rheo-die-casting is being developed at Brunel University and shows great promise. There has also been major progress with overcoming the attack by the liquid aluminium alloy on the screw and barrel.

The perception of extra costs, particularly those associated with the feedstock material, has been a major obstacle to the wider uptake of thixoforming by the industry. Developing a wider economic picture – rather than solely the licensing agreement – depends on the consideration of many different factors. For this reason, at Sheffield University we developed a full cost analysis software package called Thixocost. Thixocost considered a multitude of costs and benefits associated with the introduction of this technology in a factory, and has since been applied by companies considering the technology in Europe and the USA. Thixocost not only speeds up analysis, but also takes a company systematically through the advantages and disadvantages so that these can be weighed up in detail.

The applications of semi-solid processing are growing significantly. The market is being further opened up by the expiry of a number of the original thixoforming patents and by the development of lower cost routes. Although the technology applies only to magnesium or aluminium alloys at present, research now underway into the use of steel alloys is likely to yield a wide range of new applications.

True Liner – The Creation of the Queen Mary 2

The logistics of designing and project managing the giant ocean liner.