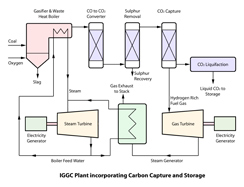 Capturing and storing carbon dioxide in a cost-competitive and safe way is a significant challenge that could achieve large-scale reductions of CO2 emissions into the atmosphere. Professor Ian Fells CBE FREng and Sir John Horlock FREng FRS look at how the UK is dealing with carbon capture, and the groundwork and timescales needed to achieve this.

The Government embarked on a new Energy Review in 2005, only two years after the publication of an ‘aspirational’ Energy White Paper in 2003. Two important themes had risen rapidly up the energy agenda and stimulated the new review. The first theme, Security of Supply, posed this question: do we really want to be dependent on imported natural gas as a major part of our gas supply? The second theme, Environmental Protection, raised the issue that the UK is not on target to meet its 20% cut back in carbon dioxide emissions by 2010, and most EU countries will not meet their Kyoto targets. Indeed UK emissions have been rising, not falling, for the last three years, largely due to the increase in coal burn in power stations and the reduction of gas usage because of rapidly increasing gas prices.

These two imperatives – security of supply and environmental protection – are, in a sense, mutually exclusive. As indigenous supplies of oil and gas from the North Sea decline, coal could become a reliable, indigenous resource, under UK control, which we could fall back on. But, coal is seen by some as a ‘dirty fuel’and produces twice as much carbon dioxide per unit of electricity produced as gas does (1kg per kWh) – and 100 times more than nuclear. If the UK is to retain coal in its electricity generation mix (currently 35%) or even increase the proportion, some way must be found to capture the carbon dioxide emitted in the combustion process and stop it getting into the atmosphere, a technology known as carbon capture and storage (CCS). On a global scale coal reserves are ten times the oil and gas reserves and if CCS can be made to work safely and reasonably economically it will make burning coal an environmentally acceptable technology.

Carbon dioxide can be captured before or after combustion. In a conventional power station – coal or gas-fired – carbon dioxide can be removed from the exhaust gases by absorbing chemically and then regenerating it, so that it can be compressed and suitably stored. The disadvantage of this capture is that carbon dioxide is diluted in the flue gas by nitrogen, water vapour and other chemicals which makes consequent extraction difficult.

A second technique involves pre-combustion separation. In a plant using natural gas, the fuel is first partially oxidised,producing hydrogen and carbon monoxide. A further reaction then converts the carbon monoxide to dioxide with the production of more hydrogen. This reaction is commonly known as the ‘shift’ reaction. The carbon dioxide is then removed using physical or chemical absorption, and stored before combustion. The hydrogen-rich fuel gas is burned in a combined cycle gas turbine (CCGT) system capable of accommodating high burning velocity hydrogen. Alternatively, it could be used in a fuel cell system. These combinations of technologies promise conversion efficiencies approaching 60% without capture, and 48% with capture, for gas-fired plants.

An extension of the precombustion technique for carbon capture can be applied to a particular type of coal-fired plant – the integrated gasification combined cycle (IGCC) plant. Fitting such IGCC plants with physical absorption technology to capture carbon dioxide at the pre-combustion stage is – in our view – probably the most promising and sustainable technology.

The earliest integrated gasification combined cycle plant was the Cool Water pilot plant, built by the General Electric Company in California, using a Texaco gasifier (see figure 1). The basic IGCC plant can be modified by adding a further shift reaction step that converts the carbon monoxide into carbon dioxide, with the production of more hydrogen downstream of the gasifier. Figure 2 illustrates a plant involving this second type of modification. It also shows a method of recovering the carbon dioxide by absorption at high pressure and recovery by liquefaction with 90% efficiency.

An alternative route for a coal fired plant

A more immediate and straightforward route to CO2 reduction is to retrofit current coal-fired stations by upgrading the boiler and steam turbine plant from subcritical conditions (180 bar, 540C steam) to supercritical (300 bar, 600C final steam). The plant efficiency consequently increases from around 36% to 43.5%, effectively reducing CO2 emissions by 20%. Such a coal-fired ultrasupercritical plant – possibly also with oxygen instead of air for combustion, thus enabling carbon dioxide capture from the flue gas to make it a CSS plant – may emerge as an alternative to IGCC modification.

Once the CO2 has been captured and compressed to liquid form it can be stored in various ways, for example deep saline aquifers, or depleted oil and gas reservoirs. Several storage schemes are already in operation. The three largest examples are: In Salah, Algeria where BP injects CO2 separated from gas back into the gas reservoirs; Sleipner in the North Sea where Statoil injects CO2 separated out from the production of natural gas into a saline aquifer;Weyburn in Saskatchewan where CO2 is injected underground, thus storing carbon dioxide and enhancing oil recovery. In total, these three projects alone are storing about 3 million t/yr of . Vattenfall are exploring a porous sandstone rock formation under the village of Schweinreich, in NE Germany, as a potential store for carbon dioxide captured from the Schwarze Pumpe power plant which burns lignite and bituminous coal in a 30MWt boiler using oxygen and recirculated carbon dioxide.

It is estimated that there are hundreds of years worth of storage capacity in deep saline aquifers, some with capacities of 10,000 Gt available, and around 920 Gt of carbon dioxide could be stored in depleted oil and gas fields. However, public acceptance for underground storage in inhabited areas may prove difficult to obtain because of potential leakage.

In addition to undermining the purpose of a storage project, leakage from an underground reservoir into the atmosphere could have local effects; ground and water displacement, groundwater contamination and biological interactions. In Salah, Sleipner and Weyburn are examples of carefully selected and monitored stores, none of which have experienced any significant leaks.

BP and Scottish and Southern Energy are planning to build the world’s first integrated commercial-scale power plant with CO2 capture and storage. This will be a pioneering 475MW hydrogen power plant at Peterhead in Scotland. The plant will reform natural gas to hydrogen and carbon monoxide, which will then be converted to carbon dioxide. The carbon dioxide will be extracted and the resulting hydrogen will be used as decarbonised fuel in a CCGT power plant.

The carbon dioxide will then be exported through existing pipelines to the mature Miller oil field, 240km offshore, where it will be injected into the gas reservoir 4km below the sea bed to increase oil recovery from the reservoir and for storage. This will result in some 50 million barrels of additional oil, and extend the life of the field by 15 to 20 years. 1.8Mt of carbon dioxide will be captured and stored each year. Initial engineering feasibility studies into the project have already been completed and partners are currently confirming the economic feasibility of the programme. If this is positive then the go-ahead will be given at the end of 2006,with the plant being in operation by 2010.

Several demonstration IGCC/CCS plants are proposed in the US and UK. Progressive Energy proposes a 400–800MW IGCC/CCS plant on the East coast of the UK, capturing around 2–4Mt of CO2 per year. In the US a $1 billion coal-fired plant by FutureGen is on the drawing board. The US government spent about $75 million in 2004 on R&D, while the British government announced in 2005 that £40 million would be spent to support CO2 storage in depleting North Sea oil and gas fields.

The performance of any new or modified plant may be assessed in relation to two objectives – the attainment of good performance (high thermal efficiency and low cost of electricity produced) and the effectiveness of CO2 removal. The two may be coupled if a tax on carbon dioxide is introduced. Norway introduced a tax on CO2 emissions ten years ago, equivalent to 50 dollars per tonne of carbon avoided, which stimulated the Sleipner capture project.

On efficiency, the IGCC/CCS plants have to be compared with good modern gas-fired CCGT plants operating at high turbine entry temperature, with very high overall efficiencies approaching 60%. They cannot match the high efficiency of these CCGTs and, even if they could, additional processes and equipment are required and, therefore, there is increased capital cost.

Both the reduction in net thermal efficiency and the increased capital cost will lead to increased cost of electricity generation. But whether these IGCC/CCS plants will be economic, in comparison with conventional plants of higher efficiency and less capital cost, will be determined by how much society is prepared to pay for CO2 reduction. One way of illustrating this is by assuming that generation plants will have to pay a carbon tax. If it were set at $30/tonne of CO2 produced, then IGCC/CCS plants would be able to compete with a basic IGCC plant without carbon capture.

The use of carbon capture and storage to reduce carbon dioxide emissions from new coal burning power stations is an attractive concept. It means that coal can be put back on the agenda for power generation, and reduce the ‘dash for gas’ which has dominated the power generation scene for the last few years in Western countries. It could also, if adopted, cut carbon dioxide emissions from heavily coal-dependent economies such as India and China.

In the meantime full-scale demonstration plants must be built to prove the technical and economic performance of the proposed new coal-fired power stations. They can then take their place alongside nuclear power stations, renewable technologies and gas to provide a balanced, secure and clean electric power supply. Regional maps of storage potential around the world also need to be developed in coal rich developing countries.

Operation of the new technology to give a product stream which is almost pure hydrogen could also be important, if we decide to move down the hydrogen route to supplant gasoline and diesel as transport fuels. It must be appreciated however, that technology on this scale takes time to mature and to enter the market. The long lead times necessary in energy engineering must be acknowledged in any future energy strategy.

Visit the International Energy Agency at www.ieagreen.org.uk The authors have written an article for The Chemical Engineer:‘Cutting Greenhouse Gas Emissions – A Pragmatic View’, July 2005.

Ian Fells is Emeritus Professor of Energy Conversion at Newcastle University and has been special advisor to several Parliamentary Committees and the European Parliament. He was the founding Chairman of the New and Renewable Energy Centre at Blyth in Northumberland.

Sir John Horlock was the founder and first Director of the Whittle Laboratory at Cambridge University, and is an authority on turbomachinery fluid mechanics and power plant thermodynamics.

Paralympic dinghies that allow sailors of all abilities to compete

Examining the use of living organisms as components within engineering solutions