Responses to ‘Philosophy in the Making’,‘Ethics and the Engineer’and ‘Engineering and the Artist’s Eye’

I was delighted, if a little surprised, to read the article on the philosophy of engineering, ‘Philosophy in the Making’, in Issue 26 of Ingenia. My interest in this subject goes back over thirty years, to my time at Cambridge when I studied Engineering Sciences followed by a year of Moral Sciences (with lectures from Ian Hacking, among others). Curiously, no less than five engineers in my year changed to philosophy that year – a reflection,maybe, of the heady days of the late 1960s.

After an interlude of a few years I returned to the subject when studying for a PhD in what began as the history of engineering design, but ended up being the philosophy of engineering.

My interest is the history of how people designed buildings and this quickly brought me to the question of what it is to be an engineer. If you believe what you often read, buildings are designed by architects, scientists, mathematicians, even inventors, but rarely by engineers. But when you read a little more deeply you find that many people whom modern writers (who are seldom engineers) call architects, scientists and mathematicians were, in fact, engineers, and usually military engineers, from Archimedes to Leonardo and even Michelangelo.

My own thesis is that while the scientists’ currency, that defines both the nature of and nature of progress in science, is the ‘scientific hypothesis’, the engineers’ equivalent is the ‘design procedure’, by which the engineer discharges his or her duty to communicate the engineering designer’s plans to those who will make it real, and provides sufficient confidence in the designs that the various members of the project team are happy to proceed.

I doubt whether the compulsory study of the philosophy of engineering fits well with modern engineering courses. However, I do think it would help university lecturers understand why they teach what they teach, and help them explain with confidence what they mean; for example, by that mercurial concept, the “factor of safety” (whose modern use and meaning we owe to Rankine, and has so little to do with safety). 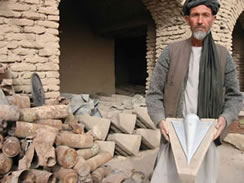 Creative use of technology – a plough blade made from unexploded ordnance. Photograph taken by Zak Johnson whilst working in Afghanistan for Handicap International Belgium (April 2005)

The achievements of modern engineering are substantial and the role of engineering in promoting human wellbeing is indisputable. Nevertheless, there is a growing public distrust of technologists and new technologies. This apparent contradiction needs careful consideration, as highlighted in the article ‘Ethics and the Engineer’ (Ingenia 25).

Consider two significant aspects of engineering. The first was identified by Lord Broers in his 2005 Reith Lectures ‘The Triumph of Technology’ (Ingenia 23). Lord Broers said: “I know that I can safely drink the water that runs out of the tap in the majority of places I visit in the world.” This is true,but the key word here is “tap”. A United Nations Report Water for People, Water for Life, shows that two billion people are affected by water shortages in over forty countries and 1.1 billion people do not have safe drinking water – nor, in most cases, a tap. Consequently, 6,000 people, mostly children under the age of five, die every day from waterrelated diseases. Simple and appropriate technology is available but it is not being applied.

The second is military engineering. The US annual military budget exceeds $500 billion and almost a third of engineers in the US are reported to be employed in military related activities.1 This includes the development of highly sophisticated but indiscriminate weapons such as cluster munitions, which allowed 220,248 submunitions to be fired in the first five minutes of operation Desert Storm in Iraq in 1991.2 Complex but inappropriate technology is being developed and applied.

Initiatives such as The Royal Academy of Engineering’s recent ‘Statement of Ethical Principles’ (Ingenia 25) are very welcome. However, I suggest there are three important requirements if we are to regain the initiative in public debate. Firstly,we need to discuss openly all impacts of engineering on society,both positive and negative. Secondly, we need to move beyond a statement of ethical codes or precepts toward the development of a genuinely aspirational ethical ethos in the engineering profession. Thirdly, every engineer needs to take a more active role in determining how engineering is applied.

1. Jacques S Gansler,‘Integrating civilian and military industry’, Issues in Science and Technology, Summer 2003,www.issues.org/19.4/updated/gansler.html Gansler is a former US Under Secretary of Defense. 2. Statistic quoted by Rae McGrath at the Meeting of Humanitarian Experts, Geneva,November 2004, www.mineaction.org/downloads/Cluster%20Munitions%20-%20R%20McGrath%20paper.doc McGrath is a co-Nobel Peace Prize Laureate (1997) and co-founder of the International Campaign to Ban Landmines.

Do we need more motorways?

Arthur Bourne's article ‘Engineering and the Artist's Eye’ (Ingenia 26) refers to the writings and predictions of HG Wells. Wells is quoted as saying,during a 1936 BBC broadcast about the lack of foresight in society,with reference to the motor car: "Nobody is thinking of the congestion on the roads that the motor car will bring to London." Bourne comments: “How familiar now that we are congestion-charged!”

It would be an injustice to HG Wells to leave the impression that his foresight about motor cars and their use dated from that broadcast. In his book Anticipations of the Reaction of Mechanical and Scientific Progress upon Human Life and Thought, published in 1902,he wrote: "It may be after tough legislative struggles they will secure the power to form private roads of a new sort upon which their vehicles will be free to travel up to the limit of their very highest speed. It is along the lines of such private tracks and roads that the forces of change will certainly tend to travel and along which I am absolutely convinced they will travel. The segregation of motor traffic is probably a matter that may begin even in the present decade."

He went on to anticipate that the roads "will be very wide with strict separation of the traffics in each direction and none of the complicated and fussy regulations currently applied to transport. They will be constructed of new superior materials sloped to drain and traversed by soft tyred conveyances and be clean. Through the varied countryside the new roads will run,here cutting through crest, and there running like some colossal aqueduct across a valley, swarming always with multitudinous traffic of bright swift and not necessarily ugly mechanisms. Everywhere amidst the fields and trees linking wires will stretch from pole to pole for communication. There will be service areas in place of coaching inns."

In 1903,Car magazine stated: "The Motorway is bound to come." The vision was spelt out but ignored! Proposals to build motorways in England in the 1920s and early 30s were rejected. The Germans commenced their programme of autobahns in 1933 and after a visit to Germany in 1936, British Highway Engineers proposed that a motorway network of 2,800 miles was needed in Britain.

The construction of such a network at last commenced in 1955 by which time 29% of families had cars and there were 8.5 million vehicles on the roads. Congestion was rampant at busy rush hours and on holiday routes.

There is now a motorway network of only 2,050 miles, significantly less than British Highway Engineers originally proposed in 1936. Congestion is worsening, and the consequences are costly, wasteful,polluting and dangerously frustrating.

During the motorway era the construction industry had demonstrable capacity to provide roads to meet the country's requirements, and taxation on road users has produced far more than needed to pay for a good network. The Lofthouse Committee's report in 1966, prepared by representative experts, recommended the best and most economical procedures to operate such a construction programme,but these recommendations were not implemented.

Congestion charging will not resolve the congestion problems, but it will increase the costs of road travel and of the movement of foods and other materials. HG Wells foresaw the need for a good free-flowing network of roads over a century ago so, even now, why cannot we?

The engineering behind the new Diamond Synchrotron science facility in Oxfordshire

Examining the use of living organisms as components within engineering solutions