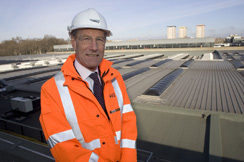 John Armitt on Euston station roof whilst undertaking a site visit to look at the development opportunities of the station, 2006 © Network Rail

Bridges, airports, hospitals, tunnels, power stations – John Armitt has built them all. Now Chief Executive of Network Rail, he explains to Michael Kenward how he is helping to put Britain’s railways, and its engineering, back on track.

Few teenagers today would look at a leaflet showing someone standing in a field during a thunderstorm, gazing through a theodolite and say “That’s what I want to do.” Perhaps it was an odd response even in the 1960s, but it was just such a flyer, from the Institution of Civil Engineers (ICE), that beckoned John Armitt into a life of waterproofs, Wellington boots and hard hat. He can even remember the strapline on the leaflet: “Harnessing the resources of nature for the benefit of mankind”. “That struck a chord and appealed to me,” he explains. He just fancied the idea of travelling and working outdoors.

These days, John is more likely to exercise his waterproofs in the pursuit of fish. One of his pastimes is fly fishing – he belongs to a syndicate that fishes a small lake near Alcester, half an hour’s drive from home. John also likes to get out of the office to see what is happening on the tracks. He confesses that, when he gets home, his partner knows from his cheerful demeanour that he has spent the day out and about, rather than grappling with the ‘indoor’ aspects of Network Rail, where he has been Chief Executive since October 2002. Before that, after many other roles on the contractor side of civil engineering, he was appointed CEO of Railtrack a few months after it was put into administration.

Unlike some previous heads of the UK’s railway operations, John has a real engineering background. He even spent the early part of his career hammering pegs into the ground so that site workers could move in and pour their concrete. This part of his career began after what today seems like an unconventional education. No engineering degree here, nor a set of A levels. But these were the 1960s and less than 10% of school leavers went off to university.

For John, and here is one thing he did share with teenagers today, school was boring. “I had a load of O levels, but I was cheesed off with school.” Fired by that leaflet, he enrolled at Portsmouth College of Technology to study for a diploma in Civil Engineering, a qualification that not only let you in with four O levels but also meant exemption from the ICE’s exams.

Why civil engineering? “Electrical and mechanical were not my cup of tea.” Too much like hard science? “I took as much pleasure, if not more, from history, English literature and subjects like that than from maths and physics.”

On the job training

These two subjects continued to be an issue for John. He failed his exams in them after the first year at college. Then, guided by a “kindly head of department,” he found a job with a contractor. The year out, with one day a week at college, not only completed those tricky maths and physics exams, but gave John invaluable site experience and a chance to find out what life was really like at the sharp end of a theodolite. It also made him an attractive proposition to employers. Still only 20 when he qualified, John joined John Laing which, like all contractors then, had a graduate training scheme to take employees through to chartered status.

As John points out, his degree-free ascent into the upper echelons of engineering may seem surprising today, but he reels off a list of contemporaneous engineering high flyers with similar histories. You might still manage to break into the field in civil engineering with an odd set of A levels, John says, but agrees that it might be harder today. Then again, architecture might be an option, and one that he might have taken himself. “I have always had an empathy for design, particularly architecture.”

This may explain why the one record in his office of his own myriad past projects is a picture of the second Severn River crossing. Prior to that project he also worked on power stations (nuclear and oil), nuclear reprocessing plants, hospitals, airports, petrochemical plants, the Channel Tunnel Rail Link, and construction of the Falklands Airport after the South Atlantic Campaign – “which was great fun”. All in all, infrastructure around the world worth billions of pounds.

A talent for business

John has been credited with rescuing at least one major construction business from extinction. He has an eye for finance, and swapped the crunching of engineering numbers for that of financial ones relatively early on in his career. “By the time I was about 27 I had put my slide rule back in its pouch and essentially I had become a manager. I have been managing ever since.” But it has been management in the cause of engineering. “We don't exist without engineering. It underpins our ability to live a civilised life. The great satisfaction that you get from engineering is that you know you are making a contribution in a meaningful way.” Though John is not interested in engineering for its own sake. “The railway is there for people to travel on. It is no good having splendid engineering if we are doing it in a way that the public cannot take advantage of, or can’t afford to take advantage of.”

The challenge for Network Rail is to rescue Britain’s railways from many years of lack of investment. At no time in the history of Britain’s railways, John explains, has it ever got out of fire-fighting mode. One consequence of this is that there are holes in Network Rail’s knowledge of what it has and where. That made it hard to move from merely finding and fixing the faults into preventative maintenance. “If you can get into a regime where you are planning and preventing, then you start to build up, as we are beginning to, an enormous database.”

Here John mentions the high speed measurement trains that run around the primary network every two weeks. These record an enormous amount of data about every foot of the railway. Network Rail is spending around £100 million a year on information technology to “crunch” that data, among other tasks, and turn it into real information that can feed decision making.

Data is just the start. You have to be able to use it more effectively. New approaches to ripping out and replacing tracks, really could mean that the UK finally has a railway system that is fit for the 21st century. It will take something smart to keep up with the rapid growth in rail travel in the UK – 40% in the past decade, another 30% likely in the next 10 years. “The demand for extra capacity and for the capacity that is there to be utilised to the maximum, is going to be a real challenge for us,” says John. “We have got to find smarter ways of doing things, such as halving the time we take to change our switches and crossing.”

The investment numbers are impressive, more than matching the cost of many of the other projects that John has managed. “In the next three years we will spend £7.2 billion across the network on renewals, compared with about £5 billion over the last three years.” At any one time, Network Rail will have 5,000 active projects with values ranging from £100,000 to £1 billion or more.

The company is already making that money go further. “We have taken £350 million out of our basic costs over the past three years and we will get out another £300 million over the next three years,” says John.

Unfortunately, Network Rail faces one challenge that does not affect most other major projects. “What makes rail work undoubtedly expensive,” John explains,“is that we are always trying to keep the railway running while work takes place. We finish up working in short sessions either in the night or at weekends.” Over the past two years,‘blockades’– banishing trains to their sidings for longer periods – have helped to bring down costs by 40%. “We just turn the railway into a greenfield site for four weeks!” John jokes.

John insists that the industry has to constantly challenge itself. You have to offer society the choice that it ought to have in modes of travel. Airlines and cars have become cheaper and more fuel efficient,with more features. “European railways have become more comfortable, air conditioned,with more functional trains, but they use a lot more power. The Japanese run trains that are half the weight per passenger carried. You have to ask why,” says John. Are they any less safe? Do we need to review our own safety standards? Is the constant pressure for ever higher safety, regardless of the cost, and the safety standards of other modes of transport, really what people want?

You can see all sort of opportunities for engineering on the railways, says John. “There is a continuous spectrum of challenges going forward.” Are the challenges very different from his time spent building other things? Most of the money at Network Rail still goes into putting things into the ground. But John is now the client rather than a contractor spending someone else’s cash.

That helps, he believes. “I understand what contractors want and how they think.” As a client you also see the bigger picture, even though it takes a lot longer to see the results.

There is still time for him to see some of that work come to fruition. With an official retirement age of 65, John still has five years before he can fit more fly fishing into his busy schedule.

Rapid as progress has been in the past five years, even John Armitt has to admit that it could take longer than five years to persuade the media, and politicians, that, for all its fundamental importance to the UK, the railway is up there with the National Health Service and education as an institution whose existence you cannot really question. But does he believe that they are getting there?

“We have got a fantastic team here,”he says. “I have been able to play a part with that team in securing a much more stable environment in the railway in the past three years. It is no longer a big political issue. That in itself is a success. What we now want to do as a management team is make the company world class and to be absolutely engaged in the debate about what happens next for the railways as one of the key transport modes in the country.”

Michael Kenward has been a freelance writer for the past 15 years and is currently a member of the Ingenia Editorial Board. Prior to this he worked on the New Scientist for 20 years and was editor of the magazine in the 1980s.

Paralympic dinghies that allow sailors of all abilities to compete

The engineering behind the new Diamond Synchrotron science facility in Oxfordshire