Aero-Engines of the Future 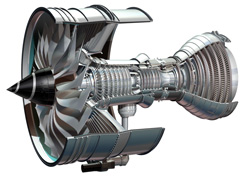 Meeting the environmental challenge of noise and engine emissions

Aviation is under increasing pressure to reduce its environmental impact in terms of both noise and engine emissions. The research and development organisations of many aerospace companies are working together in order to meet these technical challenges. Ric Parker FREng of Rolls-Royce plc outlines the progress made so far.

A series of demanding environmental goals were set by the Advisory Council for Aeronautics Research in Europe (ACARE) in September 2001, in its 2020 Strategic Research Agenda for the aviation industry. The underwriting of these targets gave impetus to the industry, encouraging it to push its R&D efforts further and faster than before.

Among the targets set by ACARE were a 50% reduction in fuel consumption and carbon dioxide (CO2) emissions, a 50% reduction in perceived external noise levels, and an 80% decrease in emissions of oxides of nitrogen (NOx). ACARE noted that the industry should find ways of minimising impact on the environment during manufacture, maintenance, overhaul, repair and disposal of aircraft and engines.

Rolls-Royce, with Airbus, Snecma and other related companies, is involved in a number of collaborative ventures, both in Europe and the USA, in order to achieve these objectives. In addition, Rolls-Royce is carrying out its own internal research with a view to meeting the 2020 targets.

The main environmental issues that concern the aviation industry are noise, local air quality and climate effects. Noise can be tackled at the source, ie the engine and the aircraft. There are administrative strategies, such as land management and operational procedures, that can also be effective in reducing the impact of the noise that is generated by the aircraft.

The local air quality is affected by oxides of nitrogen, smoke, unburnt hydrocarbons, carbon monoxide and particulates. These problems can be mitigated mainly through engine improvements, although there remain some fundamental conflicts in minimising NOx, fuel-burn and noise simultaneously. Operational strategies can reduce the impact on the environment, such as how long the aircraft waits before take-off, route, angle of descent and access to landing slots.

Aviation contributes to climate change by engine emissions. The effects of water vapour, CO2 and NOx generated by engines at ground level have the same results as when these gases are emitted by any source. But when NOx gases are emitted at high altitude they form ozone and reduce the methane level.

In addition, if atmospheric conditions are appropriate, vapour trails are formed whenthe aircraft is flying, which reflect sunlight. Cirrus clouds can also be triggered by emission of particulates. New aero-engine technologies can help in creating a more sustainable future for aviation.

The most efficient way to reduce aircraft engine emissions is to reduce fuel consumption. This is particularly true for emissions of CO2, which are directly proportional to fuel burn – each kilogram of fuel burnt produces over 3 kilograms of CO2, assuming that kerosene remains the standard fuel for aviation use. Since 1950 fuel usage has fallen by 70% (see figure 1), and air travel currently represents only 3% of global CO2 emissions. A typical figure for fuel burn of today’s modern aircraft is 0.035 litres per passenger per km (81 miles per gallon per passenger).

To achieve the full 50% reduction in fuel burn from 2000 levels demanded by ACARE, 20% will be reduced from the engines and 20% from more integrated aircraft design (see figure 2). The remainder will be found from air traffic management and operations improvements, which will enable the aircraft to travel more directly to its destination and land immediately, achieving significant fuel savings.

In a turbofan most of the air bypasses the core and generates thrust using energy from the core to drive the fan. This improves the propulsive efficiency, thus improving fuel consumption and also reducing noise. However, as the bypass ratio is increased so the engine becomes larger and heavier, requiring more power from the engine to fly the aircraft. With today’s technologies, the point at which the increase in weight of the engine begins to overtake the propulsive efficiency benefits is at a bypass ratio of about 10. Future aircraft with lightweight systems will move to a bypass ratio of 12 and beyond.

A major Research and Technology (R&T) effort, partly supported by the EU collaborative research programme VITAL, is now running to enable the optimum bypass ratio to be increased up to 15 by reducing the weight of the fan system whilst still operating effectively and safely. Even now fan blades must function under highly stressful conditions. Typically they can be nearly three metres in diameter – in the Trent engine for example – and the tip speed can be over 1600km/hr.

Improvements in thermal efficiency are generally achieved by reducing aerodynamic losses in the turbomachinery, and increasing pressures and temperatures in the core of the engine. However, NOx emissions increase with pressure and temperature, hence improved combustion technology is needed to keep NOx discharge to a minimum.

The core of a gas turbine is an extremely demanding environment. Critical technologies include those which minimise the need for cooling air (which itself may be over 600°C) by improved cooling configurations for the blades, improved materials and thermal barrier coatings. These result in a turbine blade configuration which is highly complex, involving advanced manufacturing processes.

Each blade will extract the equivalent power from the gas as a Formula 1 racing car, yet last thousands of hours of operations in gas stream temperatures that can exceed 1700°C (400°C beyond the melting point of the raw material), with centripetal loads equivalent to the weight of a double-decker bus.

At the forefront of research in these areas is the recently completed ANTLE, (Advanced Near-Term Low Emissions) project, led by Rolls-Royce and supported by the EU, UK DTI and Spanish government. Rolls-Royce has developed a test-bed engine with fewer stages of blading and fewer blades per stage in both the compressor and turbine, resulting in a reduction in parts count, complexity,weight and cost. Advanced aerodynamic rig testing on compressor and turbines has improved the understanding of how to achieve parts count reduction without losing efficiency.

A new, lean-burn, staged combustor has been developed, which performs well, demonstrating a NOx reduction of 62% relative to the ACARE baseline, with potential for greater reduction and further optimisation of the technology.

Overall aircraft system efficiency can also be improved indirectly by minimising the power requirement from non-propulsive systems. Peak demands occur, for example, during landing and take-off when manipulating flaps, actuating doors and operating landing gear. Optimisation of these demands is being directed under the POA (Power Optimised Aircraft) programme, led by Liebherr.

Rolls-Royce, as a partner, is demonstrating the engine technologies to support this work, including embedded electric motors and generators, as well as electrically powered fuel, oil and actuation systems.

Also running over a number of years, SILENCE(R), as its name suggests, is a noise technology demonstration programme. This has showcased technologies such as a low noise fan and outlet guide vane assembly, low noise turbine and optimized acoustic liners. This EU research project, involving more than 50 organisations,will conclude during 2006.

SILENCE(R) has also employed a negatively scarfed intake, designed to deflect fan noise upwards away from the ground and the general public. Various phases of testing have been undertaken to validate these technologies – in rigs or in a full engine mounted on a specialist exterior noise stand at the company’s Hucknall facility – and some in the ANTLE vehicle or in flight.

The travelling public expects to fly to ever more destinations – on business and for pleasure – but also demands a greener world. It is a difficult equation that the aviation industry in particular must balance. By continuing the collaborative approach that Rolls-Royce and other bodies have been following, a combination of further technology improvements, operational efficiency and emissions trading should be able to achieve a sustainable aviation industry.

Richard (Ric) Parker was appointed Director of Research and Technology at Rolls-Royce Group in 2001. He was recently appointed Visiting Professor in Aerospace and Transport at Loughborough University and is based in Derby. He is responsible for direction and co-ordination of R&T programmes across all the Rolls-Royce businesses. Ric joined Rolls-Royce in 1978, and has held various posts including Chief of Composites and Ceramics, Chief of Compressor Engineering,Managing Director – Compressor Systems, and Director of Engineering and Technology, Civil Aerospace. Ric was elected a Fellow of The Royal Academy of Engineering in 2004.

The findings of the post-Katrina investigation