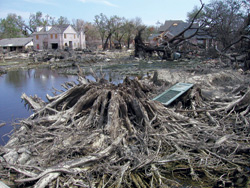 In the days and months following Hurricane Katrina, the press covered in great detail the impact of the disaster on the city of New Orleans. At the time there were many theories as to why the city was flooded so catastrophically. The scientific investigations instigated by the Federal government and independent groups have taken time to complete and the scientific story behind what really happened is only now coming to light. Ingenia’s Editor-in-Chief,Dr Scott Steedman FREng,writes about the post-hurricane investigations led by the US Army Corps of Engineers.

A few days old, Hurricane Katrina crossed Florida on the 26 August 2005. As it emerged into the Gulf of Mexico, it quickly strengthened to a Category 2 hurricane. Over the next two days Katrina strengthened to Category 5, the highest intensity on the Safir-Simpson scale, with sustained wind speeds over 135 knots. Katrina was a very large storm and, even though its wind speeds fell just before making landfall, the surge of water that struck the coast was among the largest ever recorded in the Gulf.

Shortly after creating Hope and Guardian, the Federal government created two further teams: an Interagency Performance Evaluation Taskforce (IPET) to ‘find the facts’ behind the inundation of the city and a Future Planning Study. Under the Project Director,Dr Lewis E (Ed) Link of the Department of Civil and Environmental Engineering in the University of Maryland, the IPET investigation was divided into several tasks covering the meteorology, the surge, the pumps etc.

My role was to lead, with Dr Michael Sharp, Technical Director for Civil Works Infrastructure at the US Army Engineer Research and Development Center, one of the IPET tasks, supporting the Geotechnical Structure Performance Analysis. Our brief was to study the levees – to gather and analyse the evidence and to learn the lessons for the future.

One of the IPET tasks was concerned directly with gathering information on the socio-economic effects. They reported that in metropolitan New Orleans alone, the direct economic cost of the disaster was $21Bn in the five counties (parishes) that make up the city, with an additional $7Bn of damage to public structures and infrastructure. They reported 714 deaths, 70% of whom were over 70 years old.

The challenge for both the IPET investigation and for Task Force Guardian was substantial. Statistics published by Guardian state that of the 284 miles of Federal levees and floodwalls surrounding the city and 71 major pumping stations, 169 miles of levee and 34 pumping stations were damaged by the storm. Very little instrumental data could be recovered from wind or wave gauges as they were almost completely destroyed, but the collection of witness statements, surveys of high tide marks and other physical investigations were quickly set in motion to gather information. From this base, the IPET task teams worked to develop an overall picture of the disaster.

The city of New Orleans

New Orleans was founded in 1718. It now comprises a metropolitan area spread over five counties or ‘parishes’, with the centre of the city (Orleans Parish) located on the east bank of the Mississippi River, where built up areas extend northwards to Lake Pontchartrain.

The Parish of St Bernard lies to the east of the city centre, across the Inner Harbor Navigation Canal (IHNC). To the north east lies the Parish of Orleans East. The IHNC connects the river and the lake with the Mississippi River Gulf Outlet Canal (MRGO) which provides a direct route to the sea. To the west of the city centre lies Jefferson Parish.

From its origins on the bank of the Mississippi River, New Orleans grew into a major city and port. Drainage of the low-lying land, by pumping, encouraged development further away from the centre which, in turn, became protected by a ring of levees and flood walls.

Canals and drainage channels criss-cross the city. Large pumping stations maintain the ground water level below the ground surface, even though the entire area (with the exception of a narrow strip of land along the side of the river) is below sea level, in some areas by several metres.

This was by no means the first time that the city had been flooded, but it was certainly the worst. In the past 60 years alone, hurricanes struck New Orleans in 1947, 1956 and 1965 (Hurricane Betsy). Over the past four decades Army Engineers have prepared detailed reports into the vulnerability of the area.

A major report from the Department of the Army in 1964 contained their assessment of the critical paths of approach for a future hurricane to affect the city. Their selected path to the east of the city was very similar to the actual path taken by Hurricane Katrina, as it tracked northwards during the early morning of 29 August 2005.

The IPET teams studying the storm track and the hydrodynamics developed complex computer simulations of the sea state as the hurricane passed. They reported ‘unparalleled wave and storm surge conditions for the New Orleans vicinity’. Their simulations show graphically the passage of the storm surge from south west to north east, finally striking the coast of Mississippi near Biloxi.

Strong winds hit the city and heavy rain, over 300mm in parts, and rising waters led to the massive inundation observed over tens of square kilometres of residential and commercial areas. The IPET investigation found that there were 50 breaches in total in the levee system. Four of these, associated with failures in the foundations of the levees, occurred prior to the water reaching the top or crest of the flood wall. The rest occurred as a result of water cascading over the top, called ‘overtopping’, causing scour, erosion and loss of crest.

Seawater entered the city centre through these breaches and then moved through the city along the canals and drainage system, filling the deepest low-lying areas to depths of over 3 metres within hours. Pumping stations in the centre that had remained operational were overwhelmed, and water then entered through these pumps as well.

The investigation first concentrated on the breaches that occurred prior to overtopping, when the water level had still not reached the crest. All of these cases had flood walls constructed through the old levee section, a technique used to raise the height of the protection without having to widen the levee itself.

The levees were built originally from local soil, built up in layers with a slope on either side. The oldest parts of the levees in the centre of the city date back to the original construction of the outfall canals, over 100 years ago, when pumps were installed to drain the swampy land between the old centre of the city and Lake Pontchartrain, to the north. These old levees had very soft foundations, comprising a top layer immediately below the ground surface of a mixture of peat and clay known as ‘swampy marsh’ and a lower layer of either soft clay or sand. Below this was more clay and sand, extending to great depth – there is no natural rock anywhere in the Mississippi delta. Borings confirmed that the levee overlay clay at the location of the 17th Street breach, whereas the levee overlay sand at the locations of both the London Avenue breaches.

The IPET investigation undertook a series of model studies, using physical modelling in a geotechnical centrifuge, sophisticated computer model simulations and slope stability analyses to identify the most likely mechanism of failure.

Using a centrifuge subjects the model to a steady, increased acceleration field, which creates self-weight stresses within the model levee and its foundation that are the same as the stresses in the full-scale condition in the field. The centrifuge models showed that the rising water in the canal could push the floodwall landwards enough to create a water-filled gap down the front of the wall, effectively cutting the levee in half.

In the case of the London Avenue breaches, the IPET study concluded that the leaning movement of the flood wall allowed the water from the canal to reach the underlying sand layer, greatly increasing the water pressures in the foundation and effectively ‘floating’ away the landward half of the levee.

These findings confirmed the computer modelling, which showed that the same gap mechanism was critical to the stability of the wall-levee system. The study found that the case of a water-filled gap in front of the floodwall was not considered in the original design. This mechanism worked in conjunction with the weather conditions and was identified in IPET's Draft Final Report as the most likely initiator of difficulties with the levee foundations.

The IPET study also concluded that all of the other levee breaches, many of them several hundreds of metres in length, commenced with overtopping, causing scour and erosion on the landward side of the levee, which ultimately led to loss of support and breaching. Wherever water flow was more concentrated, such as around the end of a section of wall, perhaps part of a pump station or flood gate, local scour was also found to be severe.

These mechanisms alone do not explain the number of breaches and the scale of the inundation, particularly in the centre of the city. IPET found that water levels there were typically 3–4 metres above sea level but there was little wave action and design levels of the protection system were comparable to, or higher than, the height of the surge. Within months of starting the investigation, the IPET geodetic survey team discovered that large parts of the levee system were in fact lower than was originally thought, and by a considerable margin.

Two explanations for this have been put forward. The IPET team re-surveyed all the official benchmarks in the area to check their elevation against historic records. Their first finding was that many of these were not at their anticipated elevation, largely due to subsidence within the soft clays beneath large areas of the city.

The IPET investigation found that Hurricane Katrina would have caused widespread flooding even if the levees had held, but the vulnerability of the system, which IPET concluded was ‘a system in name only’, contributed greatly to the scale of the disaster. The study has provided a template for other flood-susceptible areas around the world to examine the integrity of their own protection systems. They would be wise to take note: they may be next.

The IPET investigation has published many other findings in addition to the levee performance, relating to the storm, the surge and waves, pump stations, construction techniques and the socioeconomic costs of the disaster. The IPET Draft Final Report was posted on the internet on 1 June, to coincide with the official start of the 2006 hurricane season. Comments are now being collated, and a final version is expected to be published towards the end of the year. Visit https://ipet.wes.army.mil

Scott Steedman is a consultant civil engineer. Formerly a Fellow and lecturer at Cambridge University, he joined LAWGIBB (now Jacobs Babtie) in 1993, where he became Director of Engineering. He moved to Whitbybird in 2000 as Director of Civil Engineering. Now independent, he specialises in risk and disasters, forensic investigation, urban engineering and research. Scott is a Vice President of the Institution of Civil Engineers and a Vice President of The Royal Academy of Engineering.

A species of robot that can reach difficult-to-access nuclear reactors, aircraft wings and parts of the human body