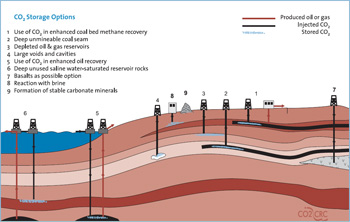 The article ‘Carbon Capture and Storage’ (Ingenia 27)raises some very important issues and questions. One of the most serious is that, if we are to really attack the issue of global climate change,we have to address the fact that fossil fuels will continue to be used worldwide, and find ways of doing this cleanly – and at scale.

It is pleasing to see, at last, an increasing awareness and acceptance within the political arena that this is the case, and that ‘clean fossil fuel’ (especially for power generation) is receiving the attention it deserves. The recently published IEA Report on Energy Technology Perspectives 2006 identifies several key actions necessary to get the world onto a sustainable energy pathway, including: “to accelerate the introduction of CCS, at least 10 fullscale integrated coal fired plants with CCS are needed by 2015 for demonstration”. It is really a question of how this can be done; another important point raised by the authors of the article.

At present there is little incentive for generator companies to invest in such plants. Not only does the introduction of capture have a detrimental impact on the performance and efficiency of a plant, it increases cost and could well have an impact on reliability as overall systems become more complex. So unless there is a fiscal and environmental structure that encourages the necessary investment, the technology is unlikely to be adopted widely. However it is clear that companies – big generators and oil/gas majors – are positioning themselves for the future and the deployment of CCS.

We are now seeing a dramatic increase in the number of potential commercial size projects worldwide. The value of carbon will be a critical element in how most of these projects proceed, especially those in Europe where the acceptance of CCS as a appropriate technology for the European Emissions Trading Scheme will be vital.

Over the last two years, through the DTI, the UK has developed a Carbon Abatement Technology strategy for fossil fuels, which was announced in June 2005 by Energy Minister Malcolm Wicks. This is a fine strategy, referenced in the 2006 Energy Review. It addresses all the key issues from R&D, technology development, demonstration and deployment, and covers technical and nontechnical issues such as public awareness and legal, regulation and CO2 protocol matters. Now is the time to implement this strategy.

Other countries in Europe, most notably Germany and Norway, have addressed the same issue and are coming up with similar strategies. If we can make the UK an attractive place for demonstration and subsequent deployment through the appropriate mechanisms, then it will be possible to establish some demonstrations and ‘first of a kind’ plants here. This will not only benefit UK industry and its technology base, but will also help us meet the environmental targets.

Decisions that we take in the next few years on the type of power plant to be adopted will be with us for at least 40 years. The deployment of CCS is therefore an urgent issue. It is a ‘big’ technology that has the potential to make a significant difference and impact if widely applied.

Fossil fuels supply over 90% of UK primary energy and are the source of virtually all our CO2 emissions. Carbon capture and storage (CCS) could, in principle, be applied to all this fossil utilisation. Professor Ian Fells and Sir John Horlock (‘Carbon Capture and Storage’, Ingenia 27) have given an excellent introduction to the likely initial stages of CCS development in the UK, in which relatively well-established chemical industry technology for hydrogen production, from natural gas or coal, is used to make ‘decarbonised fuel’ for adapted gas turbine combined cycle plants.

The first such plants could be in service by 2010 or soon after. An early start for CCS in the UK would contribute to energy security by extending North Sea hydrocarbon production through enhanced oil recovery, as well as giving confidence in continued large-scale use of coal for power production.

As Fells and Horlock warn, there are long lead times in energy engineering, so it is important to consider some of the new power plant technologies that might be developed specifically for CCS. One of these is low-cost postcombustion capture equipment. Capture plants with the latest semi-commercial postcombustion amine technology have been predicted to give good power plant efficiencies with CO2 capture for both coal and gas, but electricity costs, particularly for coal, are currently estimated to be higher.

Historically though, this type of equipment has been deployed only on a small scale, for relatively high-value CO2 production – for carbonated drinks for example. With new market drivers for CCS, improved construction methods and advanced solvents may see this approach catching up on the petrochemical-based gasification-plus-shift route.

Post-combustion capture might be particularly important if CCS is to be retrofitted to existing plants, to give a much faster rate of reduction than would be possible with new build alone. In the interim, before capture becomes the norm for new plants, it is important that new plants are designed to be 'capture-ready'. This requires a few simple and inexpensive changes, principally space in the right places and access to sequestration sites, to allow capture to be implemented later without unnecessary expenditure.

Decarbonised energy vectors will have to replace carbonbased energy vectors, natural gas and liquid fuels, in the building and transport sectors, to give significant reductions in total CO2 emissions. The extent to which end-users move towards hydrogen, for fuel cells in vehicles and buildings, or electricity, for plug-in hybrids and heat pumps, will obviously have a big effect on the type of power, or polygeneration, plants with CCS that might be built in the longer term.

Finally, processing biomass with CCS actually removes CO2 from the atmosphere, as well as releasing the stored solar energy. It could be implemented quite soon, especially through cocombustion or co-gasification of biomass with fossil fuels to give the necessary scale of operation for economies of scale in CCS.

Copies of the IEA GHG reports, which assess and compare CCS technology options, are available to applicants from the UK and other member countries. See www.ieagreen.org.uk

Aero-Engines of the Future

The findings of the post-Katrina investigation

A species of robot that can reach difficult-to-access nuclear reactors, aircraft wings and parts of the human body