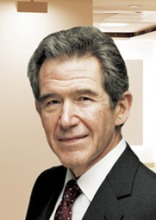 I was delighted to be elected President of The Royal Academy of Engineering in 2006. One reason is I now have the chance to take up a cause I have felt strongly about all my life – putting engineers,and engineering at the very centre of society. Looking at the record of my predecessors, they all had ambitions for their Presidencies, and this is mine. Changing the perception of engineering, by emphasising its relevance to modern concerns and encouraging more young people to enter the profession. This will be a challenge, but I am very much looking forward to it.

I have had a very full life in business with limited opportunity to play a significant part in the Academy’s activities. Yet, there came a point when I realised that it was time to show my gratitude, in a practical way, to the profession that has been the foundation of my career. Indeed, without engineering there would be no oil and gas industry and none of the benefits to the economy and to society which have flowed for 100 years or more.

I also came to realise, as I engaged with other areas of business life, that ‘the engineering approach’ to doing things has gradually and subtly woven itself, almost unnoticed, into people’s lives. The everyday problems that the world presents are rarely simple and solutions often have to cope with uncertainty and risk. But an engineer relishes these things.

To manage these challenges, engineers have developed their own method of dealing with complex systems. This positions the engineer midway between the world of science, with its scientific method, and the world of business, which can deploy the resources we need. It is a vantage point which most engineers take for granted. Yet it is rare to find similar competence and awareness in other disciplines. This is why engineers are so often sought by the financial world and other sectors of business, and why the engineering systems approach to dealing with life’s problems has come to suffuse society.

One issue with engineering is that it is often the job of engineers to make their achievements invisible. But who thanks the engineers who made it possible, for example, for air travel to proceed with such remarkable technical reliability? Unlike the medical doctor, the successful engineer is a professional whose personal achievement is often out of sight.

I want to move awareness of engineering from the periphery of society, where I believe it now is, towards the centre, where it deserves to be. This is not just because I want to make engineers feel better about themselves, but also because I want to create the circumstances in which more of our most creative and able young people will be inspired by how vital and relevant engineering is to solving many of the great challenges of our time.

I believe that relevance and the demonstration that engineering is about progress and serving human needs is the key to this mission, which is why I have chosen to focus, during my Presidency, on three areas in which engineering has a major contribution to make in modern life.

First is Climate Change and Energy. These are unavoidable, interrelated issues of the 21st Century. Scientists have played a major role, and will continue to do so, in developing understanding of the nature of climate change. Economists, such as Sir Nicholas Stern in his report to the British Government last year, have demonstrated the possible costs of doing nothing in response. The challenge now falls to engineers to engage in the debate. For only engineers have the skills and means to do something practical about climate change, whether in mitigation of the effects or in adapting to them. Closely related to this is the complexity of energy provision for future generations – a matter with no easy answers.

Second is Poverty Reduction. The G8 summit on Africa was valuable in drawing attention to a tremendously important issue. However, the problems have not gone away. In Africa and in other developing countries, capacity building – enabling local communities to look after themselves – is as much about appropriate engineering as anything else. Those who listened to the recent Hinton lecture by Professor Calestous Juma FRS (covered in the last issue of Ingenia) will have noted that the International Development community is only now beginning to appreciate how much Africa can benefit from engineering skills. So, now is the time for us to play our part in showing what engineers can do to help alleviate world poverty.

Third on my list, in no order of priority, is Health and Wellbeing. This affects us all, whoever, or wherever we are. Yet how many appreciate the contribution that engineering makes, whether through enabling healthcare – in areas such as imaging, joint replacements, medical devices, to name but a few – or in creating a built environment that is attractive, healthy and secure to live in? I believe Engineering our Quality of Life will have real meaning to those outside the profession.

These three issues, together with Education which underpins them all, are the priority areas that I have chosen for my term of office.

How then to proceed? I have always found that partnership with others is the best way to achieve common goals. Who better to seek as partners than the many member Institutions which comprise the engineering profession in the UK? And what better time to seek to act in unity? In December 2006, I met with the Presidents and the Chief Executives of the leading engineering institutions. We agreed that we should work together on the priority areas that I have described, starting with Climate Change and Energy. Now is the time for the Academy to take a lead in showing how engineering can make a better world.

The technology behind a new NATO submarine rescue vehicle