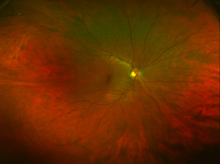 “Beginning with a brilliant innovatory concept, Optos has developed a revolutionary diagnostic instrument” said Dr Robin Paul FREng, Chair of the MacRobert Award panel when presenting the company with the 2006 Award. Optos has rapidly become a leading medical technology company and their scanners have taken nearly 10 million retinal images worldwide. There is even a display at the Science Museum featuring the Optos development. Alastair Atkinson, of the award winning team, describes the personal tragedy that was the trigger for the creation of Optos.

Imagine this – one day your five year old son starts complaining that there is something wrong with his eye. He can’t see properly, but can’t articulate any more details of the symptoms. The consulting ophthalmologist uses a direct ophthalmoscope to look through the boy’s pupil in order to diagnose the problem. Nothing untoward can be seen, but the symptoms persist.

The next suggestion is for a general anaesthetic that will allow your son to undergo a procedure called ‘sceleral depression.’ Here, a blunt instrument is used to depress the white of the eye so that more of the inside of the eye can be brought into view through the pupil. Still nothing is found. Four general anaesthetics later, four sceleral depressions later and your understanding of your son’s medical complaint is no more advanced. Your son then loses his sight in that eye completely.

This was the experience of Douglas Anderson, the Scottish founder of Optos, and his son Leif who was suffering from a retinal detachment. The retina is the very delicate membrane that lines the inside of the eye and is responsible for converting photons into electrical impulses, which in turn are gathered by the optic nerve and transmitted to the brain.

The retina can become detached from the inside of the eye, sometimes spontaneously, more often after a sharp physical blow to the head, but always peeling away from the peripheral area first. Since the periphery of the retina is the hardest to observe directly through the pupil, accurate diagnosis becomes a challenge. Douglas recognised both the challenge and the opportunity of improving the capability of physicians to observe the retina. He approached investors to help him investigate different technological approaches to solve the problem and eventually set up Optos plc as a trading company.

Retinal images can reveal not just signs of a retinal detachment, but also a great number of both eye and general body health issues. It is, after all, the only place in the body where a microscopic inspection of the health of the vascular system can be undertaken without an invasive procedure. Tiny traces of cholesterol accumulating in retinal vessels are known to be a precursor to a stroke – the relative size of the retinal arteries and veins can indicate cardio-vascular disease – while the presence of an artefact called CHRPE in the eye has been linked to bowel cancer. It stands to reason therefore, that the greater the area of the retina that can be easily observed, the higher the standard of healthcare that can be delivered.

Most conventional methods of imaging the inside of the eye, rely on white light that is shone onto the retina through the pupil so that the reflected light might be observed. There are two key restrictions to the approach. Firstly, white light is easily dissipated by opacities in the eye, creating an overall fog in the image and vastly reducing the clarity of the image. Secondly, the area of the retina observable is very small – typically 5 to 10% of the retinal area due to the restricted size of the pupil. This latter point is why eye care practitioners will regularly apply drugs to a patient’s eye in order to force the pupil to dilate – a practice that is both inconvenient and uncomfortable for the patient.

The Optos team quickly converged on an approach using scanning lasers to overcome the first issue, but also realised that innovation was required to overcome the critical problem of increasing the imaged area of the retina.

A key design challenge was to create the highest possible scan angle incident to the eye, in order to maximise the imaged area of the retina, and to have it pass through an undilated pupil so as to relieve patients from undergoing the discomfort of mydriasis. Elliptical mirrors provide the perfect geometry for allowing the creation of a ‘virtual scanning point’ at one focal point by positioning a real scanning element at the other point of focus.

A creative mechanical scheme was developed to first produce a fast vertical (or line) scan of the static laser beam and secondly to sweep that fast line scan horizontally. The fast line scan is created by a very high speed, highly accurate, multifaceted mirror whose design is constrained by the linear speed accuracy of the scan and the requirement for minimal deviation from a theoretical perfectly straight line. Such are the demanding requirements in this area, that Optos continues to manufacture this component in-house as part of its intellectual property – despite approaching many external (including some defence) contractors.

The horizontal or ‘slowscan’ then sweeps the line scanned beam horizontally across the ellipsoidal mirror, and hence across the patient’s retina. The final design challenge was the assembly of all these components into a single mechanical scheme that did not compromise the large scanning angles, did not interrupt the beam path and allowed the patient’s eye to be accurately positioned at the virtual scanning point. The resulting design is patented and implemented in the Panoramic200 device.

This system creates a huge leap forward in the imaged area of the retina – up to about 80% – and is limited only by the shape of the skull around the eye orbit. The images produced by the device are branded as an optomap® image. The scanning system has been designed to operate through a two millimetre aperture (or a constricted pupil), thereby obviating the need for dilation drugs. Additionally, the scan time is less than a third of a second and the lasers used are very low power, leaving very little or no after glow. All of these points result in an innovation that enables a significantly more comfortable retinal examination for the patient.

As the Panoramic200 (P200) device was emerging from the lab, further innovation was applied – this time in the form of a commercial approach to the market. It was recognised that primary care physicians were the target users for such a device, and equally that such customers were unlikely to be able to afford such a high value piece of capital equipment. So a unique business model to the industry was developed that allowed customers access to the technology for a pay-per-use fee.

This model affords some distinct advantages, but also some clear responsibilities for both Optos and the customer. The latter implies that Optos retains effective ownership of the equipment for life and also demands that the customer images an agreed minimum number of patients each month. Such an approach creates a close relationship between Optos and the medical practitioner which has a variety of implications. First and foremost, the contract demands a service relationship whereby Optos maintains the equipment and trains the medical staff on how to get optimal results. This is reinforced by the design of the system software which, on a daily basis, downloads log files over the internet. The log files contain information about the technical performance of the equipment (for instance laser power, or scanner power consumption) and usage. Processing this information enables Optos to take appropriate action at the site – either by maintaining the equipment, or by reinforcing staff training to ensure optimal productivity in the practice.

A second and critical aspect of the relationship is in the ongoing technical value of the equipment. Proprietary software was developed by Optos to not only control the scanning equipment whilst capturing the image, but also to provide an effective method of reviewing the image for any medical abnormalities. Optos provides free regular updates of this software in order to keep the customer at the very leading edge of imaging capability. This might come in the form of new image types, higher resolution images, or improved methods to study the optomap® images.

A good example of this can be seen in the latest software release that contains the capability of projecting a retinal image onto a three dimensional representation of the human eye – called 3DWrap. The ability for the patient to sit side by side with the eye care practitioner and view an image of their own eye, be educated by the practitioner and have any abnormalities explained, has been cited by customers as a significant advantage of the technology.

It is estimated that approximately 160 million such examinations are performed annually in the company’s existing markets – in the US, Canada, Germany and UK. At the time of writing, Optos was in the process of commercialising its latest device – the P200MA. This is a complete redesign of the P200 device, incorporating changes to deliver even more imaged area of the retina, higher resolution, and crucially angiographic capability. Device trials performed in the USA last year might indicate that an ultrawide field angiographic retinal image, enables retinal surgeons to improve their treatment plans for patients with diabetic retinopathy and achieve better outcomes. Five year old boys of the future no longer need be subjected to lengthy, uncomfortable eye examinations and their sight could be saved as a result.

Alastair Atkinson joined Optos in August 2003 as Global Product Director. From 2000 to 2003, Mr Atkinson was a director at Hewlett Packard Consulting Services,working within multi-national companies on improvement programmes. From 1985 to 2000, he worked in the product field at Hewlett Packard, where he was responsible for the engineering and manufacturing of one of Hewlett Packard’s most profitable product portfolios. He is a member of the Institute of Electrical Engineers (MIEE) and is CEng chartered.

See http://www.optos.com A ‘Computer Interactive presentation’ about Optos technology and the MacRobert award is on view in the Wellcome Wing at the Science Museum from February 2007 until January 2008.