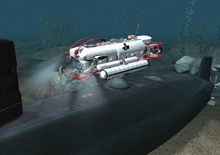 The manned submarine rescue vehicle is highly manoeuvrable and can dock with a submarine's escape hatch at angles up to 60 degrees out of alignment, ensuring access across a uniquely wide range of sea-bed rescue scenarios.

NATO has requested that a new submarine rescue system be built that is available to all, wherever they may be in the world. The UK Ministry of Defence placed the contract on behalf of partner nations France and Norway. The resulting manned and unmanned systems will be launched later this year. Bryan Luke, the submarine rescue project controller for Rolls-Royce, sets out the innovations that the new system will bring to underwater rescues.

The Kursk: a name that still rings with distress, more than six years after this Russian nuclear-powered submarine sank with the loss of her entire 118-man crew.

The cause of the disaster is well-documented – in August 2000, highly concentrated hydrogen peroxide used as torpedo propellant seeped through rust in the torpedo casing. Here it reacted with copper and brass in the tube from which the dummy torpedo was to be fired as the opening salvo of a naval exercise. The ensuing chain reaction triggered a chemical explosion, which ripped back through an open water-tight door in the torpedo room through the first two of the nine compartments of this massive Oscar-class boat.

Efforts to order an emergency rise to the surface failed, probably because the Captain was overcome by smoke that quickly swept into the command centre through air conditioning ducts. Instead the boat sank, colliding with the sea floor and sparking a much bigger second explosion as further torpedoes blew up. The nuclear reactor compartment withstood this second crippling blow but the few surviving crew members, huddled in a stern compartment, succumbed to cold and suffocation before they could be rescued.

Four days after the sinking, after failed attempts by Russian vessels, the Russians accepted offers of help from the British and Norwegian governments. Working at a depth of 110m, British deep-sea divers reached the aft compartment’s escape hatch but found the compartment flooded and hope of rescue gone.

Could such a disaster occur again?

So powerful is the safety-critical drive of submariners and submarine engineers that the probability of serious incidents is small. But that probability is still enough to convince NATO that a highly capable, quick-reacting and long-life rescue system is a high priority – a system designed to overcome the sort of difficulties and delays caused by the hardware, operational and weather-related challenges that hindered the Russians’ Kursk rescue effort.

Hence the NATO Submarine Rescue System, or NSRS, the focus of a £47 million contract for Rolls-Royce awarded by the UK Ministry of Defence acting on behalf of Britain's partner nations, France and Norway.

Later this year the system will replace the current UK rescue vehicle, the LR5, which worked on the Kursk rescue attempt.

Skills and expertise from no fewer than six world-class defence and offshore engineering specialists are coming together under the project management of prime contractor Rolls-Royce to create a manned submarine rescue vehicle, a highly advanced remotely operated vehicle, a portable launch and recovery system, underwater navigation, tracking and communications equipment, decompression systems and base facilities – all of which will combine to give endangered submariners a better chance of rescue than ever before.

This is the first time a dedicated submarine rescue system has been developed in which all equipment and services are truly integrated, posing huge technical complexity. The system includes the operation of the 27 tonne manned submarine rescue vehicle (SRV), designed to shuttle to and from a stricken boat and retrieve up to 15 submariners per trip.

Manoeuvering and retrieving the SRV in seas with five-metre waves is a basic requirement of this system, yet it is something no-one has been able to achieve reliably before.

The reasoning behind the development of this capability relates to a potential operational weakness of traditional submersible vessels, which have relied on a diver getting into the sea to secure a recovery line for bringing the vessel on deck. With existing systems,weather can often make this too hazardous for the diver, meaning operations need to go on hold until conditions improve. So NSRS is using a diver-less recovery system for the first time, which needs to operate with 100 per cent effectiveness and safety throughout extremes of maximum wave height and mother-vessel roll angle, enabling recovery work to continue unimpeded at this time-critical stage.

The system secures a guideline to the SRV, down which an automated catcher is lowered to secure a lift-line. This needs to be held in constant tension to avoid excess shock-loads on any part of the system, so the lifting gear is hydraulically damped. It means we can control and reduce the relative movement between the mother-vessel and the SRV in adverse sea conditions.

The lighter the better

The portable launch system, now undergoing trials in real-world dynamic environments, embraces another engineering challenge shared with all the other elements of the NSRS: weight-minimisation. This requirement arises because the launch hardware, like the rest of the overall system, needs to be light enough to be flown to the region of the accident.

Throughout, engineers are having to devise and deliver a system that is fully air-transportable yet rugged enough to operate reliably in very demanding sea conditions. Weight is a major driver behind every design decision, similar in a way to the disciplines of aerospace engineering. The engineering team behind NSRS have combined aerospace-related technologies into much of the design of the SRV and its portable launch system. For instance,we have used computer-modelling to help define the safe operating range of the SRV and its recovery system, similar to the modelling that goes into determining the conditions in which a helicopter can land on a pitching, rolling vessel at sea.

Leading-edge marine technologies are exploited too, such as the eight ZEBRA batteries that power and propel the SRV. Each is rated at 17 kW h.These sodium/nickel chloride units have almost twice the energy density in a reduced volume than lead/acid options, doubling the craft’s endurance time and allowing continuous operation of the dive vessel without downtime for recharging.

In addition, this system will, for the first time, be able to deliver three under-slung pods containing emergency lifesupport stores by taking up station directly next to the submarine’s escape hatch, where it can transfer the pods in minutes rather than hours.

Until now, the transmission of vital navigation and command information has relied on through-water transmissions. These can be affected by temperature and salinity conditions, making them limiting or even misleading. Kongsberg Maritime, one of the seven-strong engineering team, is creating networked command information systems that will integrate a multitude of underwater and above-water sensors and communications links to give rescuers the reliable information they need to succeed.

Most novel of all, perhaps, is an element provided by Rolls- Royce: a lightweight fibre-optic umbilical that is unaffected by sea conditions – the first time this approach has been used on a free-swimming rescue vehicle. Through-water systems will be kept and used for back-up.

This fibre-optic cable achieves another ‘first’ for NSRS by allowing real-time monitoring of the situation from the mother ship. Information can include video and voice messages, providing better data for medical staff to plan necessary action.

All this technology, innovation, dedication and bravery underwater achieves nothing if failures occur at later stages of the mission. Evacuees are likely to have been exposed to high ambient pressure inside the submarine, so pressure can be matched within the rescue vehicle as it resurfaces and is hoisted aboard the mother vessel. Once on deck, survivors will enter a ‘transfer under pressure’ module in which medical teams can treat up to 83 rescuees simultaneously with a total throughput of up to 150.

The reasoning behind the entire design and development effort by the NSRS team has been the need to create a completely integrated system that addresses many of the shortcomings of previous and current submarine rescue systems. Everyone involved in this initiative must always remember that this is not a oneoff system that will be kept in a glass case and used only when the first emergency occurs.

It will be exercised extensively throughout its life, including at least one sea deployment each year. This system needs to work with 100 per cent safety from its very first trial to the end of its operational life. The engineering attention going in to NSRS today could bring some very important rewards in years to come.

Bryan is the Rolls-Royce Project Engineer for the NATO Submarine Rescue System. He began his career in the marine industry with BP Shipping in the early 1980s, joining Rolls-Royce later that decade to help develop and apply special tooling for working on submarines. Bryan has managed engineering aspects of the fleet-wide pintle modification undertaken on the UK’s nuclear submarines before taking up his current task with NSRS.

Bryan is grateful for the assistance in writing this article given by John Hutchinson. John is an independent writer on a range of topics including technology – with experience in various corporate and media communications roles.