Airbus UK, a MacRobert Award 2006 finalist, designed and manufactures the wings of the A380, the world’s largest passenger aircraft. Rob Bray of Airbus UK describes the technical challenges faced in designing the wings and how advanced technology and innovation were key to meeting the performance goals. 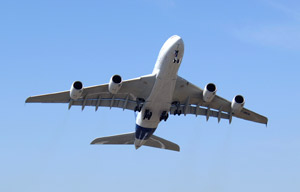 From its beginnings in 1970, Airbus has gradually expanded its product line from just the A300 to a wide portfolio of aircraft. These aircraft range from the relatively small, short range A320 with 150 seats, to the much larger, longer range A340 with over 300 seats.

By the late 1980s and early 1990s initial versions of these products had arrived in service, or were soon to enter service. At around the same time Airbus marketing analysts, whose role is to examine future market trends, began to perceive a need for an aircraft at least as big as, if not bigger than, the 400-seat Boeing 747.

Subsequent discussions with airlines worldwide confirmed that the new aircraft would not only have to be very large (larger than any other passenger aircraft ever built, in fact), but would also need to be able to fly further than the 747, have a more spacious cabin and be significantly more fuel efficient and environmentally friendly. The resulting design studies culminated several years later in the first flight of the A380 in April 2005.

With market interest established, the early design studies showed that the design and engineering challenges would be substantial. Today’s commercial jets are the result of more than 50 years of optimisation of what is essentially the same concept, hence significant improvements are hard to realise.

While the larger number of seats required would partially help to meet the requirements of at least 15% lower operating costs per seat, simply scaling up an aircraft based on existing technologies was not sufficient, especially when the additional requirements of more cabin space per passenger, additional range and significantly lower noise were taken into consideration: in order to meet the targets innovation would be required.

For the airframe – the basic structure, without engines – of any aircraft, the wing is the crucial element in meeting performance and economic targets. The fundamental design aim is to generate sufficient lift while keeping the weight and drag to a minimum in order to minimise fuel burn and maximise range. However for a wing, these are often conflicting requirements because the minimum drag design is not the minimum weight design, and vice-versa.

To complicate the challenge, the wing is also the main fuel tank of the aircraft, so it must be large enough to hold enough fuel for the flight while also sporting enough spare capacity to allow for future developments of the aircraft, such as longer-range versions.

For the A380 the requirements of high capacity and very long range led to a weight at take-off that could exceed 600 tonnes when taking into consideration the developed versions (something which needs to be done in the initial design phase) and hence the need for a very large wing to lift the aircraft. However, too large a wing would trigger major compatibility problems at airports, not least in terms of manoeuvring around the airports and having sufficient space available at the loading gates. Due to this, geometric constraints were set on the wing to ensure that the aircraft would have minimal impact on airports. It is pleasing to note that now the aircraft has been built and has flown to many of the world’s airports, ground operations are usually handled with ease thus validating this original design approach.

The route to success took a twofold approach: firstly challenging and improving all individual aspects of the design (for example aerodynamics, structures, loads, systems and also the manufacturing process) and secondly improving the design integration process.

In terms of the individual disciplines, new aerodynamic prediction methods were developed and employed based on the results of research activities, partly funded by the Department of Trade and Industry. These allowed the various aircraft components such as wing, engines and fuselage to be accurately modelled and aerodynamically optimised as a whole, rather than to analyse each individually and then apply correction factors to account for the interaction between each component.

In parallel we needed to ensure that the aerodynamicists could devote their time to developing the wing rather than spend it laboriously processing the vast quantities of data generated by the aerodynamic design process. To achieve this aim, a new data processing suite was developed which allowed a more efficient transfer of aerodynamic data (both predicted and wind tunnel generated) between the various computer programmes.

To shorten design times still further, the wind-tunnel testing process (used to validate computer predictions) was improved by shortening the wind-tunnel model manufacture time, speeding up the time taken from generating initial computer predictions to receiving wind-tunnel results. This was achieved by using Stereolithography, an early application of the developing ‘Additive Layer Manufacturing’ technology, to rapidly generate parts for wind-tunnel models. Using geometric data taken directly from the aerodynamic prediction tools, a laser was used to create the final wind-tunnel component directly by solidifying a resin base material.

Structural engineers also developed new optimisation techniques. Lightweight ‘trussed’ ribs, part of the internal wing skeleton, were developed for the leading edge of the wing in partnership with an external software company, which saved several hundred kilograms of weight. Meanwhile the design philosophy for all components was examined and changed where appropriate. For example, the box beam structures that attach the trailing edge flaps to the main structure of the wing were changed to a predominantly carbon fibre reinforced plastic (CFRP) design, achieving significant weight savings. Similarly, a detailed investigation of the main wing ribs led to the decision to make about half their number in CFRP for additional weight saving – the first such innovation for a large civil aircraft.

Where it was not effective to introduce such composites, the traditional aerospace 2000 and 7000 series aluminium alloys were developed in conjunction with the material suppliers to optimise their material properties for the A380 application. Combined with design optimisation techniques this enabled the wing weight to be reduced by several tonnes.

While aerodynamic and structural efficiency obviously affect the overall performance of the wing, the weight of the wing is significantly influenced by the loads which the structure must react. To a large degree these loads are generated by aerodynamic forces developed when an aircraft makes a manoeuvre or encounters turbulent air. The A380 is the first commercial aircraft to use a combined Load Alleviation Function (LAF) to minimise the effects of both flying situations. When the aircraft executes a manoeuvre the system is designed to deflect the wing movable surfaces to minimise the loads. In a similar fashion the controls will also deploy when the aircraft encounters turbulence, again with the aim of reducing loads on the wing.

In addition, patented load reduction techniques were developed to enable the fuel system to control the loads actively on the wing in all phases of flight, continuing a tradition started in the UK with Concorde. Typically, Airbus aircraft pump fuel between the wing tanks and tail tank to maintain the centre of gravity in the most advantageous place to minimise the drag of the aircraft in cruise. This happens too on the A380, but here the technique goes one step further.

In the A380 fuel is also pumped from the inner wing tanks to the outer wing tanks after take-off and then in the opposite direction before touchdown, which reduces the “ground-air-ground” fatigue loads on the wing (Figure 1). The combination of these load alleviation techniques saves more than two and a half tonnes of wing weight.

The A380 has also benefited from improved manufacturing techniques, not only to optimise the build process but also to save weight. The metallic sheets (the ‘skins’) which make up the top and bottom wing surfaces account for around a quarter of the wing weight and hence need careful optimisation. The thickness of these skins varies considerably and non-uniformly due to the multitude of loads which must be catered for, such as global wing bending loads and discrete load inputs due to engine, flap support system and landing gear attachments.

While modern machining methods can get close to achieving the complex three-dimensional geometry required by the structural engineers, there are limitations in the process. These limitations can result in some structurally unnecessary material being left on the skins from which a weight penalty is incurred. So the A380 wing now benefits from a patented machining method of milling longitudinal strips of varying heights into the raw material billet – think of it as mowing the lawn with a variable blade height. Result: significant weight saving plus manufacturing advantages.

While all these advances in individual disciplines succeeded in their own right, the integration of these disciplines using Knowledge Based Engineering (KBE) techniques was the key to achieving the performance targets (Figure 2).

Compared with past programmes, KBE enabled a significant reduction in time needed to generate a wing ’design loop‘ (the production and analysis of a specific wing geometry and structural layout). On past programmes it could take up to a day to generate a three-dimensional wing surface from the two-dimensional aerofoil sections produced by the aerodynamicists; with the new tools this was reduced to a matter of minutes. Similar time reductions were also achieved in fuel tank modelling and structural sizing and weight estimation. Additionally, the capability of the KBE toolset to enable concurrent working on a common set of data and the ability for the specialist departments to “plugin” their own sophisticated design tools at a much earlier stage of the design process, provided improvements in quality and accuracy of results.

With this ability to create more time for design, it was possible to explore a large number of wing design concepts before the final down-selection deadline. Such concepts ranged from top-level considerations of how the aircraft lift should be distributed across the wing and the rest of the aircraft (aimed at understanding the fundamental weight ‘v’ drag trade-offs), to more local studies such as investigating the possibility of making the wing thicker to ease the installation of the landing gear or flaps, for example. Using a systematic process, around 100 such concepts were generated and analysed within just six months, leading to the selection of two wings for a final ‘virtual fly-off’. The result of this process was a significantly lighter wing (by several tonnes) and a better aerodynamic standard than previous products – both key factors in reducing fuel burn and enabling the A380 to meet its guarantees.

The resulting A380 wing is a world-beating product that reinforces the strength of aerospace engineering and manufacturing excellence in the UK. Its success is as much a testament to the benefit of developing strong design processes as to the quality of the engineering itself. The aircraft received its Type Certificate from European and US airworthiness authorities in December 2006, clearing the way for fare-paying passengers. The first aircraft is scheduled for delivery to Singapore Airlines in October 2007.

Rob Bray studied Aeronautical Engineering at Manchester University and graduated in 1982. After graduating, work as a research assistant in gas dynamics at Cranfield College of Aeronautics led to an MSc in 1984. A six year spell with BAe Dynamics at Filton, Bristol followed before Rob transferred to the Commercial Aircraft Division of BAe in 1990. In 1994 Rob started work on the A3XX, the project name for the A380, and today his role is Deputy Head of Engineering A380 Wing.

This year's lecture 'Carpe Diem: the Dangers of Risk Aversion' was given by Professor Roderick Smith FREng ScD FIMeche

Maximising the elimination of carbon generated in creating, taking down and maintaining a building

Creating car sounds that are appropriate to their marques