An engineering team from Staffordshire University has met a clinical need by designing and developing a surgical device that re-aligns fractures of the tibia and distal femur. Its design impressed the MacRobert Award committee, who chose it as a 2007 finalist. Professor Peter Ogrodnik, Managing Director of Intelligent Orthopaedics Ltd, writes about how engineers and medical staff combined forces to produce the Staffordshire Orthopaedic Reduction Machine (STΦRM). 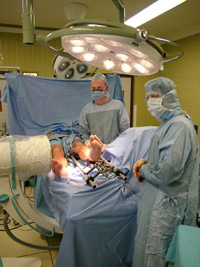 STΦRM is a re-usable surgical device (Figure 1). Initially developed as a control device within a research project investigating how fractures heal, it has proven to be highly successful for treating lower leg fractures in its own right. This innovation provides controlled traction and alignment for the fractures and has been shown to significantly improve fracture reduction and shorten operating times. STΦRM was introduced to the marketplace in 2005 and is now being used in hospitals around the world.

The tibia (or shin bone) is the most commonly fractured long bone in the human body. In the UK there are about 45,000 operative procedures conducted on tibial fractures every year. Nature is able to heal fractures on its own but cannot re-align the broken bones – it is up to orthopaedic surgeons to manage fractures.

When a surgeon is presented with a tibial fracture the first task is to determine whether the fracture is ‘stable’ or ‘unstable’. A stable fracture is one that does not shorten (or collapse) under an axial load. Stable fractures are commonly treated in a simple plaster-of-paris cast.

Unstable fractures, however, shorten with the slightest axial load. Some fractures are evidently unstable because of the degree of damage; others are not obvious and require assessment. Unstable fractures need much more support than a cast can offer and, generally, need surgery to apply a relatively substantial supporting structure (see ‘Unstable Fracture Fixation’ section).

Irrespective of the type of fracture, the surgical team need to bring the fracture fragments back into alignment. Ideally, this is to the exact position they were prior to the fracture. This process is called ‘reduction’ (a surgeon ‘reduces’ a fracture). This commonly involves manual force to manipulate the fractured limb.

In the case of unstable fractures this procedure is often very difficult and time consuming. Due to the nature of the fracture, all of the muscle forces are working against the surgical team; the forces are trying to shorten the leg and collapse the fracture at every opportunity. The tibia is particularly difficult because the bones and muscle forces are comparatively large. Not only has the fracture to be reduced, but also everything must be held in place whilst the fracture is being treated (which can be for a very long time).

In most operating theatres around the world you would normally see a very strong assistant providing the necessary brute force to perform this task. Some surgeons employ devices to help them, such as traction tables, but no simple solution had been found. That was until the orthopaedic surgeons at the University Hospital of North Staffordshire got together with the mechanical engineers of Staffordshire University .

The Staffordshire Orthopaedic Reduction Machine (or STΦRM ®) is illustrated in Figure 1. It is one of the outputs of our team’s 15-year research programme in the management of tibial fractures. The sole purpose of STΦRM is to help the surgeon reduce a fracture of the tibia, irrespective of where the fracture is (within the entire length of the tibia) and irrespective of the preferred method of treatment. The device utilises much of the technology that any orthopaedic surgeon would see in their normal clinical practice.

With the fracture now aligned and restrained, the surgeon can concentrate on examining the reduced, fractured limb and select the most appropriate form of treatment. Thanks to the fractured limb being securely held, the end result will not be affected by the tools necessary to fix the fracture. Once the fracture is fixed, STΦRM is removed and only the fixation device is left on the patient.

It is worth noting that the reduction phase has been significantly shortened and hence the surgeons’ efforts are now targeted on treatment. In normal circumstances this would be the ‘panic moment’. The assistant would be applying as much force as possible to restrain the fractured limb and the surgeon will be endeavouring to fix the fracture before reduction has been lost. STΦRM has removed the “panic moment” from this procedure.

As the whole operation is shorter the patient benefits, as morbidity and time under general anaesthesia is directly related. For the hospital, there is an associated reduction in direct costs. Now that the procedure has been standardised, operating times are made repeatable and this has led to improved planning and thus increased theatre utilisation.

To an engineer the idea of separating reduction and fixation processes sounds relatively simple. STΦRM’s design has taken what is considered a complex problem (that has interactions, cross-overs and unknowns to spare) and then reduced it to its simplest form. The solution, therefore, is not only optimal in terms of form and function, but also in terms of use of technology. The efficient use of technology cannot be stressed enough. Whilst it is tempting to use a computer for everything, this might have resulted in a perfect engineering solution that never left the engineering laboratory!

STΦRM has brought the concept of jigs and fixtures to the orthopaedic trauma operating theatre. In fracture management this means that surgeons and engineers are now able to better develop the next generation of fracture fixation systems in the full knowledge that they do not need the fixation system to also be able to reduce the fracture. Fixation systems can now be placed onto a near-perfect anatomically reduced fracture that is securely held in place; and that all of this is achieved through a standardised, short, repeatable procedure.

STΦRM is being sold worldwide and Intelligent Orthopaedics Ltd are about to launch their new fracture fixation system, called IfS®, which capitalises on our fracture management research and the benefits of STΦRM.

STΦRM’s procedure is simple. A self drilling, 2mm stainless steel ‘k-wire’ is inserted using a power drill at the knee; another is inserted at the ankle. The wires are tensioned using the patented wire-lock and tensioner (knob A). The tibia can then be put under traction using knob B until the tibia is the correct length. The force is applied between the two k-wires and so it is not being transferred to the knee and hip joints; nor is it applying excessive force to the surrounding soft tissues and there is no need to support the body to stop the patient sliding down the operating table.

Rotation of the foot, with respect to the knee, is now correctable using knob C and rotation of the whole yoke D. The hydrostatic forces of the soft tissues and muscle interaction tend to pull the fracture into gross alignment once traction and rotation have been corrected. In most cases this is sufficient to achieve a reduction as good as, if not better than, traditional techniques.

The device is re-usable and must, therefore, be cleaned and sterilised before it can be used again. The highly aggressive cleaning and sterilisation process forces all moving parts to run ‘dry’ with little chance of lubrication. It is difficult to hide moving parts behind seals as these will almost certainly make it difficult for us to provide a certificate confirming the device as “sterilisable using normal processes”. Therefore threads tolerances, bearing surfaces and material selection become very important.

The traction knob (B) is made of stainless steel. If the traction rod were also stainless then the combination of materials would almost certainly cause disconcerting levels of binding. Applying a coating is not viable within a sterile operative field (unless it could be demonstrated that any wear particulates were biocompatible). The risk of particulates of unknown origin entering an open wound is too high, and hence only medical grade materials are used throughout. To bring in a new material (even if used by engineers the world over) would involve regulatory trials spanning several years.

Close proximity of these components to open wounds and hence blood was also a consideration. Blood is an obvious health/contamination hazard, but when dry is a powerful adhesive. To enable STΦRM to move freely when contaminated was a complex design issue, as was designing in the ability to be thoroughly cleaned.

The three common forms of unstable fracture treatment have a common issue – they are best applied when the fracture is anatomically reduced. The first, and most common method is the intra-medullary nail (Figure 2a). This is an anatomically curved, cylindrical rod (normally stainless steel or titanium alloy) that is forced into the medullary canal (the marrow cavity that runs down the middle of long bones). Problems with this treatment include anterior knee pain, high infection rates and mal-rotation of the foot. The second device is the plate (Figure 2b). The high incidence of serious infections has limited their use. Even so, plates are often used at the extremes of the tibia (plateau fractures, for example). New minimally invasive plates have been developed to minimise infection rates but they need to be applied to a perfectly reduced fracture. The third method is the external fixator (Figure 2c) which, with its low incidence of serious infection and no residual knee pain, should be a clear winner. However, the over-complicated designs and geometries needed to enable reductions to be performed make them generally disliked by the surgical community and only command 10% of the market. Unlike the previous two methods, the external fixator is always removed once the fracture is healed.

The sequence in Figure 3 illustrates a single case study in which the patient was involved in a collision with a car. Due to his multiple injuries the chance of survival was thought to be low and therefore the fracture remained untreated and he was admitted to an Intensive Therapy Unit. Three weeks later he awoke with one leg shorter then the other (Figure 3a); the large fragment has ‘slipped’ and the soft tissues have ‘settled’ into this shortened position. This is a severe injury and one which most orthopaedic surgeons would call a nightmare fracture. STΦRM’s design allowed the surgeon to apply a discrete amount of traction to extend the limb in stages and then leave the soft tissues to move back into place (3b and 3c) during the intervening ‘rest periods’. Over a period of 30 minutes the fracture was slowly stretched to normal length and subsequently fixed with a proprietary external fixator (3d). The patient’s fracture went on to become clinically healed, at the correct length and without the need for further intervention.

Professor Ogrodnik is Managing Director of Intelligent Orthopaedics Ltd and Professor of Engineering Design at Staffordshire University. He is leading the university’s developments in medical engineering. His first degree is in Mechanical Engineering and his PhD was concerned with the analysis, computer modelling and subsequent design of journal bearings in full-scale turbine generators. He has since had a career change and has spent the last 15 years developing expertise in medical devices development.