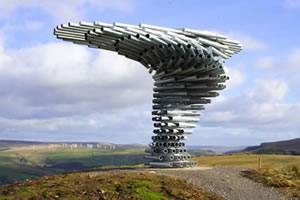 Part of the Panopticon project in the Lancashire Pennines © Micheal Barham

A structure commissioned, engineered and built as part of the Panopticon project in the Lancashire Pennines has had an extremely successful return from the 2007 Royal Institute of British Architects (RIBA) awards ceremony held in London in October. The team behind The Singing Ringing Tree project won a RIBA Award, was one of 14 other UK projects to win a RIBA National Award and was also shortlisted for the RIBA Stephen Lawrence Prize.

Tonkin Liu, the structure’s architects, had their design chosen by the Northwest Regional Development Agency who were looking to erect a series of 21st century art structures across the eastern Pennines. The Singing Ringing Tree, as the design was named, became the third of four such structures and was opened to the public in December 2006.

To be positioned in the blustery hills around Burnley, the structure was purposefully designed to become an interactive piece for the public. As the name The Singing Ringing Tree suggests, acoustic interplay with wind was key to the design.

Tonkin Liu sought advice from a Canadian professor of engineering who had experience in making metal ‘sing’ with the wind and then contacted structural engineer Jane Wernick Associates to help bring the idea into reality. The team discovered that using galvanised steel pipes with a 114 mm diameter and a 200 mm aperture was the ideal combination of material.

Jane Wernick implemented a working model that would guarantee a stable, functional and durable structure. The large forces involved made this a difficult job as it not only had to withstand the pressures of its own weight, but also people climbing on the frame and the problems associated with natural elements. Using a combination of computer modelling and old-fashioned mathematics, the engineer worked out where the lines of force would fall and advised the fabricator on the best methods of construction.

The result of this collaboration between architects and engineers was assembled and built on site. The Singing Ringing Tree can be seen at Crown Point overlooking Burnley or at http://www.panopticons.uk.net/

The Royal Academy of Engineering’s 2007 Annual Soirée and Exhibition took place in June at Queen’s University Belfast in association with the Irish Academy of Engineering and sponsored by Bombardier Aeropsace. Attendees included the Academy President (Lord Browne of Madingley FREng FRS), the President and Vice Chancellor of Queen’s University Belfast (Peter Gregson FREng), the Duke of Abercorn KG (attending on behalf of the Senior Fellow, HRH The Prince Philip Duke of Edinburgh KG KT) and Mr Ian Paisley Jnr MLA (Northern Ireland Assembly) and over 150 Fellows and their guests.

Speaking at the dinner in the Great Hall, Lord Browne told the guests that today, “Engineering is almost unique amongst the academic disciplines and professions because it empowers you with the potential to make a difference”. He expressed the Academy’s pleasure to be involved in the evening and hoped the guests would enjoy the exhibition.

The Exhibition was entitled Wealth Creation through Partnerships and revealed some of the cutting edge engineering research being carried out today. A particular highlight of the event was the display of Bombardier Aerospace, whose Belfast-based operation manufactures and designs large aircraft structures.

Further pictures can be seen at www.raeng.org.uk/QUB

Technology students, academics, senior industry executives, high-ranking government officials, members of scientific and technical institutions, and members of the media all gathered for the prestigious Science, Engineering and Technology Student of the Year Awards ceremony at Alexandra Palace, London in September 2007. Organised by the World Leadership Forum, the event is now in its ninth year.

Undergraduates and their lecturers from the UK and the Republic of Ireland are eligible for nomination in a number of different categories, with the two most prestigious awards being the overall Science, Engineering and Technology Student of the Year, and the Lecturer of the Year which is given to the lecturer of the leading student.

The star student of the night was Craig Benson from the University of Liverpool. His project, ‘Do Genetic Variants of the Programmed Death Receptor I (PD-I) Influence Treatment Response to Antiretrvorial Drugs?’, was enough to win him the Best Pharmacology Student and such was the quality of this study that he was also made the Science, Engineering and Technology Student of the Year. Dr Andrew Owen, Craig’s lecturer at Liverpool, was recognised for his outstanding efforts and was made the Lecturer of the Year.

As ever the dinner and awards ceremony was a great success which highlighted the continuing ability and potential shown by students, and the ever present expertise and leadership inherent in lecturers across the UK and Ireland.

In 2004 The Royal Academy of Engineering started a scheme, Visiting Professors in Integrated System Design, to bring the practical experience of integrated system designers into academia. The scheme has 20 Visiting Professors that help to develop the teaching methods and materials, and improve the system awareness of all graduate engineers.

It became apparent that there was no universal understanding of how best to develop this system awareness. Consequently the Academy put together a study group to develop a short treatise on the principles of Integrated System Design to act as a guide to educators, students and indeed practising engineers. The booklet Creating Systems that Work is the product of that group’s work and was launched in June 2007.

The booklet’s primary purpose is to help universities introduce system thinking into undergraduate engineering courses. Dr Chris Elliott FREng, one of its co-authors, says, “It has been received with enthusiasm by several universities who were already aware that real engineering means solving the problem, not just the equations, and they have found that the principles help to underpin their teaching.

“The first print run of 2,500 disappeared in weeks and a second print run of 5,000 is going down quickly. We had a secondary purpose, which was to influence the people who procure, manage and build engineering systems. That is also beginning to find its legs. Half of the second print run was taken by the Defence Science and Technology Laboratory and other companies in fields ranging from construction to railways are also referring to the principles.”

To view the six principles established by Creating Systems that Work and to read about three case studies gathered together by the working group, click on this PDF