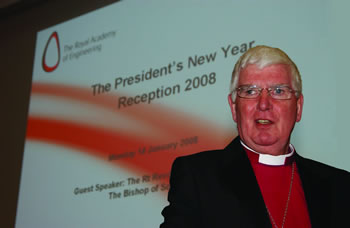 On 14 January The Royal Academy of Engineering welcomed the Bishop of Southwark as guest speaker for this year’s reception hosted by the Academy’s President, Lord Browne of Madingley. The Rt Revd Dr Tom Butler is a chartered engineer and a regular contributor to Radio 4’s ‘Thought for the Day’. Unsurprisingly he gave a theological slant to some engineering issues of the day in his speech. The President also took the opportunity of the New Year reception to present a prestigious Academy award to the head of Rolls-Royce, Sir John Rose.

“To sin is human; to forgive, divine; to check is engineering.” So started a unique address by the Rt Revd Tom Butler. Reflecting on how his passion for engineering and his church ministry have continually interwoven over the years, Bishop Tom challenged the Academy to rethink its message to young people on why they might view engineering as their future.

Bishop Tom heard his call to ordination while he was an undergraduate studying electronic engineering at the University of Leeds. He resolved to join the Community of the Resurrection, the Mirfield Fathers, who were active both in the slums of British cities and in Africa – particularly in South Africa. Tom Butler then spent six years as a lecturer in electrical engineering at the University of Zambia, not only helping to start a new school of engineering but literally helping to build it.

Then, during vacations, he would pack a toolkit, multimeter and some basic components, and he and his wife would visit remote rural mission stations and attempt to mend malfunctioning electrical equipment. They became engaged in the battle against malnutrition: campaigning for better nutrition and organising food imports and distribution. They also joined projects to build better houses for shanty town dwellers.

Looking beyond the universe

“People used to be optimistic that science would eventually be able to explain everything but things have turned out to be more wonder-filled and mysterious than might have been thought,” Bishop Tom told the evening’s gathering of Fellows. The Hubble telescope’s recent pictures of galactic rings continue to inspire the Bishop. They provide further evidence not only of Einstein’s theory of gravitation but also of the existence of dark matter, which cannot be observed directly but can be discerned by its influence on everything else.

“For me, that has echoes of the language of Christian mystics who, for centuries, have been saying precisely the same thing concerning the hiddenness of God’s awesome reality, which cannot be observed directly, for it is too massively real for human understanding, but it can be discerned by its influence on everything else.”

The Bishop warned “that the battle for engineering hearts and minds of new generations is being lost.” The Bishop challenged the Academy to use the burning issue of our time – climate change – to recruit a new generation of engineers to the profession. “The problem here can be part of the solution. The issue that is motivating young people today is that of global warming and climate change.

“It is becoming embedded in the curriculum and it is appearing in out-of-school activities, but it will not be solved without a plethora of engineering initiatives. This is a moment in history when children are interested in the very issue where engineering has things to say and things to discover and do. We should not miss the moment.”

The Academy also took the opportunity of the New Year Reception to make Rolls-Royce the first company to receive the President’s Medal for its initiative in promoting excellence in engineering. Instigated in 1987, the medal has previously only been presented to individuals.

Lord Browne of Madingley said: “Over the years, many engineers from Rolls-Royce have won awards made by this Academy. We decided to now award the President’s Medal to the company as a whole in recognition of its sustained contribution to technological and commercial excellence in engineering in Britain and around the world. It is a privilege to make this award to such a great company whose name has been synonymous with quality for over a century.”

Sir John Rose, Rolls-Royce Chief Executive, said: “It gives me huge pleasure to accept this award on behalf of Rolls-Royce, particularly as it comes as an endorsement of what I firmly believe, which is that engineering is very much a team sport. We could not achieve what we achieve as a company individually, because doing things of the complexity of making gas turbines and integrating complex systems, and supporting these things through service, is a job that requires a huge range of skills and capabilities.”