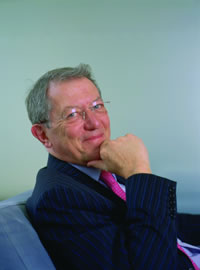 Sir David King stepped down as the Government’s Chief Scientific Adviser in December 2007 after seven years in post. He is starting a new career as the director of the newly formed Smith School of Enterprise and the Environment at Oxford University. Here, Sir David lays out his views on where the world stands in terms of climate change.

When I began my term as Government Chief Scientific Adviser in 2000 the world was a very different place in terms of attitudes to climate change – both internationally and in
the UK.

Yes, we had the UN Framework Convention on Climate Change (UNFCCC), the Intergovernmental Panel on Climate Change (IPCC) and the Kyoto Protocol. However the latter had yet to come into force (which did not finally happen until Russian ratification in 2004) and the level of global political engagement was by any reckoning woefully inadequate compared to the scale of the problem.

A small but vocal minority of sceptics on climate change, some supported by vested interests, were able to communicate very successfully the message that the science was uncertain, that scientific opinion was evenly divided and that the case for action was not made. The reality was quite different, but it is true that in some areas there were important gaps in the science.

Today, none but the most dogmatic or ill-informed can maintain that we do not face a problem with the potential to cause a catastrophe on a global scale, if we do not take the steps needed to avoid this. The most recent IPCC report sends a clarion call for action of increased intensity from the world’s scientists that politicians cannot fail to hear, even if some still do so reluctantly.

In the wake of the UNFCCC Conference in Bali we will see over the next two years how the world’s politicians measure up to the task. For myself, I see more cause for optimism now on the political front than I have at any time since 2000 – but the scientific prognosis has become increasingly worrying.

Beyond the political world we can already see the real world changing around us. The past century has seen average global temperatures rise by over 0.7°C. Even if we could cut emissions today immediately to zero – which we cannot – the temperature would continue to rise by around a further 0.6°C due to inertia in the climate system. Without mitigating action, a rise of up to 4°C by 2100 is possible. A rise of this magnitude approaches the difference in global temperature between the depths of the last ice age and today – in just the blink of an eye on geological timescales.

With rising temperatures the damages from extreme weather events will increase. About 20-30% of species are estimated to be at increased risk of extinction for a warming of 1.5-2°C. A temperature rise of 2-4°C would cause widespread loss of biodiversity, decreasing agricultural productivity and commitment to major increases in sea level from the melting of the Greenland ice sheet. Many millions face coastal flooding. Others are at increased risk of fluvial and urban inundation.

By 2020, between 75 and 250 million people in Africa will face increased water stress, and yields from rain-fed agriculture could be reduced by as much as 50%. Over the longer term the impacts risk becoming more devastating still, greatly magnifying the problems that the continent already faces through famine, poverty and disease.

I have characterised the problem bleakly. The good news is that we understand what we can do about it. The climate change challenge is in large part an energy change challenge. Within just a few decades we must radically decarbonise our energy systems. It is a big ‘ask’. Greenhouse gas emissions rose by 70% between 1970 and 2004, and the rate of increase is rising rather than falling.

Targets and international agreements are vital. However I believe the ultimate solutions lie elsewhere. We must bring urgently to bear the powerful combined forces of human ingenuity, practical engineering and entrepreneurialism. The task for politicians is to set the framework for these forces to operate.

Our track record is promising. History shows how these forces have combined many times to provide the huge and diverse array of advances we see around us today. We are rightly proud in Britain of our rich tradition of engineering innovation. The country that gave birth to Isambard Brunel and Frank Whittle must now be at the forefront of global efforts on climate change.

We are not starting from scratch. A multitude of promising low-carbon technologies already exist at different stages of development. We already have the capability to capture energy from the wind, our oceans and the sun. Carbon capture and storage offers the possibility to use fossil fuels without damaging our planet through emissions. Biofuels, if sustainability can be assured, offer huge potential to fuel our vehicles, and electric vehicles and hydrogen are attracting much attention.

Each technology offers its own mix of opportunities and challenges for research and engineering. Our task is to identify the most promising, through a portfolio approach rather than ‘picking winners‘, and to accelerate their development towards commercial deployment at scale. Some will inevitably fall by the wayside; others will succeed and shape our infrastructure through the rest of this century.

It is in response to this challenge that the UK’s groundbreaking Energy Technologies Institute has been established. The Institute crucially brings private and public sectors together in full partnership, with ambitions to support a £1 billion programme of research and innovation over ten years. It is a tangible demonstration of practical UK leadership, and I hope in time it will develop as part of a global network of centres of excellence, serving as a catalyst for international collaboration where this is the best approach.

Alongside advancing the technologies I have listed, and many I have not, energy efficiency and nuclear power already offer established and cost-effective solutions to reduce our emissions. I believe it is not a choice of either/or. That is not a luxury we have. We need to use every means at our disposal.

If one thing is clear it is that whichever technologies and solutions are developed in the years ahead, engineers will be at the heart of these endeavours.

In Africa and in the developing world, in the face of climate change and other threats, engineering will also be critical in providing water and sanitation, energy, shelter and telecommunications technology.

There has never been a more exciting time to become an engineer, and the world has never had greater need of the services of that profession.

Sir David King is Director of the Smith School of Enterprise and the Environment at Oxford University. Founded by a benefaction from the Martin Smith Foundation, the newly formed School will conduct multidisciplinary research on private solutions to environmental problems and promote environmental study as part of mainstream social science degree programmes. Before this, Sir David was the Government’s Chief Scientific Adviser and Head of the Government Office for Science (GO-Science) from October 2000 to December 2007 – formally the Office for Science and Innovation.