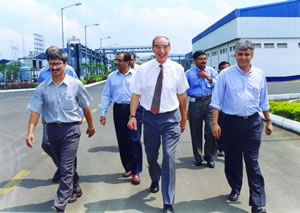 Sir Rob Margetts and team in Chandigar, India, at the opening of an ICI factory in 1996

As someone who has spent nearly 40 years in the profession, Sir Rob Margetts thinks that many people have the wrong idea about engineering. For him it is as much about a way of thinking as it is about making things. Michael Kenward OBE spoke to him about his experiences and current passions.

Sir Rob Margetts thinks that there could be a case for pensioning off the word ’engineering‘. It is not that he regrets his 40 years or so in the profession. He has enjoyed it greatly and happily calls himself an engineer. It is just that, for Sir Rob, the ’ing‘ part of the word carries excess baggage.

For too many people engineering means making things – big projects with lots of hardware or production lines turning out cars, computers, chemicals and other items. Seen in this way, engineering in the UK looks to be in decline. Much mass production has moved to cheaper locations that are also increasingly the places where the consumers of all manufactured output reside.

As Sir Rob sees it, manufacturing may have moved but engineering in the UK is far from declining. Indeed, the country has made incredible use of its engineers. It is just that many of them now work in different domains.

Sir Rob disagrees strongly with the suggestion that lingers in some nooks and crannies of the academic world that engineers are ’lost‘ to the profession when they move into, say, insurance or banking. “I don’t view it as a loss. I think it is a gain.” After all, the UK is a centre of the world’s financial system. “Our economy has moved in that direction.”

Margetts uses the term ‘virtual engineering‘ to illustrate his point. “Building models, understanding how systems work and assessing risk are all components of an engineering education that can be carried over to anything.” That ‘anything’ could be an insurance product or managing complex financial systems. “The skills required to run a hedge-fund for example are some of the most mathematical that there are and can use this virtual engineering.”

An important point for Margetts is that engineering “is an education, not a training. You have to get the concepts embedded in people. We should recast engineering as the skills that people have.”

Like many sixth formers back in the 1960s – and probably too many even now – engineering was unknown territory to the young Margetts. No one at school knew enough about engineering to encourage him to consider it as a career. So, when it came to deciding what to study at university, science was the first choice for a technically minded youngster.

Margetts opted to study chemistry at Cambridge. Well, it started off that way, but after two years he was, as he puts it, “starting to lose a bit of interest in the chemistry”. He then became one of a core of young ‘dissidents’ who have, over the years, taken advantage of the flexible nature of Cambridge’s natural sciences degree and moved mid-stream out of science and into engineering. His second year had included fluid mechanics, which gave Margetts a taste for the engineering side. After a crash course during the long vacation to catch up, he switched to chemical engineering for his final degree.

Back then, anyone with ambition graduating with a degree in chemical engineering either went into oil and petrochemicals, or took a job as a process design engineer with Imperial Chemical Industries (ICI). In those days the company was involved in just about everything chemical, from fertilisers to pharmaceuticals to plastics. It produced huge amounts of bulk chemicals that sold at very low prices along with small quantities of speciality chemicals that sold at high prices.

As Margetts rose through the ranks at ICI he held a series of engineering roles that covered many of the company’s core activities. One claim to fame was to have run an important power station that kept the site going at a time when industrial action was turning out the lights all over the UK. After directing various bits of the business, in 1988 Margetts became Director of Engineering for the ICI Group. In 1992 he became one of the company’s youngest board members.

While not denying the facts, there is a good chance that Margetts would disagree violently with this distilled interpretation of his ICI career. Too much about the individual: not enough about the teams that actually did all that work. Margetts insists, “teamwork is essential. I have been very pleased to have been a part of some very great teams. Good teams are the secret to great enterprises.”

Margetts illustrates the point by talking about his time at Legal & General. He was still with ICI when he joined them in 1996 as a Non-Executive Director. He left ICI in 2000 when, after the death of Legal & General’s then chairman, the company’s board asked him to take over.

Legal & General has come a long way since, thanks mostly, Sir Rob insists, to teamwork. “The team, with great continuity of management, has just stuck to trying to do things a little bit better each year. They are now one of the leading life assurers and fund managers in the UK, from small beginnings.”

Teams come up again when Margetts goes on to enthuse about another venture he chairs, and one that could not be further from Legal & General. There is nothing virtual about Ensus which is firmly on the heavy side of engineering. Its goal is no less than to help to wean the planet off oil for its mobility. Ensus is playing its part in what Margetts describes as the “super range of opportunities involved in the paradigm shift in engineering and climate change”.

Ensus is building a sizeable new biochemical plant, with team members that worked with each other at ICI. The company wants to become “a leading provider of bioethanol to the European transport fuels market”. The new facility will turn wheat into bioethanol and animal feed.

Margetts becomes distinctly enthusiastic when talking about Ensus, as well he might, having risked some of his wife’s housekeeping in the venture. “It is the closest thing I have done to being a proper entrepreneur,” he says laughing. Not only does Ensus draw on his time as a process engineer at ICI, it can also tap into the lessons he learned when he was in ICI’s agricultural and biological businesses.

At first glance, Ensus seems to confirm all the fears about biofuels. It may not be responsible for ripping up tropical rainforests, but isn’t there something uncomfortable about turning wheat into ethanol? Shouldn’t wheat go into the food chain?

Wheat is very efficient at turning sunlight into protein, he explains. However wheat alone is not high enough in protein to be used as the animal feed that accounts for about half of the wheat grown in Europe. Farmers add imported soy bean to increase the protein levels.

Ensus processes wheat, creating not just bioethanol to fuel cars but a protein-rich byproduct – they prefer the word ’co-product‘ to describe the ’Dried Distillers Grains with Solubles‘ that also comes out of the plant. This co-product can then feed cattle and in this way processed wheat can reduce imports of both soya and oil.

Is it really economically and environmentally sustainable to turn wheat into biofuels? Margetts would not expect anyone to take his word for it on the environment front. Like other biofuels businesses, Ensus has commissioned an independent study of its sustainability.

The Ensus facility is “quite a brave venture,” says Margetts. Going to such a scale from a standing start, he adds, was no mean feat. When finished early next year, the plant will take in 1.2 million tonnes of wheat each year, producing 400 million litres of bioalcohol, enough to meet about a third of the UK’s anticipated current demand.

That first plant is just the beginning, says Margetts. They even call it Ensus One.

Ensus is not Margetts’s only foray into renewable energy. He is also a Non-Executive Director of another young company, Falck Renewables, which is “creating a portfolio of wind energy projects across Europe”. In addition, his interest in sustainable energy goes beyond the corporate boardroom – he also chairs the Energy Technologies Institute, which formally opened for business last December. This coming together of government and the corporate world hopes to put the UK “at the cutting edge of science and engineering” as Gordon Brown, the Chancellor of the Exchequer, put it in his budget statement in 2006.

Margetts may be keen to reverse some of the decline in ’big plant‘ technology through such ventures as Ensus, but this does not mean that he expects anyone to reverse the tide of decline in “big engineering” in the UK.

For example, he says, “I have worked quite hard trying to get people (and especially Government), to recognise that we need to change the definition of R&D. You have to try to create favourable environments for people to commit money today on innovation that will create enterprise tomorrow. R&D, conventionally defined, is very limiting. There is a whole spread of other innovatory work, particularly in the service sector.”

For evidence of poor definitions, look no further than the annual ‘R&D Scoreboard’ of corporate research spending in the UK. On first look this appears a disaster area, with falling spending. However that is only because of the decline in the UK’s manufacturing industry. Until recently, the numbers in the scoreboard did not reflect what goes into innovation elsewhere. “We are actually gaining a wide breadth of creative and innovative service industries. It looks very different if you don’t use the words R&D and instead you use the words development and innovation, or a broader definition of technology.”

For Margetts, R&D is about “advancing fundamental knowledge to create enterprise”. This is something that can go on just as much in service companies or in the finance sector as in things that we traditionally think of as engineering. Engineers can play just as important a role in these areas, by bringing their way of thinking to their challenges.

All this adds up to great opportunities for engineers. “The opportunities may be physical, like Ensus, or they may be virtual, in terms of designing new ways of tackling issues. This is a ‘Big System’ problem. You can’t nibble at one bit of it, to create biofuels, without thinking about the impact on food and land.”

Indeed, the same message seems to apply to just about anything that needs sorting out, not least the fate of the planet. Now that is one particular challenge that really does need teamwork.

Education Rob Margetts was born in London in 1946 and educated at Highgate School and the University of Cambridge, where he obtained a degree in Chemical Engineering.