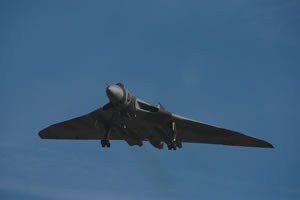 Lift off for the world's last Vulcan

A project to restore the world’s only airworthy Vulcan bomber is nearing completion, after three years of intense work to bring it back to full flight capability. Decommissioned in 1993 after a career spanning more than three decades in the RAF, Vulcan XH558 came to rest at Bruntingthorpe Airfield in Leicestershire.

Since 2005, the ‘Vulcan to the Sky’ project has put the aircraft through an intense and major servicing programme supported by 30 engineers, costing more than £6 million – including a £2.7million grant from the Heritage Lottery Fund. The project’s first milestone came on 18 October 2007, when the former V-force bomber took off from Bruntingthorpe after extensive rectification saw over 130 procedures completed. Amongst the other checks was a refurbishment of flying controls, new piping for the pneumatic and hydraulics systems, the deletion of redundant navigational and bombing aids and a total overhaul of all the aircraft’s wiring. Various other systems such as the alternators, fuel tank pressurisations, and engine air systems were also tested and adjusted and four new Rolls-Royce engines fitted.

One of the reasons driving the restoration is the desire to ‘Honour the Past and Inspire the Future’. The project has designed an inspirational educational programme for children of all ages, with curriculum-linked sessions offering a fun and interactive approach to learning. The scheme was officially launched at National Science and Engineering Week in March 2008 and Key Stage 1 and 2 sessions have been successfully piloted for local schools.

Once the final test flight has been completed, the Civil Aviation Authority should grant the Vulcan a Permit to Fly, which will open up the door for the aircraft to entertain and educate crowds at airshows all around the UK this summer.

Donations are welcome and may be sent to VTST, Bruntingthorpe Airfield, Lutterworth, Leicestershire, LE17 5QS, or by phone on 0116 247 8145. 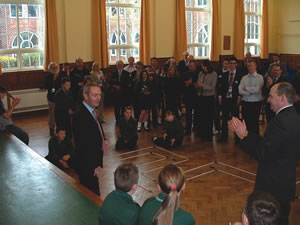 John Hutton, MP for Barrow and Secretary of State for Business, Enterprise and Regulatory Reform launching the project in April 2008

The Academy, in partnership with local partners in northern England and with support from BP and BAE Systems, is to oversee a new ‘Local Engineering Project’ to inspire young people to remain living in the area and consider engineering as a career.

Consultation between the Academy and the North West Regional Development Agency resulted in Barrow being the first place in the UK to be targeted after figures were released showing that between 1991 and 2001 there was fall of 35% in the number of 18-30 year olds who stayed in the area; a figure double the national average.

The aim is to stem this loss of young people, instead encouraging them to become part of the increasingly buoyant manufacturing industry in Cumbria. Six schools and two sixth form colleges have expressed an interest in taking part in the Project which will make use of existing Academy programmes such as the Best Programme. Component schemes of the Best Programme, such as Young Engineers and the Engineering Education Scheme (England), will work alongside others including the University of Cumbria. Coordination of the project will be carried out by local project leader, Ed Elvish, Projects Manager for the Academy, Lynda Mann and staff at the participating schools, and it is hoped that about 10% of each school year-group will be involved.

The Project will promote and facilitate a number of ways into engineering; through apprenticeships, college and undergraduate learning and thereby increase local employment within engineering and technology. Working to a proposed five-year plan, funding of £100,000 has already been secured, so the first two years are guaranteed. Along with the Academy, local partners include Barrow Borough Council, Cumbria Local Authority and the Cumbria Aimhigher project. 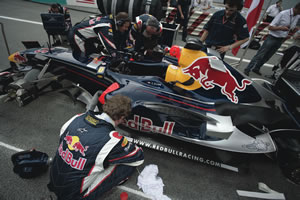 The Sainsbury Management Fellows’ (SMF) Society is offering bursaries to outstanding engineers who want to study for a Masters in Business Administration (MBA) at a top UK or international business school.

Set up by Lord Sainsbury in 1987 and administered by The Royal Academy of Engineering, the scholarships are awarded to up to 14 outstanding young engineers each year. The competitive awards offer individuals with high potential the chance to complement their engineering qualifications with business skills that will open up exciting new opportunities.

Over 250 bursaries have already been funded since the scheme’s inception and many SMFs have gone on to achieve high-level success, either in the boardrooms of Britain’s blue-chip companies, or setting-up their own enterprises.

Dan Mutaditch, President of SMF has said that, "Studying for an MBA at one of the world’s top business schools can cost as much as £50,000. SMF is delighted to be able to assist talented engineers with this huge expense. Bursary winners will join a network of over 250 SMFs, providing excellent contacts and resources which they can draw on in their future careers."

A young engineer awarded an SMF bursary in 2006 is Jonathan Selbie. The Bristol University alumnus completed a degree in Engineering Mathematics in June 2001 and worked for the Red Bull Racing Formula One Team following graduation.

Jonathan, who is currently studying for his MBA at the elite INSEAD Business School in France, said, "My main motivation for studying for an MBA is to learn business skills that will complement my technical qualifications in order to progress my professional career. I hope to make new contacts and friends from the course, as well as meeting the rest of the SMF alumni."

Applications are now open to those with exceptional qualifications who want to study an MBA at a premier international business school.

For information on SMF scholarships and the application process, visit www.smf.org.uk

Rebuilding lives in times of disaster

How one of the leading international relief charities recruits and trains engineers to respond to humanitarian crises across the globe.