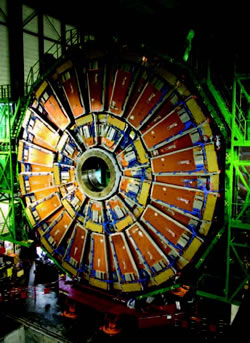 In a tunnel linking man-made caverns 100 m below ground, the Large Hadron Collider (LHC), is being put together with the help of engineers from many different countries and disciplines. The first beam will go into the machine in July 2008, the LHC is the latest and most powerful in a series of particle accelerators located near Geneva, Switzerland. Dr Lyn Evans CBE, the LHC project leader writes of some of the key challenges involved and describes the novel ways through which engineers and scientists plan to unlock a new understanding of the fundamental nature of matter.

For engineers and scientists alike, 2008 is set to become a landmark year – the year in which the world’s biggest scientific apparatus begins to run the world’s boldest experiments. Here at CERN (Conseil Européenne pour la Recherche Nucléaire) in Switzerland, many of our teams have lived with (and lived for) this Large Hadron Collider, or LHC, project since the 1990s.

Today our confidence and expectations are energised not only by the impending power-up of the LHC but also by the fact that success with these experiments is likely to deliver knowledge that could completely reshape our understanding of matter – of our world and our universe.

The aims and ambitions of our scientists have formulated these exciting experiments but it is the inspiration and persistence of our engineers that are providing the reality of the LHC. Few, if any, scientific initiatives have ever posed so many challenges to so broad a range of engineering talents.

Before the science can even start, engineers have had to create the right physical environment for the four prime experiments that are to be empowered by the LHC. This involves recycling the existing 27 km circular tunnel built for a previous major experiment at CERN, some 100 m beneath the Swiss/French border near Geneva, and creating caverns at four points around this ring to house four huge detectors.

Before the 7,000-tonne ATLAS experiment (the largest detector ever constructed for particle physics) could be assembled, an enormous cavern had to be excavated to house the equipment.

The second general detector that will search for new physics is the CMS, or Compact Muon Solenoid, which weighs some 12,500 tonnes and was constructed on the surface before being lowered underground in massive modules to its final position. One cavern had an underground river that had to be frozen using liquid nitrogen before it could be excavated and a concrete structure installed that then held back the water.

The LHC is now being prepared for the day this summer when its initial trials will begin to fine-tune its ability to accelerate two contra-rotating beams of protons (members of the family of particles known as hadrons) to near the speed of light, empowered and guided by superconducting magnets running through eight separate sectors. Each sector must be sealed in a vacuum and cooled by superfluid helium to -271.3 °C, just 1.9 °C above absolute zero – the coldest place not only on the planet but colder, too, than outer space.

These particles are sent in pulses, accelerated in bunches of 100 million every 25 nanoseconds. These bunches meet head-on about 40 million times per second within the four experiments spaced around the LHC circuit. The collisions form smaller particles that spray out in all directions from the collision points.

Each experiment will track and analyse these collisions, searching for unusual events that will shed new light on the fundamental nature of matter. They will produce data from which scientists hope to gain information, that will enable them to analyse the physics of our world more deeply than ever before – and, perhaps, to catch tentative glimpses into entirely new dimensions.

But that is for the future. Today, the engineers who are preparing our four key experiments are experiencing challenging and exciting months while their specific items of equipment are installed and prepared for action after years in the planning, design, development, construction and testing phases.

CERN was established back in 1954 and is still a leading participant among a truly global scientific and engineering workforce. Soon after its establishment, the work at the laboratory went beyond the study of the atomic nucleus into higher-energy physics – an activity which is mainly concerned with the study of interactions between particles. Therefore the laboratory operated by CERN is commonly referred to as the European Laboratory for Particle Physics.

The ATLAS is the largest decector ever constructed for particle physics. Some 1,800 scientists from 165 universities and laboratories in 35 countries have been involved in building and preparing to take data. UK engineers are particularly well-represented in the ATLAS and CMS detectors.

At 45 m long and 25 m high, ATLAS is actually not a single detector but a complex series of sub-detectors, one within another. At its very heart, closest to the beam of particles, is the pixel detector with its 80 million pixels, similar in many ways to the modern digital camera with its eight million pixels (see ‘Capturing Particles’ insert).

ATLAS will focus, among other priorities, on why particles have mass and what the unknown 96% of the universe is made of. In ATLAS and the three other major experiments, engineers have created the tools to achieve these ambitions.

Integrity is our engineers’ watchword. The LHC itself, for instance, links 1,740 magnets that together require some 40,000 leak-tight welds and 65,000 ‘splices’ of superconducting cables to enable them to generate a magnetic field powerful enough to bend and focus the proton beams accelerated to nearly the speed of light. A leak in the cryogenic system that cools the LHC or a fault in an electrical line would mean warming-up an entire sector of the LHC to repair it, an extremely time-consuming process.

A major challenge with ATLAS was to ensure its physical elements are robust enough to withstand the enormous magnetic forces on its superconductor magnets when it is switched on. In the ATLAS barrel toroid magnet, for example, the current of 21,000 amps imposes hundreds of tonnes of force, trying to pull its eight superconducting coils apart. The solution here is to hold the conducting material in place by insulation, kept in compression wherever possible.

During trials engineers cooled the ATLAS barrel toroid to -269°C, the temperature needed to create and maintain a superconducting state. Once the magnet reached full power the current was gradually switched off and magnetic energy of 1.1 gigajoules was dissipated safely, completing a successful test of all the advanced materials involved.

The CMS detector is another exemplar of prolonged and intense engineering effort, culminating recently after eight years of careful work to design, prototype, construct and commission the largest silicon detector ever built. Excellent identification of particles over a very wide momentum range is assured by the use of 73,000 radiation-hard, low-noise microelectronic chips, almost 40,000 analogue optical links and 1,000 power supply units.

Our teams pioneered an automated assembly process for this enormous system, vital for constructing thousands of modules quickly and on schedule. CMS also generated a huge interconnection requirement. Each module was assembled from one or two microstrip sensors, which had to be connected to the readout chip. The solution was intensive use of automatic-wire bonders, which maintained consistent throughput with few delays (see The Compact Muon Solenoid experiment sidepanel).

These engineering masterpieces in miniature will soon witness the re-creation of conditions just after the Big Bang, an environment that will be studied and analysed with unprecedented insight and accuracy. Many possibilities and many theories exist as to what will result from these conditions. Perhaps the only certainty is that the Large Hadron Collider and its experiments will lead us in to a new world of physics, an era in which scientists can describe the workings of the Universe.

The LHC could change our knowledge of dimensions, too. Our world appears to have only three dimensions (up and down, left and right, backwards and forwards) plus one of time. But current theories that attempt to explain the behaviour of sub-atomic particles of matter only work if more than four dimensions exist – as many as 10 or more. Science fiction perhaps, but the LHC offers a real prospect of discovering these dimensions…if they exist.

Will the LHC reveal the unknown? Only time will tell. Our machine, our apparatus and our engineers and scientists will drive knowledge forward as never before, unlocking experimental data that will spur the energies of people who dare to dream.

The author would like to thank John Hutchinson for his help with this article.

Dr Lyn Evans CBE is leader of the Large Hadron Collider project, managing the day-to-day running of a laboratory of 2,500 staff while overseeing the co-ordination between the many worldwide organisations and engineers involved in building and testing elements of the LHC. Dr Evans gained his PhD from the University of Swansea in 1970 and became a research Fellow at CERN in the same year. He went on to play key roles in a succession of projects there before embracing the LHC project in 1994. He is a Fellow of the American Physical Society, a Fellow of the University of Wales and a Commander of the British Empire.