Rebuilding lives in times of disaster 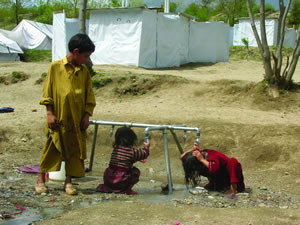 When disaster strikes there is always a demand for skilled, trained engineers and other professionals to react to the immediate humanitarian need. Through an extensive programme of courses and a register of 1,700 experienced members, international relief charity RedR provides training and recruitment for these humanitarian workers. Martin McCann, CEO of RedR, writes about the work of the charity and its members around the globe.

RedR was founded in 1979 by Peter Guthrie OBE FREng (now Professor in Engineering for Sustainable Development at Cambridge) who, following an assignment working in a Malaysian refugee camp for Vietnamese boat people, realised the critical need for engineers in emergency relief.

Since then, RedR and its members have responded to disasters of all kinds, both conflict-related and natural, and have been present at most of the recent major rapid-onset disasters and many of the on-going crises around the world.

The original concept of RedR was to create a register of carefully selected engineers (hence the Register of Engineers for Disaster Relief) who could be called on at short notice to work with front-line relief agencies on secondment from their regular employer. This has since greatly evolved and expanded, encompassing aid workers of all disciplines, into an international organisation that has deployed over 2,500 experts, including engineers, health professionals and logisticians to worldwide relief efforts, and last year trained some 2,722 personnel in 10 different countries.

Since RedR formally became a charity in 1982, the first challenge for its members was to respond to the famines that affected Ethiopia in 1985, followed by addressing the desperate needs of the Kurdish people fleeing into northern Iraq during the first Gulf War. During the 1990s, hundreds of RedR members were deployed to respond to the genocide in Rwanda and the crises in both Bosnia and Kosovo.

Engineers have many of the skills necessary to operate in disaster situations but they need to have the ability to translate their technical skills to a completely different environment, work with limited resources and appreciate the needs of the local communities.

RedR’s training courses help to bridge any knowledge gaps that exist by covering important technical aspects of relief work as well as overlapping issues such as cross-cultural management and security. As well as providing training for aid workers in the UK, RedR identified a need to offer its services in areas directly affected by disaster. In 2001, RedR set up its first regional training programme based in the field in Afghanistan. This experience was to prove invaluable when two rapid onset emergencies struck Asia within months of each other – the tsunami in South Asia and the Pakistan earthquake.

The South Asian tsunami which struck on 26 December 2004 was one of the largest natural disasters ever recorded. It was responsible for the deaths of close to 300,000 people in 11 countries, and resulted in millions of people being left homeless. Large numbers of engineers and other professionals were recruited to help with the immediate disaster response and subsequent relief efforts.

RedR member and architect Barbara Alink was out in Sri Lanka within two weeks of the tsunami, and spent two months project-managing the reconstruction of a number of schools and clinics along the whole affected Sri Lankan coastline. She managed a multi-million pound budget and a team of 18 staff, including engineers, finance professionals and administrators. The project involved a considerable amount of direct implementation as well as the establishment of minimum construction standards. By training her own local staff, Barbara was able to pass on knowledge to local contractors for use in the future.

Barbara then flew out to Banda Aceh, Indonesia, for 16 months to help with reconstruction efforts there. The aim of the project she was managing in this devastated region was to build 500 schools. She worked alongside a structural engineer and started by training local contractors, engineers and surveyors to get the skills in place whilst keeping to the new building standards that the country had implemented. Barbara found Indonesia even more challenging than Sri Lanka as the structures built had to take into account the threat of earthquakes.

Sri Lanka was severely affected by the tsunami that killed some 40,000 people on the island and displaced between 400,000 and 500,000 people along the coastline. In February 2005, RedR established a training programme in Sri Lanka, initially to address the huge need for shelter for the thousands whose homes had been destroyed. Construction Engineer Gill Price was recruited through RedR to set up the RedR Sri Lanka programme.

During the three months that Gill spent in Sri Lanka she set up the RedR programme and worked closely with the Sri Lankan government to shape policy on shelter construction. RedR also acted as a bridge between other aid agencies and government officials. Coming from an engineering background, Gill didn’t have much previous experience of training so the whole assignment was a huge learning curve, but she received a lot of support from other RedR members working in the area and the engineering community as a whole.

Delivering the training on the ground, RedR is able to assess local needs, for example security training is now in huge demand due to the renewed internal conflict of the country. Last year RedR ran 58 different courses in Sri Lanka, training a total of 1,153 people.

At the beginning of October 2005, an earthquake devastated the homes and lives of approximately 3.5 million people in Northern Pakistan. RedR immediately recruited some 40 relief workers, including a large number of shelter, water and sanitation engineers, and public health and engineering coordinators – alongside health workers, logisticians and programme managers – to assist with relief efforts.

Following the earthquake, RedR also worked quickly to set up a programme in Pakistan which provided high quality training for all organisations involved with the relief process. Over eight months, the RedR team ran 130 training events for 2,152 participants in five different geographical areas, ensuring that frontline staff could benefit from RedR’s expertise and courses were held where demand was highest.

Mark Buttle, an engineer with Arup and a RedR member since 1998, was sent out to Pakistan as a training consultant and ‘winterisation’ specialist to carry out a rapid learning-needs assessment and deliver training on camp management and other key areas.

Mark said at the time, “Most of the local people involved in the relief effort had excellent practical skills but, of course, had no specific knowledge of how to run a relief effort in such cold conditions. In one camp, drainage ditches had been dug but the excavated earth was causing freezing water to pool in tents. A woman, who had lost several family members in the quake, had stayed up all night bailing water out of her tent and was, not surprisingly, at her wits’ end. In the end the difference between providing effective aid and not, is the application of a few points of engineering and common sense at the right time.”

Much of Mark’s work focused on raising standards and so improving life in the camps for the millions of people living there. This included giving training on camp management and international standards of aid provision, tent suitability, water and sanitation options and how to help people survive the winter.

Many course participants were Pakistani so materials were prepared in both English and Urdu. This also helped to ensure that the knowledge gained through this disaster remained in the area after the international aid workers departed and national staff were then able to go on to train others.

RedR member and engineer, Step Haiselden, spent time on placement in Maira Camp, the largest internally displaced persons’ camp in Pakistan. The camp was based an hour’s drive north of a town called Battagram on the Karakoram Highway which follows the Indus River through the Karakoram mountains and into China. Step worked installing water tanks and organising the building of latrines for some of the 20,000 people living in the camp.

One of the main challenges Step faced on the assignment was to ensure that the engineering solutions were acceptable both technically and culturally, so diplomacy, consultation and collaboration were essential. Aid workers must be aware of the cultural sensitivities surrounding a relief effort; in the area where Step worked, for example, women are not allowed to use latrines if they are too far from their tents or if they are not screened off sufficiently.

Despite the terrible devastation within Pakistan, Step found at a face-to-face level the atmosphere was positive, with people looking forward to spring and the rebuilding work. He also found it immensely satisfying that people appreciated the work of the international relief community.

What was less visible though, was the fact that many people were severely traumatised by the earthquake and some were simply too scared to leave their tents. For people living in regions affected by natural disaster and conflict, the after-effects are a living reality and the need to respond remains long after the media spotlight has gone away.

In an emergency scenario, different types of response are needed. In addition to health and nutrition, two crucial elements in the majority of responses are shelter, and water and sanitation. In both cases engineers play a key role. To highlight the importance of sanitation, the UN has made 2008 the ‘International Year of Sanitation’.

Following on from the Asian tsunami, better coordination and management of disaster response was called for. In reply to this need, the UN introduced a pioneering ‘cluster’ system, based on the key areas crucial to disaster relief such as water supply, sanitation and hygiene (WASH) and shelter. The clusters aim to provide a predictable and more coordinated response to major emergencies. RedR is heavily involved with the WASH cluster, lead by UNICEF, and Water and Sanitation Engineer and RedR staff member Toby Gould is responsible for project-managing the selection and training of these cluster coordinators.

As with all disaster responses, the WASH response involves engineers, health professionals and programme managers working together to provide water supply and latrines. They also ensure that what is provided is what the local communities want and that the communities know how to use them properly. With the support of RedR, engineers and other aid professionals can continue working together, using their skills to help the millions who are affected by conflict, draught, floods, earthquakes and hurricanes each year.

RedR has 27 years’ experience of placing engineers and providing training in emergency situations. Having trained and experienced engineers making the decisions in the very early stages of an emergency means that water and aid workers can be directed to saving people’s lives and relief money is used to its greatest benefit.

Martin McCann has been CEO of RedR for 15 months and has been involved in international development for the last 30 years, ranging from a two year volunteer posting in West Africa to the more recent role of Programme Director and Deputy International Executive Director of Plan International.