Aerospace engineering is changing. Aeroplanes have traditionally been made out of metal – usually alloys of aluminium; now however, engineers are increasingly working with carbon fibre composites. Tim Edwards, a structural engineer at Atkins, describes the making of composite wings and the take-up of them across the aerospace industry. 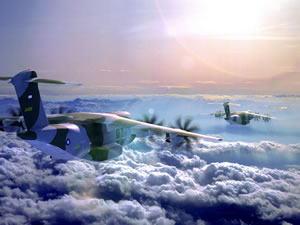 Airbus A400M, the next generation of military airlifter expected to make its first flight later this year, has wings made from carbon fibre composite. By using composites rather than metals the overall strength to weight ratio of materials used in aircraft design can improve by up to 20% © Airbus Military

Fibrous composite materials were originally used in small quantities in military aircraft in the 1960s, and within civil aviation from the 1970s. By the 1980s, composites were being used by civil aircraft manufacturers for a variety of secondary wing and tail components such as rudder
and wing trailing edge panels.

However, it is with the advent of the latest generation of airliners, such as the Airbus A380, the world’s largest passenger aircraft, that these materials have been deployed extensively in primary load-carrying structure. The A380 uses composite materials in its wings, which helps enable a 17% lower fuel use per passenger than comparable aircraft.

Composite materials (for aerospace uses, this is usually a carbon/epoxy mix) can provide a much better strength-to-weight ratio than metals: sometimes by as much as 20% better. The lower weight results in lower fuel consumption and emissions and, because plastic structures need fewer riveted joints, enhanced aerodynamic efficiencies and lower manufacturing costs. The aviation industry was, naturally, attracted by such benefits when composites first made an appearance, but it was the manufacturers of military aircraft who initially seized the opportunity to exploit their use to improve the speed and manoeuvrability of their products.

Civil aircraft manufacturers have been slower to implement them in their airframes for two reasons: stringent civil airworthiness requirements deterred the wholesale adoption of relatively unproven materials and the flat price of fuel in the late 1980s reduced the need for increased fuel efficiency in emerging airliner designs.

Now, however, with extensive experience in the use of composites within the industry, and against the backdrop of European-wide targets to reduce emissions from aircraft, the value of realising the full potential of this important technology is clear.

Carbon fibre reinforced plastic (CFRP) – carbon fibres embedded in an epoxy matrix – derives its high structural performance from the prodigious strength of the individual strands of carbon. By way of comparison, the ultimate strength of aerospace grade aluminium alloys is typically 450 megapascals (MPa – a unit of stress or pressure, one MPa being about 10 times atmospheric pressure), whilst that of a carbon fibre would be five times that value. As carbon composites are, additionally, only 60% of the density of aluminium, the potential for weight reduction in an airframe application is also apparent. Glass, aramid and boron fibres are also used, but for primary load-bearing structure, carbon fibres have the best combination of strength and cost.

In addition to strength and weight, fibrous composites are thought to be virtually immune from ‘fatigue’. Relatively small cracks in metal continue to grow, and it was this phenomenon of progressive cracking that saw the demise of the first de Havilland Comet design during the early jet age in the 1950s. However, because of the structure of composites – they are non-homogeneous – cracks will not be able to spread. This means that structural engineers can perform design and analysis assuming much higher resistance to stress, and concern themselves less with the long term durability of the structures they design.

When applied to aircraft structures, carbon composites are generally supplied in uni-directional (UD) form: thin (~0.125 – 0.25 mm thick) sheets or tapes of parallel fibres that have been pre-impregnated with resin that has yet to set. This form of the material is ideal for the manufacture of thin plates that are used so extensively in airframe structures.

Manufacturers use tape-laying machines to lay down layers, or plies, of this material, one on top of the other, to form single piece sub-components. By laying successive plies in different directions, the strength and stiffness of the component can be tailored to match the demands of the engineer, allowing adequate structural properties to be attained for minimum weight.

Modern tape-laying machines can fabricate an entire wing skin in one piece, eliminating the fasteners that are routinely used in metallic designs and thus saving manufacturing cost and further reducing overall weight. To complete the manufacturing process, the component is cured within an autoclave, which subjects the component to pressure at an elevated temperature to consolidate and harden the layers of plies into a single monolith of carbon/epoxy laminate.

In order to derive maximum benefit from the use of carbon composites, it is essential to direct the fibres in the direction of the main stress. For example, the wing of an aircraft bends during take-off, landing and flight, meaning that it is subject to stress across its span. To support this, engineers orient up to 60% of the fibres along the wing skins and the span-wise internal stiffeners.

In addition, wing skins are subject to parallel stresses known as shear stresses – to combat this, plies are directed at 45°. Components inside the wing, such as spars and ribs that are designed to bear shear stresses, are made of up to 80% of 45° plies. In this way, the direction at which the plies are laid ensures that material volume, and hence weight, is kept to a minimum consistent with adequate strength.

In terms of the impact on the work of structural engineers, that caused by the advent of CFRP has been considerable – they can now effectively choose the stiffness characteristics of the material they are using. Taking this a step further, engineers are also collaborating with aerodynamicists to explore ‘aero-elastic tailoring’. Aircraft wings are designed in the knowledge that their shape impacts on their lift and load distribution, but also that lift and load distribution will alter their shape. By employing aero-elastic tailoring, structures engineers can generate wing designs that deflect under increases in loading in such a way as to moderate the internal load increase. CFRP is peculiarly amenable to this type of design because, by orienting fibres in specific directions, the stiffness characteristics of a laminate can be modified to give precisely the response to increased load that is required.

The foregoing description of carbon composites might lead one to question whether all of this is too good to be true: surely this wonder material must have some Achilles heel?

Indeed, there are several obstacles to achieving the low weight and low cost that the headline figures promise. Engineers are overcoming the difficulties progressively through improved design and novel manufacturing processes, but the current state of development sees engineers of all disciplines searching for the best answers.

Structural engineers are faced with worries regarding damage tolerance and de-lamination, but they must also contend with the less forgiving nature of the new materials when compared with metals.

Metals have the desirable quality that they exhibit plasticity: under high loads they undergo permanent deformation (ie they bend or stretch) before they break. As a result, a metallic structure can absorb everyday small impacts (leading to dents) with very little reduction in its basic strength. Plasticity allows loads in highly stressed regions to be re-distributed to regions of lower stress, ensuring that any stress concentrations inherent in a design do not lead to premature structural failure.

Carbon/epoxy composites, by contrast, exhibit little or no plasticity. Consequently, small in-service impacts tend to create local breakdowns of the epoxy matrix, leading to a weakening of the laminate in the area of the impact. In addition, stress concentrations in a composite design can cause sudden structural failure at high load; the process would be incremental with a similar design in metal because the load would be redistributed.

Structural engineers combat this lack of damage tolerance by assuming much lower stress values than theoretically necessary when they are designing, and they have had to accept an increase in the complexity of their strength calculations to accommodate the greater sensitivity of CFRP at high loads.

Manufacturing engineers are, similarly, wrestling with unfamiliar difficulties. Problems with wrinkling of the fibres in the fabrication process, resulting in a loss of stiffness and strength in the finished component, are addressed only by imposing strict constraints on the geometry of structural features. The spectre of void formation in the resin matrix caused by a lack of consolidation of the plies during the curing process – reminiscent of Swiss cheese – creates further geometric constraints. As a consequence, engineers working with composites have realised that designing with manufacture specifically in mind is equally as important as designing for the strength/weight ratio.

These issues are a small selection from a list that includes topics as diverse as the drilling of holes in the assembly of mixed composite/metallic components to the provision of electrical diverter strips to satisfy lightning strike requirements for the finished airframe. So, the widespread introduction of CFRP must be implemented in an intelligent way.

Following the Airbus lead with its A380, a number of current large aircraft development programmes are looking to use composites more extensively within the wings and fuselage. The Boeing 787 ‘Dreamliner’, for example, may eventually be made of as much as 50% composite materials. This revolutionary aircraft uses a novel process of ‘winding’ composite layers, like the winding of a cotton reel, in the fabrication of large, joint-less, fuselage sections.

Meanwhile the Airbus A400M, the next generation of military airlifter expected to make its first flight later this year, similarly has wings made from carbon fibre composites. This aircraft is designed to withstand the severe loads associated with operations from informal landing strips like deserts and fields, and it benefits from the superior fatigue resistance of carbon composites. The design intent is that A400M aircraft will spend less time in the maintenance hanger and more time flying missions.

Beyond these aircraft, the indications are that the next generation of single-aisle airliners, ubiquitous throughout the world fleet in making 1,000-3,000 nautical mile flights with payloads of 100-180 passengers, will employ carbon composites extensively in their airframe structure.

The environmental case for developing our understanding and increasing our exploitation of composites is compelling. The Stern Review, 2006, identified that 1.6% of global greenhouse gas emissions come from aviation but that the demand for air travel will rise with our income.

To combat the environmental threat that aviation poses, the Advisory Council for Aeronautical Research in Europe in 2002 laid out targets to reduce the emission of CO2(an important greenhouse gas) from an aircraft by 50% by 2020. The reduction of airframe weight through the extensive use of carbon composites is just one of a range of technologies that must be deployed to meet such a challenging target.

To meet the challenge that the widespread use of composite materials throws up, the civil aerospace community in the UK has launched the Next Generation Composite Wing (NGCW) research programme, which seeks to answer some of the questions – see panel above.

The environmental obstacle that confronts the aviation industry is, perhaps, the greatest it has faced in its 100 year history, the adoption of CFRP being one facet of the industry’s plan to surmount it. The NGCW programme should see the UK aerospace industry well placed to be in the vanguard of the intelligent application of these very promising materials.

Tim Edwards is Chief Structural Engineer in the Aerospace division of the engineering consultancy Atkins. The company’s Aerospace division works with clients, including Airbus and Rolls-Royce, on the design and analysis of aircraft structures and aero engines. His composite experience includes work on the carbon composite outer wing box spars for the Airbus A400M, certification of the Airbus A380 and, more recently, research work under the Next Generation Composite Wing programme. He completed an undergraduate apprenticeship with British Aerospace and graduated in aeronautical engineering from Imperial College.