The physicist and engineer Colin Dancer works for the company Data Connection and has helped take them from straight software into next generation telecoms. In parallel he partners the leading contemporary artist Paul Fryer, in creating works that bridge science and the arts. He writes for Ingenia about the results of this fruitful collaboration. 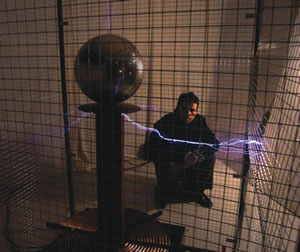 So what’s a practising engineer, who initially trained as a physicist, doing collaborating with a contemporary artist? And why does the resulting work seem to be helping people develop an interest in engineering?

For many people, science and art are two entirely separate worlds, one using the head, the other the heart. Engineering, if people think of it at all, is considered a separate subject; the majority seeing it as mainly about people getting their hands dirty.

As engineers, we know there is a lot more to engineering than metal and oil, but even so, many of us often view science as simply providing us with new materials and tools and art as something you appreciate during your spare time.

However, this is a surprisingly recent point of view. Leonardo da Vinci is probably the best known example of the multi-disciplinary ideal, with his overlapping passions for engineering, art and science leading him to excel in all.

The potential benefits can be seen throughout history, all the way from Venetian artisans using their mastery of materials to produce functional yet elegant creations from glass, to the heights of the Victorian era where new scientific understanding was combined with an artistic appreciation and rapidly developing industrial methods to produce some amazingly effective, yet beautiful engineering marvels.

Bolt from the Blue

Anyway, despite the evident benefits, I must confess that, until three years ago, I was one of those who thought art was something that only ‘artists’ produced, and that it had no role to play in helping people engage with engineering. Then, out of the blue, I got an email from an artist, Paul Fryer, who was trying to make a lightning sculpture using Tesla coils (resonant transformers which allow you to produce millions of volts and writhing arcs several metres long from a normal 13 amp outlet). He’d found from the web that I’d built such coils for a hobby and asked for help.

One thing led to another, and after overcoming a number of engineering challenges (for example, exactly how do you get a million volt arc to go in the direction you want?) the piece of art that resulted, ‘Deus Ex Machina’, was bought by Damien Hirst for £27,000.

The thing which really struck me about ‘Deus Ex Machina’, was the way people reacted when the work went on display. I knew that the physical impact would mean it couldn’t be ignored; the noise, sight and smell of the piece grabbed people at a visceral level.

But more than that, people with no pre-existing bias towards engineering or science suddenly wanted to know everything from the physics behind the piece, through the materials and construction techniques, to the detailed engineering behind elements such as the high speed rotary spark. These questions came from people spanning the whole age range and both sexes. Several even asked for contact details and I know they have started hands-on-work of their own.

Since then, Paul and I have collaborated on a wide range of art/engineering/science works including fusion reactors (sadly not capable of breaking even), red hot, cast iron skulls heated by induction heaters, cosmic ray detectors, rising arcs and giant tuning forks.

My involvement isn’t just as an ‘enabler’ but starts right at the inception of the work.

Sometimes, Paul will have an image or concept in mind and we work together to flesh it out into something which can actually be made. Other times, I’ll have the initial idea, often including a way of achieving it, and working together we’ll sharpen the proto-work into an artistically coherent piece.

Despite our different backgrounds, we have a strongly aligned sense of what is ‘right’, whether that be in terms of how something looks or how it works. Both of us have an almost obsessive appreciation of symmetry and geometric beauty – the ratio of case dimensions has to be just so, bolts have to be aligned in a particular fashion, etc. Similarly, we share a forceful gut instinct for when the design of a mechanism or circuit design is correct and when it still needs work.

Having said that, even with a shared outlook, there is almost always a tension between artistic desire and engineering reality. However, perhaps counterintuitively, this potential conflict is at the very heart of our work together, providing a constructive force that both guides the form of the pieces and also pushes one to explore and extend the boundaries of techniques, materials and technologies.

For instance, for our third joint work, Paul wanted to try and capture the essence of a star. He’d heard about a process called sonoluminescence, where a high powered ultrasonic field is used to create tiny bubbles in a liquid. These bubbles contain small amounts of gas and when surface tension causes the bubbles to collapse, the speculation is that the temperatures reached might be high enough to achieve thermonuclear fusion.

I also knew about the technique, but while I found the concept fascinating, I suspected that it wasn’t going to make for great art – the process is hard to control, the bubbles very small and the amount of light given off is minuscule. Instead I suggested we might be able to produce a work using a process called inertial electrostatic confinement (IEC).

IEC is a technology initially developed during the 1950s by Philo T Farnsworth (the gentleman responsible for the first completely electronic television and the video camera tube) with the aim of providing cheap, clean fusion energy. It achieved the goal of fusion, but except for providing a compact neutron source, was abandoned due to an inability to break even in terms of energy budget.

In its simplest form, two concentric spherical wire ‘grids’, one about a fifth of the radius of the other, are placed in a vacuum vessel. The pressure is reduced to about a millionth of an atmosphere, residual air is replaced by deuterium and the inner grid is made negative to the outer grid by between 10 KV and 100 KV. At a detailed level what happens next is very complex, but at a high level the gas ionizes, the positively charged ions are accelerated towards the inner grid, pass through the holes and form a compressed mass in the middle. The energy gained by the acceleration is equivalent to a temperature of many millions of degrees, and if a collision occurs between two ions the forces are high enough to give the potential of fusion.

I didn’t propose we use deuterium because a work producing a large neutron flux is bad for viewer health, but I felt it had the potential to deliver Paul’s goal of a sculpture encapsulating the essence of a star.

Star in a jar

Paul loved the sound of this approach and went away to do some background research. A little bit later he called me on the phone, raving about an idea involving a suspended 6 ft diameter glass vacuum vessel containing a ball of white hot plasma. I explained that this might be a little tricky to achieve due to minor issues like the massive atmospheric forces on the vacuum vessel, the need for huge pumps and the fact that scaling factors make it increasingly hard to dissipate waste heat. We went backwards and forwards for a bit, but eventually converged on a system, the heart of which was a Pyrex bell jar about 12 inches in diameter.

That, however, was the easy part.

To produce a viable work required us to design and master systems using diverse technologies such as a vacuum pump capable of achieving pressures a few millionths of atmospheric pressure, modulated high voltage power sources at the ten thousand volt level, and computer control systems such that the work could just be plugged in and left to look after itself, despite the wide range of system variables and complex behaviour.

One of the trickiest problems was finding a method for bonding the thin tantalum wires of the inner ‘grid’ (the crisscross of wires round the glowing ball in the middle of the picture) which has to withstand particles at an effective temperature of 10,000,000 K. Spot welding was an obvious candidate, but finding a tool capable of working reliably on the very small scale proved challenging, especially as a complete grid requires 30 near perfect welds and a single over-energetic weld could force one to start again. (In the end we had to build our own welder.)

However, the resulting piece and people’s reaction to it, made all the effort worthwhile. Very different from the lightning sculptures, the slow breathing motion of the star (its formal name is ‘Perpetual Study in Defeat’) and the way its appearance evolves as the pressure changes over time, unfailingly draws people into the work. In fact the first time I got the prototype running I stood and stared at it for over an hour, despite being it being gone midnight.

Furthermore, having reached out to people on an emotional level, when they finally break away, it is often with a desire to understand more about both the engineering and science behind what they have just seen.

So what’s my point?

Am I trying to suggest that we can address the low numbers of engineering graduates or the nation’s general indifference to engineers simply by producing art with an obvious engineering content? No. But in a world where the wonders of modern engineering are (often by design) passing unnoticed inside the latest vehicle or gadget, and where, despite best efforts, modern curricula frequently fail to be relevant and engage, I think there is a role for using art to try and ignite the spark of interest.

I also have to say that I’ve found the creative experience and technical challenge of the work I’ve produced with Paul immensely satisfying.

So if you get contacted by an artist looking for help, don’t dismiss it out of hand…

Colin Dancer is a Cambridge-educated theoretical physicist, practising engineer and Director of Architecture at Data Connection, one of the country’s leading technology companies. His collaborative works with Paul Fryer, have featured in a number of Fryer’s exhibitions, and have been exhibited in the UK, Europe and the US. Particular interests include high-voltage electricity, nuclear fusion and bridging the artificial divide separating engineering and science from the arts and humanities.