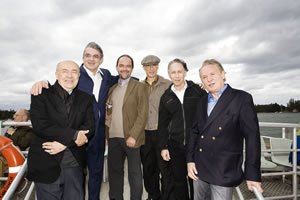 Professor Robert Langer has followed in the footsteps of the inventors of LED lights and the World Wide Web to win the 2008 Millennium Technology Prize. Awarded by Technology Academy Finland, this biennial prize gives recognition to those whose work has helped provide answers to the challenges of the modern world, promoting both the quality of human life and sustainable development.

From the world’s largest biomedical engineering laboratory at MIT (Massachusetts Institute of Technology), Professor Langer’s research and innovation in developing biomaterials for controlled drug release has had a significant impact on fighting cancer and many forms of disease. He has also led pioneering work advancing the use of tissue engineering in medicine, for example with the synthetic replacement of biological tissues such as artificial skin. In excess of 100 million people benefit from these developments every year and this is certain to grow as, in the words of Professor Langer, “tissue engineering holds the promise of creating virtually any new tissue or organ.”

Professor Langer was one of six people, representing four different innovations, who were shortlisted as the 2008 Laureates. Sir Alec Jeffreys was nominated in recognition of his work developing a DNA fingerprinting technique that has helped revolutionise both forensic science and the methods applied to definining family relationships. Alongside Sir Alec at the Helsinki award ceremony was Dr Andrew Viterbi. He was shortlisted for his work on the Viterbi algorithm, an innovation that is now used to avoid errors in wireless communication systems and devices such as mobile phones.

The final innovation to be shortlisted was the erbium-doped fibre amplifier (EDFA). This has been developed by Academy Fellow Professor David Payne CBE, Professor Emmanuel Desuvire and Dr Randy Giles and their work has enabled global optical fibre networks to increase capacity, thereby improving the capability of telephone and internet communication signals.

As the winner of the 2008 Prize Professor Langer received €800,000 and joined Shuji Nakamura and Sir Tim Berners-Lee FREng as winners of the award. The other Laureates all received €115,000 and proved that technological innovation across the globe continues to find answers to many of the issues facing society today.

Edward Cullinan Architects, Ramboll-Whitbybird and Element Energy teamed up to design and build the ‘Cullinan Bird’, an entry in the 2008 London Flugtag held in Hyde Park, London in June 2008. This annual event invites teams to construct piloted gliders and test their flying capabilities over the Serpentine in front of 80,000 spectators. The Cullinan Bird registered a distance of 39.5 m which was comfortably the furthest of the day.

In coming up with a suitable design, aerodynamic problems had to be overcome. The most crucial were the need to have a stable glider (the pilot would only have a few seconds of flying time and complex controls would not be feasible); the importance of minimising induced drag – the competition rules limit wingspan to 9 m meaning that the resulting induced drag and tip vortex losses significantly reduce the performance of Flugtag gliders; and the necessity to minimise surface drag.

Shane Slater from Element Energy used his aeronautical background to develop an excel-based simulation, requiring limited inputs such as weight, wing area, launch speed and height, which showed why most other attempts fail: their wing area is too small. The finalised design was a flying wing. A deep section MH78 airfoil was used which had reflexed camber to aid stability. To combat induced drag and tip losses, the glider was designed to fly ’in ground effect‘ and had wing tip fences to limit loss of lift.

Buildability was a major concern for such a large object. The team decided on a spar and rib structure, covered with non-structural ripstop nylon. Ramboll Whitbybird created a 3D model of the structure, which Corek used as an accurate template to cut the Styrofoam structure. Structural calculations showed that a thin aluminium strip was required above and below the main spar to provide sufficient strength.

The Cullinan Bird glided to a record 39.5 m, more than twice that of the nearest rivals on the day, and the third longest Flugtag flight in history. The glider was recovered in one piece, and once it had dried out it was ready to fly again. Finally it suffered the fate of all Flugtag gliders, and was broken up. 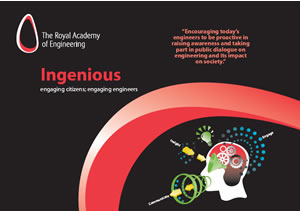 The Royal Academy of Engineering recently announced a unique new Fellowship scheme. The Public Engagement Fellowship programme will support and foster a new generation of engineers that have excellent communication skills, understand the societal implications of engineering, and proactively take part in dialogue with the public and policy makers.

The UK is experiencing a time of rapid technological advancement, driven by engineering and engineers. One of the goals of engineering is to improve the health and wealth of society by creating practical solutions to problems and by providing opportunities for development.

Yet the fruits of engineering can have profound implications that need to be discussed by wider society. For example, the positives of surveillance technology for crime prevention and detection, need to be balanced with the rights of citizens to privacy and personal freedom. The technologies for the mitigation and adaptation to climate change will also find their implementation difficult unless accepted by society.

The Academy’s Public Engagement Fellowships will provide time for selected engineers to: explore the implications of engineering for society; talk to and listen to people’s aspirations and concerns; and to gain knowledge and skills in engaging with the public, and the public policy process.

These part-time or full-time Fellowships are open to excellent early to mid-career stage engineers from academia or industry. The awards will cover salary costs, training course or conference fees and associated travel and subsistence expenses. Each Fellowship engineer will be supported by a mentor.