Taking five minutes to squeeze into, and with a widespread belief among swimmers competing in the Beijing Olympics that they had to wear the figure-hugging swimsuit or fail, Ingenia took a look behind the engineering and manufacture of the Speedo LZR Racer. 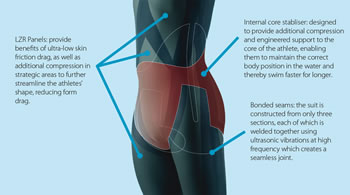 Quick off the blocks

Launched in February this year, the technologically advanced swimsuit had been worn by swimmers breaking nearly 50 world records before the Beijing Olympics had even started. The development of the suit began in 2005 when Aqualab (the R&D arm of Speedo) began looking at how the use of new materials could enhance their Fastskin swimwear. Through materials testing and computational fluid dynamics, the Aqualab team identified the need to place new low-drag panels at strategic points in the full-body suit as a means of reducing drag in the water and thus increasing speed.

Aqualab joined up with NASA to test nearly 60 different materials in one of the most advanced wind tunnels in the world. Each sample was tested at 28 m/sec in order to simulate a swimmer moving through the water at 2 m/sec. These tests proved productive and a low-drag, water-repellant polyurethane membrane was selected as the material of choice.

Alongside extensive testing in the wind tunnel, Aqualab also employed computational fluid dynamics experts at the University of Nottingham and at ANSYS to identify the areas of the body which experience the most hydrodynamic drag. They concentrated on friction and form drag (looking at the flow of water around the body) when the swimmer is in a ‘passive’ position, in other words when a swimmer is at their most streamlined, for example at the start of the race or after a turn.

The innovation didn’t stop there. Indeed, both the main woven-base of the suit and the new panels were manufactured to have a far higher compressive force than standard swimsuit fabrics. In tensile tests, the new panels required 7 kg of force to stretch, compared to just 100-200 grams for everyday lycra suits. This means that the new suit compresses the swimmer’s body into the most streamlined position possible, without compromising their movement.

Aqualab also enlisted the help of Otago University in New Zealand, home of the world’s leading facility for swimsuit flume testing. In testing it was found that the new swimwear offered a 5% reduction in passive drag compared to the Fastskin FS-Pro suit of 2007, a 10% reduction in comparison to the Fastskin FSII suit of 2004 and, in order to put it into context for most non-elite swimmers, it was found to have 38% less skin friction drag than standard nylon lycra material.

While these figures may only translate to tenths of a second in the pool, the reduction is hugely significant, if only in the mindset of the competetive swimmer. There are tests being done to see how important the suit is and how much psychological advantage there is, of wearing a suit that world record-holders wear. The combination of both will have had an impact during the Beijing Olympics in and out of the pool.