This year’s gold medal MacRobert Award winner highlights the engineering achievements of a small company in Scotland. Touch Bionics is changing the lives of increasing numbers of people who, through injury or illness, have lost one or both of their hands. Hugh Gill, the company’s Director of Technology, describes how he and his colleagues have overcome substantial technical challenges to create the world’s first fully commercially-available articulating bionic hand – the i-LIMB Hand. 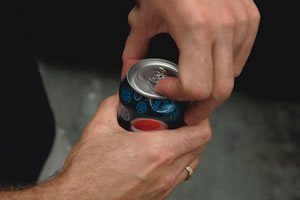 John German, a 40-year-old medical device salesman, opens a can with the help of his Touch Bionics i-Limb Hand

Since we began production of the i-LIMB Hand less than a year ago we have supplied it to more than 350 people, enhancing more than 350 lives. Our team has created an artificial hand that, for the first time, provides individually powered digits that allow a patient to hold a mug of tea, for example, or pick up a pen, or hold a key to turn it in a lock, or undertake countless other simple but frustrating tasks during a person’s daily life.

This achievement can be traced back more than four decades to a research programme at Edinburgh’s Princess Margaret Rose Orthapeadic Hospital, initiated to help children affected by the drug Thalidomide during their mother’s pregnancy. Four
years later, a call by the UK’s National Health Service for an improved design of robotic arm focused researchers’ attention still further.

Some of the people who started our company, Touch Bionics, have created many different bionic (linked by power of thought) limbs during the past 20 years and more. One of our founders, David Gow, developed an experimental arm driven by a worm and drive system, a clear forerunner of the miniature drive units in today’s i-LIMB Hand. Together their work has proved crucial in helping to identify and develop the highly specialised technologies critical to the creation of a practical, everyday use, real-world artificial hand.

For the engineers of the 1980s, let alone of the 1960s, the task of creating a bionic hand of this complexity – within the obvious size constraints of the human hand – would have been an impossible task. Available technology was neither small nor powerful enough to build fully-packaged digits as self-contained, individually-powered entities.

At an early stage in the development of the i-LIMB Hand our researchers and engineers put a lot of work into studying anthropometric data, determining the extent to which we could stretch the proportions of the digits and the hand itself. These data, combined with our modular design concept – which specified each digit to be a self-contained module, to ensure quick and easy servicing and repair – gave us a clear idea of the direction in which we needed to head.

Developing systems for gearing the digits proved an exceptionally tough challenge. We built and dismissed several prototypes along our pathway from an early design, in which all four fingers moved as a single unit powered by one motor, to our current hand, in which each digit has its own mini gearbox.

The problem with most types of gearing (spur or helical, for example) is that when the drive force is removed the gears become free to move in the reverse direction unless a ratchet or braking system is introduced. However, we knew that if we configured a worm and wheel gearing system correctly, this ‘backdrive’ problem would not arise.

By avoiding backdrive, if the wearer closes the hand around an object – a bell-rope, for example – and switches off the hand, ideal grip will be maintained, thus saving on power consumption and extending battery life..

Our next challenge was to squeeze this gear configuration and its power system into the realms of the anthropometric data. We found that the key to driving the individual digits is a small-barrelled DC motor contained in each finger. We found a supplier who could manufacture a miniature motor within our required diameter of around 10mm. But at first the motor proved to have too much speed and not enough torque.

By experimenting with the ratios of the worm to wormwheel we found a suitable compromise between two conflicting requirements – everyone wants their fingers to move both quickly and powerfully. We then designed the body of the gearbox, trimming as much fat as possible from its housing to minimise its size. In practice, the plastic fingers fit onto or around the gearbox, which does all the hard work and forms the hub of each completed digit.

Connecting up the hand

The i-LIMB Hand is a myoelectric hand using signals, tiny electric pulses, from voluntarily contracted muscles within the patient’s residual limb. We harness this energy by placing a skin-mounted electrode in an active muscle area on the residual limb. The prosthetist then encourages the patient to think about closing or opening his ‘phantom hand’, triggering muscular movement. The electrode picks up the electric signal and transmits it to our circuit board in the hand, which triggers hand movement.

Earlier-generation myoelectric hands make only one grip posture available to wearers, greatly limiting functionality. They can only be opened or closed. With i-LIMB Hand, however, the user can configure three different and very effective grips simply by rotating the thumb, an action that selects either the power grasp of the hand’s fingers, or a precision grasp of thumb against first and second fingers, or the ‘key grip’ of thumb against first finger – all by the power of thought, with a little help along the way from some extremely smart engineering!

Another major engineering challenge successfully accomplished is the need for patients to grip objects precisely, with just the right degree of force. Signals from the patient’s muscles are processed by software and released to each motor in the hand, controlling their movement. As the motor moves it draws current from a printed circuit board and a detection system causes the motor to stall when, during the cycle of its motion, it comes across an obstruction – the object the wearer wants to grip. In this way we avoid over-running the motor, which would cause heat build-up with the potential for damage to the hand. With this method we also avoid applying too great a force on more delicate objects. Normally motors that require such high-precision handling are fitted with a servo or encoder, but our hand is just too small for that.

Our processor monitors the current draw from each individual motor and if one or more motors hits the stall current value, the processor allows the motor to continue to stall and then cuts its power, maintaining the digit’s grip on an object.

To restart the digit – to increase the grip, for example – the patient only needs to pulse the muscle in the same direction again and the motor restarts. Each digit is monitored individually, allowing free-moving digits to continue until they come up against a solid stop and then stall. This helps the i-LIMB Hand work more like a human hand in the way it applies small forces over large areas of an object.

With practice, dexterity becomes impressive to watch. We have patients who can peel bananas and deal playing-cards really fast.

We offer two types of ‘skin’ for our bionic hand – one vividly giving the appearance of a robot hand, the other very similar to real skin. Our patients in the US, in particular, love the former option.

Skin sounds simple to replicate but in many ways our ‘skin’ proved every bit as challenging as the i-LIMB Hand itself. As happens so often in engineering, our challenge was to find the right compromise between two required yet, in many ways, conflicting ideals.

The skin – effectively the glove on the hand – needs both hardness and elasticity and not many materials display both in abundance. We realised that, to satisfy the hardness requirement, we would gain quite a stiff material, durable and resistant to puncture or ripping, that would also restrict hand movement and greatly reduce gripping power. And to meet elasticity requirements, we would give the hand plenty of grip but its skin could be worn to shreds in hours. Our hands lead a very tough life.

A silicone-based material looked most promising. We tested two different mixes and thicknesses and settled on a 1.5 mm thick skin with low shore hardness. Sharp edges on i-LIMB Hand pre-production models cut the skin from the inside within hours of being on the hand, so we developed changes to various components to remove edges and ridges that would pressure and puncture the skin in use.

Tests showed that the optimised shore hardness glove survived impact and abrasion much better than the lighter, previously selected shore version, but reduced grip forces. This highlighted another problem that we began to encounter – the silicone compound we were using was sticking to the device. Ideally it should slide across the surface, reducing the need for the glove to be so elastic. Through further research and development, today’s gloves now last significantly longer than earlier versions, but we intend to increase their longevity still further. 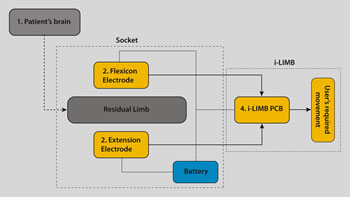 With practice, wearers of the i-LIMB Hand quickly develop the use of our numerous different grip options, enhancing their dexterity and giving them scope for almost all everyday activities. The hand also gives doctors, prosthetists and occupational therapists completely new options for better patient rehabilitation and quality of life.

Our hand is clearly open to many further engineering opportunities to grasp improved functionality in future. The fact that its digits articulate individually means that, once we have successfully refined the process of ‘pattern recognition’, we will make a vital shift closer to the holy grail of prosthetic limbs, the ability to move each single digit both individually, and independently.

The future for prosthetics is in smarter electronic systems that can not only pick up a brain signal, as they do at present, but also distinguish accurately enough between different elements of that signal to recognise the message, for example ‘Point index-finger only’. Through this our patients will gain virtually all the key functions of a real hand. By refining pattern recognition sufficiently, one could replicate the patient’s thoughts and muscle movements by programming the software to react accordingly. This is a difficult engineering challenge, certainly, but the benefits for patients of technology of this type would be extraordinary.

Our team’s engineering expertise means we are constantly fine-tuning the product and refining it still further. It also means we are ideally placed to develop individual fingers and thumbs for patients who have lost one or more of their digits. Our technology has the potential to help a huge number of people worldwide. So our ongoing priority is to achieve a tighter package, reducing the size of components without compromising their power or durability.

Such advances in prosthetic limb capability are a tremendous tribute to all the engineers and scientists who, over the years, have dedicated so much effort and commitment to build the core of knowledge that has helped today’s team at Touch Bionics achieve the world’s first commercial bionic hand. They all deserve that patient’s emotional first handshake that so powerfully symbolises re-energised quality of life.

The author would like to thank John Hutchinson for help in writing this article.

Hugh Gill is Touch Bionics’ Director of Technology and Operations. He has more than 30 years’ experience in high-technology companies in product design and manufacturing. He has been a Programme Manager for Polaroid and Technical and Operations Director for Wideblue. In this role he supported a significant number of high-growth companies to take their technology from concept into development, supply chain and manufacturing. He also has three patents granted and one new patent filed. He won the John Logie Baird Award for Innovation in 2001.