The commercialisation of fuel cells has been a long time coming. In this state-of-play report, science and technology writer Dr Rebecca Pool, in association with Fuel Cell Today, looks to see if today’s technologies can provide the world with its next energy fix. 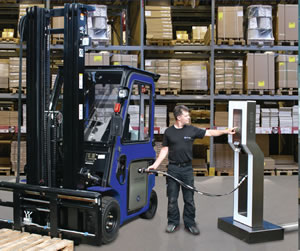 If you believe what you read, we will soon see fuel cells powering our homes, cars and portable devices. The technology could replace the steam turbines in power stations and the internal combustion engine in cars. The days of rushing to finish your work before your laptop runs out of power will also be over; fuel cells will keep your machine operating far longer than any battery could.

But is this just hype? As early as the 1980s, advocates promised us a bright future as the technology was ‘just round the corner’ with large stationary fuel cells that would provide hundreds of megawatts of capacity. Then in the 1990s automotive manufacturers pledged to place thousands of fuel cell vehicles on our roads by 2004. What happened to these initiatives?

Despite setbacks, the future still looks bright for fuel cells. The technology is now entering a new phase of development with an increasing number of applications ready or nearly ready for the marketplace.

Fuel cells are already being used as uninterruptible power supplies in telecommunications networks, power plants and industrial vehicles such as forklift trucks. The technology also provides auxiliary power to a range of leisure vehicles; all major car manufacturers have fuel cell car prototypes on the roads, with commercial fleets slated to hit the streets in the next few years. In addition, you could well be powering your laptop with the same technology very soon too.

Fuel cells generate electricity from an electrochemical reaction in which oxygen and a fuel – nearly always hydrogen – combine to form water. During this reaction, electrons are liberated and transferred through an external circuit, generating an electric current.

All fuel cells are based on a design consisting of two electrodes; a negative anode and positive cathode. These are separated by a solid or liquid electrolyte that carries charged particles between the two electrodes. A catalyst coating, such as platinum, on the electrodes accelerates the chemical reactions that create electricity.

Most fuel cells are fuelled with pure hydrogen gas, which in stationary applications is typically stored next to the fuel cell as a compressed gas. For automotive applications, high pressure tanks are currently under development to allow hydrogen to be stored in tanks small enough to fit in, for example, the boot of your car and still leave plenty of storage space.

Fuel cells can, in fact, be powered by more than just hydrogen. The devices can use hydrogen-rich fuels, such as methanol, natural gas and other hydrocarbons. Unlike pure hydrogen, these fuels have to be passed through catalytic reformers that can extract hydrogen from the fuel ready for use in the cell.

Back to the future

Clearly the technology is already well established, so when did it all start? The fuel cell was invented by William Grove in 1845, although it was not until the space race of the 1960s that innovation really got under way. Sadly, however, the likes of the Apollo and the Gemini spacecraft could only provide a niche market, meaning technology development was limited.

The second phase, arguably marking the true beginning of fuel cell innovation, started in the 1980s. This time, excitement was almost exclusively supported by the military, so yet again very little commercial activity took place. Fast forward to 2008, however, and we see a very different scene.

The overwhelming majority of scientists now agree that our planet is undergoing climate change due to greenhouse gas emissions from power generation, transport, agricultural and industrial processes. As a result, governments worldwide are developing new ways to cut emissions.

Take the recent European Commission energy policy in which greenhouse gas emissions are to be reduced by 20%, by 2020. Under the policy, some member states will have to make serious adjustments to the ways in which they generate energy. As a result, such policies are driving the current development of fuel cells.

To date, six mainstream fuel cell designs exist, four of which are already commercially available. Each is classified according to its electrolyte and works in its own particular way that’s suited to specific applications (table 1).

The phosphoric acid fuel cell (PAFC) is the most commercially developed type of fuel cell and is already powering many commercial premises. The device consists of electrodes made of a finely dispersed platinum catalyst and a silicon carbide structure that holds the phosphoric acid electrolyte. Typical electrical power exceeds 200kW and operating temperatures reach 200°C.

In contrast, polymer electrolyte membrane (PEM) fuel cells – also commercially available – use a polymeric membrane as the electrolyte and have platinum electrodes. The cells can only operate up to 80°C but produce power from just watts to 1MW, and make the best candidates for automotive and stationary power applications.

Direct methanol fuel cells have a very similar structure to the PEM fuel cell with the electrolyte being a polymer membrane. However, a catalyst on the cell’s anode draws hydrogen from liquid methanol, eliminating the need for the fuel reformer. As a result, pure methanol is used as the fuel. These fuel cells are already used as commercially available auxiliary power units, mobile phones and laptops.

Molten carbonate fuel cells (MCFC) have also hit the market place finding use in the distributed generation sector either as combined heat and power (CHP) units or power plants. The electrolyte is a molten carbonate salt and the cell has the potential to be fuelled with coal-derived gases, methane or natural gas. While their 60% efficiencies don’t yet rival the 90% figures of steam turbines, these values can rise to 80% if waste heat is utilised.

In the final stages of development we see solid oxide fuel cells. These are poised to generate electricity and heat in industrial settings as well as provide auxiliary power in vehicles such as the cabs of lorries. They use a solid ceramic electrolyte, such as zirconium oxide stabilised with yttrium oxide, and operate at 800 to 1000°C. Current efficiencies are in the region of 60%.

So as the technology comes of age where can we expect to see it first? While mass market roll-out has yet to take place in any application, don’t be surprised to see a fuel cell operating at your local school, bank, office block or even mobile phone base station. Indeed the Hilton hotel chain is one of the latest businesses to start adopting the technology.

The use of fuel cells to power buildings is, to date, the technology’s most lucrative market, with at least 150 MW of power already installed worldwide. These so-called stationary power units range vastly in power capacity from single kilowatt units to massive megawatt power islands.

On the small side, several 1 kW units have been delivered by Japan-based companies including Matsushita Electric Industrial and Toyota, to power Japanese homes. Thinking big, UTC Power’s 400 kW units are poised to provide 4.8 MW to the new Freedom Tower in New York.

Also in the US the recent Katrina Panel Order, following the devastation caused by Hurricane Katrina in New Orleans in 2005, requires all telecommunication base stations to have 24 hours of back-up power. Fuel cells are to capture some of this new market.

Meanwhile Samsung has developed a PDA that ‘runs on water’. Scheduled for commercial release by 2010, the Japanese electronics business says its fuel cell can produce three watts of electricity with a cartridge that requires refuelling every 20hours. The fuel cell operates by reacting water with a metal to produce the necessary hydrogen to fuel the device.

Crucially, these developments follow the International Civil Aviation Organisation’s ruling that allows fuel cells and a limited number of refuelling cartridges into aircraft cabins. The move over-rules previous regulations that banned passengers from carrying flammable methanol onto aircraft. Also, with the US having since brought equivalent legislation into line with this, industry players are optimistic that fuel cells will soon be powering electronic devices on a commercial scale.

Without a doubt, the most highly anticipated of applications is the fuel cell car, a so-called light duty vehicle. True, the world has been waiting a long time for real results but the coming years promise to deliver.

We can expect to see the major automotive manufacturers launching fleets of vehicles over the next few years. What’s more, thousands of vehicles should debut post-2012 following developments such as the California Zero Emissions Vehicle Mandate.

In fact, latest forecasts indicate that by 2020 more than 1.2 billion vehicles could be in use worldwide. This figure is up 71% compared with today’s vehicle count. However, while the predictions are impressive, the industry still needs to address one crucial issue: re-fuelling. Where are the hydrogen stations?

The Vice-President of US-based General Motors, Larry Burns, recently called for a hydrogen infrastructure to be built in California by the main energy companies. As he outlined, building just 40 hydrogen refuelling stations around the Los Angeles metropolitan area and major highways would mean most of the population would be only 3.5 miles from a ready source of hydrogen.

This infrastructure could support up to 100,000 vehicles and would cost around $160 million, the equivalent of every Californian paying for a Starbucks coffee scone, as Burns pointed out. Additional General Motors research also suggests US consumers will not have to pay significantly more for hydrogen than gasoline in the long-term.

In terms of technology, the PEM fuel cell as used by Honda, General Motors and Volkswagen, dominates as its low operating temperature, good durability and range make it ideal for use in light duty vehicles. .

Meanwhile, hybrid battery-internal combustion engines are already with us and steadily growing in popularity. However, these are considered by some industry players as a short-term option that paves the way to fuel cell cars.

In the longer-term, the only real competition for the fuel cell is a plug-in battery for electric cars. While these undoubtedly have a role to play in city driving, they currently suffer from range and durability problems; for long range driving, fuel cells are currently the only option.

In May 2008, the US Department of Energy (DoE) assigned a further $130million to fuel cell development for automotive, stationary and portable power applications. As principal deputy assistant secretary for the DoE’s office of energy efficiency and renewable energy John Mizroch said: “[This] investment will move us closer toward our goal of clean, reliable, durable, and cost-competitive fuel cell technology. Hydrogen fuel cell research and development is a critical component of our comprehensive strategy to commercialise and deploy advanced clean, renewable technologies.”

So be it to cut carbon emissions or boost energy security, governments worldwide are keen to adopt more environmentally friendly technologies. This political change, coupled with improvements in technology, can only ensure fuel cells become more common place over the next decade.

Rebecca Pool is a science and technology writer with a background in materials science. She is an experienced editor and journalist, and reports on a large range of subjects from energy and transport to semiconductors and telecommunications.