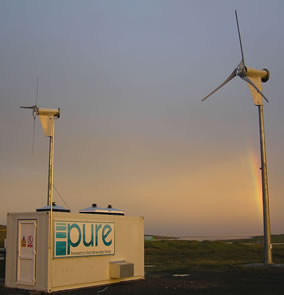 HyPOD at the Pure Energy Centre.

Shetland moves towards a hydrogen dream

The Shetland Isles are on the brink of an energy breakthrough. Local engineers have developed a groundbreaking hydrogen power scheme that allows wind-generated electricity to convert water into hydrogen and enable Shetland to become home to the world’s first hydrogen economy.

Set on the Isle of Unst, PURE (Promoting Unst Renewable Energy) is the world’s first community-owned renewable hydrogen system. The scheme consists of two 15kW wind turbines, a hydrogen subsystem for generating and storing the gas, and a fuel cell.

The turbines provide heat and power to five business units in a remote industrial estate as well as driving the all-important hydrogen electrolyser, dubbed ‘HyPOD’, which splits water into hydrogen and oxygen. The hydrogen, stored in cylinders, fuels a converted G-Wiz car as well as a 5kW fuel cell that provides a back-up supply of electricity for essential services.

The Shetland island of Unst has among the highest fuel prices in the UK, with more than half the islanders spending over 20% of their income on energy. The system demonstrates that a small community-owned renewable hydrogen system can provide an alternative energy infrastructure to those based on oil, gas, coal and nuclear power. Indeed, HyPOD is currently being used as the basis for several hydrogen projects around Britain which are being developed by the Pure Energy Centre, a company which was set up on the back of the PURE Project.

The International Energy Agency has commented: “The successful integration of wind and hydrogen technology into a working system is something that many large businesses are still struggling to make a reality, yet the community of Unst has already done it.” 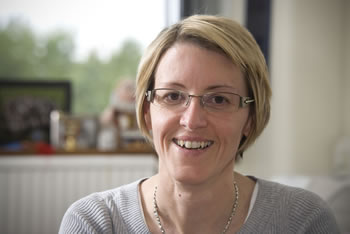 Anne Neville of the School of Mechanical Engineering at the University of Leeds.

Anne Neville of the School of Mechanical Engineering at the University of Leeds has been awarded a 10-year research chair in emerging technologies – the first of its kind to be given by The Royal Academy of Engineering. Professor Neville will focus on examining engineering problems relating to her core research areas of corrosion
and lubrication.

This Academy Chair, worth £1.3 million over 10 years, will be focused on ‘bioinspiration’ in the area of interface and surface engineering, where Professor Neville has built a reputation. She has noted how the technology transfer from biology into engineering has enormous potential and that there is currently a lot of work being done in mimicking natural surfaces for engineering applications.

Much of this work has been towards replicating surface topographies across different length scales and also combining different length scales on one surface. The most well-documented are the Lotus Leaf as a self-cleaning surface; the Gecko to achieve effective adhesion; Motheye for anti-reflection; and Sharkskin for low drag. This proposal will specifically address the ability of surfaces to regenerate, self-heal or respond to the environment – surface activity is at the core of the research.

Professor Neville feels that bioinspiration as a research field can inspire budding engineers. She intends to use this Chair to learn about how nature solves problems of repairing damage, adapting to extreme environments and defending against predators. The research can potentially be used to design engineering systems for a range of application areas including motorsport, oil and gas recovery and medical devices.

She also plans to spend some of her time as an ambassador for engineering, encouraging youngsters to consider the subject as a career. When the award was announced in Septmeber 2008, Professor Neville said “In the UK, the perception of engineering can often be one of dirty overalls and car engines - hopefully this chair will help to portray it in a slightly different light”. 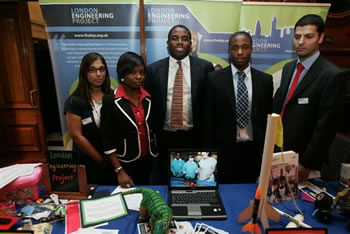 At the launch of the Strategically Important and Vulnerable Subjects report on 28 October 2008, David Lammy (centre), the Minister of State for Higher Education and Intellectual Property, met with some of the London Engineering Project fieldworkers and ambassadors.

The results of an interim review of a £350 million funding programme to support vulnerable subjects led by the Higher Education Funding Council (HEFCE) has found that, after years of decline, the number of undergraduates in physics, chemistry, maths, and other subjects is rising again. While this reversal cannot solely be attributed to the work of HEFCE, it is evidence that the contribution has had definite positive effects.

Research into the state of science, technology, engineering and maths (STEM) education in the UK prior to 2005 had revealed a steady decline in pupils undertaking STEM subjects. As a result, industry voiced concerns that too few STEM graduates were being produced to satisfy demand, which in turn had led Government to fear for the future of the UK’s economic competitiveness.

In response to this HEFCE pursued a six-year programme of extensive investment in STEM subjects, with millions of pounds used to support the high-cost and vulnerable sciences at school, university and professional levels. While the programme is at the halfway point, the results so far are encouraging. UCAS statistics show that maths acceptances at UK universities have risen by 7.1% for 2008-09 compared to 2007-08, while chemistry is up 4.6% and physics 1.4% over the same period.

In most disciplines of engineering, there have been even larger rises during the same period, most notably in civil engineering. At school level, the number of pupils who decided to undertake maths at A-Level in 2008 increased by 7.1% since the same time in 2007 and those taking further maths increased by 11.1%.

In October the Chief Executive of HEFCE, Professor David Eastwood, said of the programme that, although it was early days, the programme was beginning to bear fruit. He also said that HEFCE was now looking to use the lessons learnt from the pilot initiatives (including The Royal Academy of Engineering’s London Engineering Project) in STEM subjects set up with the funding to create one general programme which “Will raise still further the aspirations of young people and people in work”. 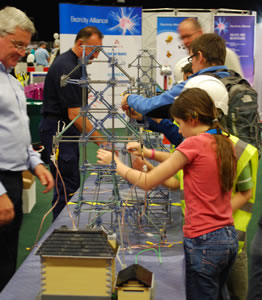 Young engineers in action at the Imagineering Fair.

Over 5,000 visitors from across the Midlands came to the Ricoh Arena in Coventry in September to the Imagineering Fair. A large number were youngsters aged between 8 and 16, who had given up their weekends to immerse themselves in a variety of engineering projects and activities.

The event, sponsored by Jaguar Land Rover, had a programme of stimulating and absorbing activities and challenges dreamed up by the two education-enhancing charities the Imagineering Foundation and Young Engineers, working together with 40 or so engineering organisations. The fair featured virtually every aspect of engineering from building towers to designing racing cars, while embracing the all-important subjects of climate change and saving the planet.

Each year the organisers invite a number of people, who have carved out highly successful careers in the engineering sector, to come along as role models and to talk about what inspired them and started their careers. As one previous young female participant declared, “I was so fired up by my Imagineering experience that I immersed myself in engineering and consequently am now about to read it at Jesus College, Cambridge”.

The value of such motivational hands-on experience was further demonstrated when Young Engineers conducted an INSET day as part of the London Engineering Project at Bacon’s College in Southwark. Technology teacher Mike Wilcock said, “This was the best and most inspiring INSET in my teaching experience. It connected so many strands of our work here that we now have outlined an engineering programme through each year of the college.”

The Imagineering Foundation organises two other Imagineering Fairs at the Royal Bath and West show at Shepton Mallet and at the Royal International Air Tattoo at RAF Fairford near Cirencester. For further details see www.imagineeringweb.co.uk and www.youngeng.org

The Thursday Daily Telegraph carries a substantial amount of the national advertising for engineering posts. Three times a year, they create a pull-out supplement with stories about industry, innovation, graduates and careers in engineering. The next edition is on
15 January 2009.

To view previous ‘Careers in ‘ Engineering supplements that appear in the Jobs.Telegraph section, go to www.jobs.telegraph.co.uk/careers-insider

Following his Profile piece for Ingenia 36, Peter Head OBE FREng would like to add that “The Second Severn Crossing had brilliant leadership in the public sector from Bill Galagher, Ed Bradley, Andrew Murray and Andrew Hewitt and then during detailed design and construction from Norman Haste OBE FREng and Malcolm Fletcher MBE FREng.”

<b>The smallest television screen in the world</b><br> Engineers have developed a fully functional miniature screen that measures the size of a thumbnail.

Creating protective barriers for allied forces in Afghanistan and Iraq