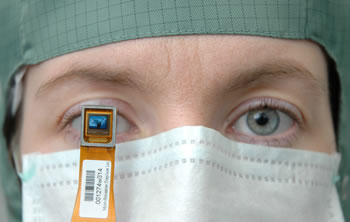 Personal video glasses, a device long-imagined in science fiction and sought after by technophiles, may finally have become a commercial reality after breakthroughs by a team of engineers at MicroEmissive Displays (MED) in Edinburgh. Just 4.8mm by 3.6mm in size and with ultra-low power consumption, MED’s miniature displays are now being marketed in head-mounted ‘personal viewers’.

Named eyescreen®, this microdisplay is the world’s first emissive Polymer Organic Light Emitting Diode (P-OLED) microdisplay. Viewed through magnifying optics, the display produces a large full-colour image that appears to the eye as the dimensional equivalent of a picture on a TV screen. Image quality is comparable to LCD televisions and monitors, with no pixelation or distortion.

Video glasses (also known as ‘personal viewers’) head-mounted displays and electronic viewfinders in cameras and camcorders are all potential applications. The innovation has a major advantage over more conventional TV-on-the-move devices such as screen-equipped mobile phones: it has ultra-low power consumption.

The P-OLED technology requires no backlight, which does away with power-hungry backlight electronics. Users who plug their eyescreen®-equipped video glasses into an MP4 player, a video iPod, a portable DVD player, or a TV-capable mobile phone, will gain much longer battery life. Typical power consumption by eyescreen® is just 25 to 50mW (a back-lit display in a camcorder might use 300 to 400mW).

TV on the move

Ultra-high contrast is ensured by the non-emissive black of the screen, which allows truer colours and provides outstanding near-to-eye video image quality that is free from flicker. Dr Chris Yates, Chief Scientist at MED, outlines some of the major challenges engineers have overcome.

“We have avoided the problem of differential colour degradation of organic LED (OLED) materials by using a white polymer OLED with colour filters to ensure a consistent colour gamut.

“Another challenge was that the individual layers that form the OLED stack each contain very thin layers of their own, down to one-billionth of a metre, so controlling these accurately was paramount to ensure uniform and stable manufacture of microdisplays. We use advanced metrology at our volume manufacturing centre in Dresden to maintain control of the process.

“Displays are very sensitive to defects during production and customers expect a defect-free, uniform display. So a state of the art clean-room with a custom-designed toolset and rigorous manufacturing procedures allows us to manufacture the microdisplay in high yields. We also implemented a custom-built, automated product test line that enables 100% testing of displays in high volume manufacture.”

The small size and high image quality of eyescreen® have resulted in the technology being used to manufacture head-mounted personal viewers for sale in the USA, Asia-Pacific and Europe. The viewers will be used for mobile phone TV and video on the move, as well as other sporting, industrial and leisure activities.

Creating protective barriers for allied forces in Afghanistan and Iraq

The Mayor of London on the role engineers and engineering have in improving London’s infrastructure.

Advances in the use of silicon semiconductor technology to replace and monitor biological functions and other research being conducted by the Institute of Biomedical Engineering.