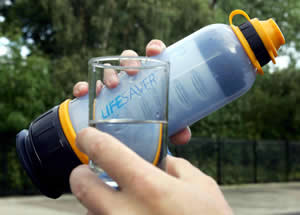 WATER BOTTLE IS A LIFE-SAVER

One of the first things to fail in the event of a natural disaster is the supply of clean water when efforts by aid agencies can take weeks to reach those on the ground. The Ipswich company, LIFESAVER Systems, has developed a bottle that can produce clean drinking water from almost any source by filtering out even microscopic viruses; providing an average-sized family with clean water for up to 16 months.

Launched in 2007, LIFESAVER is an all-in-one ultra-filtration water bottle. Based on industrial filtration technologies, it is able to filter contaminants from water down to the 15 nanometre level, which includes bacteria, viruses, parasites, and fungal spores. Other similar products only filtrate down to 200 nanometres.

The LIFESAVER bottle was developed by inventor Michael Pritchard when he saw news reports of the Asian Tsunami and Hurricane Katrina. Fresh water was scarce in those regions and massive flooding made it difficult for large-scale emergency relief to get to survivors quickly.

Michael Pritchard realised that transporting thousands of litres of water into a disaster area would only provide enough clean water for a few days. What was needed, he felt, was a simple and safe method of providing disaster victims with the means to produce and carry their own source of clean water without the need for boiling or chemicals such as iodine.

“My challenges were to shrink the filtration technology being used by industry into a portable, individual-sized water bottle that did not require power or chemicals but remained simple to use. Not an easy task, but I did it,” explains Michael Pritchard.

Based on industrial-scale chemical engineering, at the core of the LIFESAVER bottle is a cylinder of ultra-filtration hollow fibre membranes, which are aided by a pre-filter disc in the base and an activated carbon filter near the mouthpiece (which reduces a broad spectrum of chemical residues). To clean water for consumption, the user pumps a handle in the base of the bottle to force contaminated water through the ultra-filtration system.

Independent tests at the London School of Hygiene and Tropical Medicine found that water from the LIFESAVER bottle met World Health Organisation standards even where the water source contained massive levels of E. coli and polio. There are two models in production: the basic model bottle can be used to filter up to 4,000 litres of water (the next model up is 6,000 litres) before the membranes need replacing.

To offset the overall cost of a LIFESAVER bottle, its components can be removed and replaced individually as part of a cartridge system. According to LIFESAVER Systems, a single bottle can last many years if it is maintained properly.

The bottle has features that act as failsafes to prevent users drinking contaminated water, such as an auto shut-off mechanism that stops water from being pumped when the membrane has reached the end of its life.

Several thousand LIFESAVER bottles have been sold in a number of countries, including the United States, Eastern Europe, and South America.

The current state-of-play for biofuel use around the world and where the industry could take the technology in the future.

How is the internet really wired?

The first in a series on the engineering behind the internet: how web traffic is enabled by its physical infrastructure.

The winner of this year's Sir Frank Whittle Medal for oustanding contribution to engineering gave a lecture at the Academy's New Year Reception.