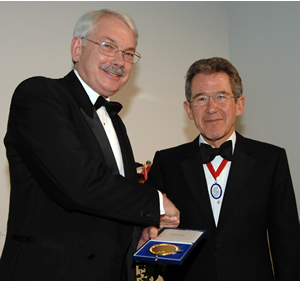 The Royal Academy of Engineering has awarded Peter Head the Sir Frank Whittle Medal for outstanding achievement. A structural engineer and director at Arup, he was recently named by Time magazine as one of 30 global eco-heroes who could potentially save the planet. He gave the New Year Lecture in January 2009 at the Academy’s HQ.

Mankind is now leaving the Industrial Age and entering a new epoch in its history: the Ecological Age, according to Peter Head FREng. Talking to an audience of Fellows and their guests, he outlined the measures needed to combat climate change. He also explained how the world’s economic troubles present opportunities to invest in the planet’s future.

Peter Head recently embarked on a global tour to canvass opinion on climate change, including attending and giving talks at the UN Poznan Climate Summit and the European Investment Bank. He believes now is a good time to ensure investment is made in environmental projects, especially retrofitting buildings to be more energy efficient and creating jobs to help bring us out of the recession – stimulus funding needs to be used to drive the transition forward.

“We are at this amazing moment when all seems lost,” said Peter Head. “But actually there is everything to gain because the public sector is now empowered to actually manage economic investments very well, particularly through the banks.”

He raised the question: “Whether it is possible for 9.5 billion to live sustainably on the planet in 2050? If that is the case, what policies and investments are needed to get us there?”

It will be a significant challenge but there are examples of sound ecological investment models around the world. Peter Head cited the California CalPERS Pension Fund as such an example, which has invested in retrofitting public buildings and has found those investments to be some of the best ever for pension funds. He also mentioned the transformation of single-use building developments into mixed-use in Los Angeles, and pointed out that such investments often carry higher returns on capital.

Peter Head laid out a holistic view of how new approaches to energy use, and urban planning and living, could go a long way to avoiding catastrophe by the end of this century. Designing new buildings to be more energy efficient, increasing urban density, living in more socially responsible ways, and introducing integrated public transport powered by renewable energy, were all measures that would see us make the transition to the Ecological Age.

He defined his vision for the Ecological Age as a world in which carbon dioxide emissions are reduced by half and where every person living on the planet contributes only two tonnes of carbon dioxide (down from around 10 to 25 tonnes per person in middle to high income countries).

To manage the shift, he called on the engineering profession to put itself on a “war footing” and take a leading role in providing the solutions to climate change, including driving government policy as well as creating technological innovations.

Presenting the award, Lord Browne said: “Peter has delivered outstanding and sustained achievement throughout his career and is well deserving of this award for engineering innovations for the environment. Now, more than ever, engineers are tasked with designing the future to combat climate change and to provide sustainable, cost-efficient solutions to safeguard the environment.”

Peter Head leads Arup’s integrated planning arm and is currently heading a team on a project to develop Dongtan, an island off the coast of Shanghai, into the world’s first carbon-neutral city housing half a million people. He is recognised as one of the world’s foremost innovators on environmental planning and construction.

He described the award as the highlight of his career so far, “It is a great honour to win this award. It means a tremendous amount to me,” he said. Peter Head has won numerous awards previously, including the Academy’s Silver Medal in 1995.

See a video recording of this lecture at: www.raeng.org.uk/reception2009

How is the internet really wired?

The first in a series on the engineering behind the internet: how web traffic is enabled by its physical infrastructure.