Futuristic when first conceived in the 1970s, personal rapid transit systems have had many false dawns. But developers at Advanced Systems Transport (ATS) are confident their pod vehicle system, under development for a decade, will soon come of age and become a regular sight at airports and city centres. 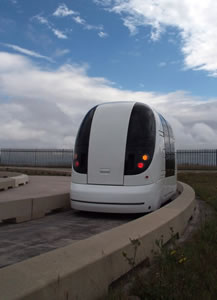 The ULTra vehicle on its Cardiff test track © Frances Cook/ATS

After several years of tests at ATS facilities, Heathrow Terminal 5 will host a pilot project designed to put the ULTra (Urban Light Transport) through its paces with large volumes of passengers. The huge airport is typical of the ‘24/7’ environment in which the ULTra is expected to come into its own, with quick, precise personalised journeys and virtually no waiting time.

Increasingly congested transport systems had long signalled the need for convenient, reliable, inexpensive, easy-to-use public transport when Professor Martin Lowson FREng decided to attack the problem with a clean sheet of paper. He used solid engineering design principles to home in on the solution and matched proven technologies with the latest computer and IT techniques to develop a fully integrated system. The aeronautics department at the University of Bristol started the research and he soon set up Thornbury-based ATS to develop the concept.

The system that emerged uses a fleet of battery-powered vehicles – each carrying up to four passengers and their luggage and capable of speeds up to 25 mph on a dedicated guideway route network, 1.5 metres wide. Stations might be a few hundred metres apart at locations of strong commuter demand.

HOW THE SYSTEM WORKS

Passengers simply go to their nearest station, which has a number of berths at each of which they can use a personal smart card to select a specific destination. This selection is passed to central control, which uses a synchronous system like an aircraft control process to allocate vehicles to slots and tell the vehicle at the berth its destination. The average energy use is 0.59 MJ per passenger km which makes it far more efficient than a car.

Once onboard, the passenger is taken where they want to go, non-stop and by the best available route that bypasses all the intermediate stations. Vehicles are autonomous with no further central control until the journey is over. Precise location is determined by onboard digital mapping backed up by navigation markers read by laser sensors. An independent Automatic Vehicle Protection system, based on a fixed block signalling system as used on railways, prevents vehicles colliding. The fixed blocks are defined by inductive loops set into the track which interact with sensing circuits on the vehicle.

In 2001, ATS built a dedicated test track in Cardiff with a guideway of almost 1 km and incorporating all potential service features – elevated sections, gradients (up to 10%), banked and unbanked curves, merges and diverges, and a station. A research track at Avonmouth was used to develop control software and hardware.

Although initially being tested at an airport, the future interest for these autonomous taxis is for their urban transport potential. They could be used in inner cities, to link bus stops, train stations, supermarkets, and park and rides. These quiet, driverless vehicles have the possibility to become a common urban feature both in the UK and further afield.

The winner and three finalists of the 2009 MacRobert Award, presented at this year’s Academy Awards Dinner.