The Royal Academy of Engineering’s MacRobert Award is the UK’s premier prize for engineering. It is awarded annually for an outstanding innovation, of benefit to the community, which has also achieved commercial success. It seeks to demonstrate the importance of engineering, and the role of engineers and scientists in contributing to national prosperity and international prestige.

Described at its launch as “the Nobel Prize for engineering”, the Award was originally founded by the MacRobert Trusts and first presented in 1969. Every submission is reviewed by a panel of judges drawn from the Academy’s Fellowship and from all areas of engineering. The Award honours the winning company with a gold medal and the team members with a prize of £50,000. Here we showcase the four finalists for the award, starting with this year’s winner, announced at the Academy Awards Dinner on 9 June 2009. 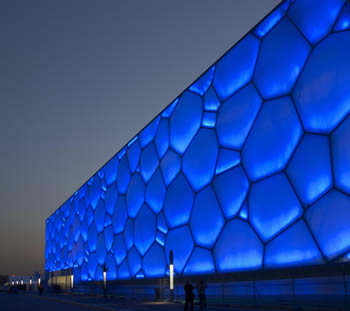 The Water Cube has become a landmark building in Beijing, where it was constructed for the 2008 Olympics © Arup

Built to showcase the swimming events in the 2008 Olympics, the Beijing National Aquatics Centre, affectionately known as the Water Cube, has become one of the most recognisable, as well as energy efficient, buildings in the world.

Unveiled to the billions of viewers watching the 2008 Beijing Olympics, the Water Cube (officially known as the Beijing National Aquatics Centre), with its distinctive soap bubble appearance, is one of the flagship buildings in the regeneration of Beijing, incorporating cutting-edge construction materials and design techniques.

The decision to give the Aquatics Centre a naturalistic appearance was made early on in the project, designed to complement the nearby Bird’s Nest stadium with its bracken-like tangle of criss-crossing beams. It was also decided at an early stage to use ETFE, a transparent Teflon-related material, as cladding because it was lightweight and offered better insulation than single-glazed glass.

The use of EFTE as a material allows the Water Cube to use 30% less energy than comparable buildings, making use of the sun’s rays to heat the swimming pools and using natural air circulation to regulate internal temperatures.

The greatest challenge at the design stage was to find a method to produce a cladding that fitted together in a geometrically efficient manner and, at the same time, remain visually inspiring. After much research, the Arup team settled on a solution that combined 19th century research into the three-dimensional geometry of soap bubbles and a technique to define the most efficient way of dividing a three-dimensional space – Weaire-Phelan foam.

An interesting point about Weaire-Phelan foam is that, despite its uniform structure, when viewed at an arbitrary angle it appears totally random and organic. Using computational algorithms developed specifically for the project and advanced virtual prototyping, the result was a structure formed by interconnecting steel tubes and covered in inflated ETFE cells – of which there were seven different sizes measuring up to 9m across.

Energy efficiency and sustainability are at the heart of the Water Cube’s design. The building essentially acts as a greenhouse; its ETFE cushions let high levels of natural daylight into the building, allowing the use of the sun to passively heat the pool water. Excess heat is stored by the internal surfaces and released at night, keeping temperature loads stable. The transparent ETFE panels also reduce artificial lighting requirements by 55%.

The Water Cube was designed to be a sustainable, lasting legacy for the people of Beijing. Costing a fifth of an equivalent facility in the UK, the Water Cube is the start of a quiet revolution in building design. The use of multi-disciplinary virtual prototyping and a holistic approach to performance optimisation means the construction industry can adopt an off-the-shelf approach and match manufacturing sectors like the automotive industry in terms of cost, quality, and reliability.

Orthomimetics (OM) is working at the leading edge of regenerative medical technology and has developed novel implants for the regenerative repair of bone, cartilage, ligaments and tendons that are commonly damaged during sports injuries and other trauma. By helping surgeons repair damage to these tissues more effectively, OM’s products hold the potential to restore patient mobility, reduce the future risk of osteoarthritis, and delay the need for joint replacement surgery.

Degenerative joint disease is one of the most costly and widespread challenges facing healthcare providers each year. Although total joint replacement can effectively restore mobility and alleviate pain, the clinical reality is that knee and hip prostheses last on average only 17 years. Younger patients sometimes require one, or sometimes multiple revision procedures to repair or replace failed implants.

OM’s innovative implant technology, including its flagship product Chondromimetic, is the product of research collaboration between the University of Cambridge and the Massachusetts Institute of Technology. Based on a technology platform for the production of materials that mimic natural tissue, OM’s novel implants encourage the separate yet simultaneous regeneration of soft tissues (such as cartilage, ligament and tendon) and the bone to which they are anchored.

The implants – which are delivered using minimally invasive, single-step procedures – provide a distinctive off-the-shelf approach to optimise the outcome of current surgical methods for repairing damage to articular joints. By helping surgeons treat damage to cartilage, ligaments and tendons more effectively when it is first observed, these implants hold the potential to prevent or delay the onset of degenerative joint disease.

Chondromimetic has several advantages over competing products for treating small lesions in articular cartilage. Easily inserted using available surgical instruments, it anchors directly to bone and uses natural biomaterials which resorb at rates compatible with new tissue formation. It is supplied in an all-in-one procedure pack, which simplifies implantation and minimises risk of error. Preclinical testing has shown that Chondromimetic produces results superior to those of the leading product for the repair of bone and cartilage.

In December 2008, OM received CE Mark approval for Chondromimetic, identifying that it has met European consumer safety and health requirements, and completing a crucial company objective within budget and ahead of schedule. Receipt of three high-profile grants from the UK Technology Strategy Board totalling over £2 million has allowed further development of a strong range of future products. The recruitment of a world-class medical advisory board has also successfully shaped OM’s pre-clinical and clinical programmes.

The imminent closure of OM’s latest stock offering will allow the company to implement a comprehensive programme to enhance the clinical and commercial profile of Chondromimetic, with an ultimate benefit to a new generation of patients. 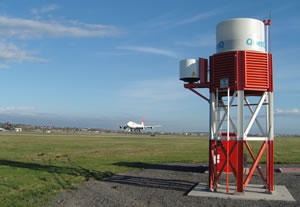 Debris on runways is a critical factor in airport safety and costs operators around $4 billion globally each year in damage to aircraft engines. In response to this problem, technology company QinetiQ has created Tarsier™, a system that revolutionises the way airport operators inspect their runways, leading to improved safety, more efficient operations, and greener airports.

Foreign objects and debris (FOD) left on airport runways pose a significant safety risk, as seen with the loss of a Concorde aircraft in July 2000 after it ran over a piece of metal on take-off from Paris Charles de Gaulle airport. Runways are typically inspected for FOD by eye from a moving vehicle four times a day. This method, however, is not ideal as it leaves large time gaps between inspections and there are difficulties inspecting at night.

Despite the shortcomings of visual inspections, there has never been a technical alternative. The Tarsier system changes that by allowing runways to be monitored continuously day and night. Typically, two or three static radar towers are required to cover a complete runway, 24 hours a day, in almost any weather.

At the core of the Tarsier system is a new millimetre wave radar designed by QinetiQ specifically for FOD detection. Using an innovative and patented technique, it offers higher resolution, clarity, and accuracy than any other airport radar. It is capable of imaging items the size of a steel bolt at up to a kilometre away.

To allow an operator to assess the risk that an item poses, Tarsier includes a cued camera – a high magnification lens with colour and near-infra red cameras, along with a unique infra red illuminator for use in darkness. It is critical that the illuminator is safe to the naked eye, yet has the ability to ‘light up’ small objects from a distance. The novel design through which this is achieved is the subject of a current patent application.

A ‘smart’ element of the system can automatically discriminate FOD from the background, through the use of patented signal processing. The operator can then visually identify FOD and determine whether or not it presents a threat to aircraft. Tarsier is able to detect metal, plastic, glass, rubber, and organic matter to within a few metres and provide accurate GPS coordinates for quick retrieval.

QinetiQ’s Tarsier is the world’s first fully operational FOD detection system. The first system was sold to Vancouver International in 2006, and installations at Dubai, Doha, Heathrow, Providence Rhode Island, and RAF Boscombe Down have followed. The proving of Tarsier, technically and as a commercial proposition, has led aviation regulators in the US and Europe to begin planning the widespread introduction of FOD detection systems.

The safety benefits to the travelling public that Tarsier brings are clear: constant inspection of the runway, rather than inspecting once every six hours, dramatically reduces the risk posed by FOD. In its two years in operation at Vancouver, Tarsier has found over 400 items, including several classed as ‘posing significant risk’. 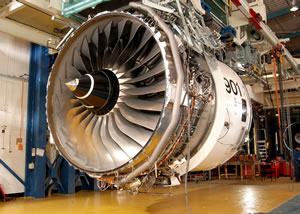 The development of the Airbus A380 ‘super-jumbo’ set a new level of required standards for aircraft engines. Rolls-Royce’s Trent 900 was chosen to be the launch engine for the A380 due to its exceptional fuel economy, low noise, and advanced monitoring and maintenance systems. Since entering service on the Airbus A380, the high-technology Trent 900 has been demonstrating significant environmental and operational benefits.

Having achieved the honour of being the launch engine on this flagship programme, environmental considerations were placed at the core of the product’s development. To meet these challenges, Rolls-Royce married the successful engineering heritage of the established Trent engine family with an extensive suite of innovative new technologies.

A focus on environmental concerns led to significant improvements in both fuel consumption and emissions. The incorporation of a contra-rotating high-pressure shaft system has significantly reduced aerodynamic losses and reduced the number of internal components. Rolls-Royce also used advanced aerodynamic techniques to define optimised 3D compressor and high-pressure turbine aerofoils.

Together with the development of a novel tiled combustor, these innovations secured the engine’s high performance while meeting all foreseen emissions regulations and competitive challenges. Through this comprehensive approach, the Trent 900 has succeeded in delivering performance improvements equivalent to reductions of $1.3 million in fuel costs and 6,150 tonnes of emitted carbon dioxide per aircraft per year.

This spirit of innovation has also extended into the operational arena. The engine is equipped with a health monitoring system that enables remote analysis of engine performance.

This allows early identification of potential issues and the preparation of maintenance activity even before the aircraft lands. Uniquely, the Trent 900 engine was designed to be transported whole in a Boeing 747 freighter aircraft, enabling operators to rapidly deploy engines to support their operational needs.

The Trent 900 continues to be the engine of choice for the A380, with 58% market share, over 400 engine orders and selection by 10 of the 13 operators who have placed orders for A380 aircraft.

The Trent 900 entered service with the A380 launch customer, Singapore Airlines, in October 2007. Since then, the engine has accumulated over 120,000 hours of operation with Singapore Airlines and, more recently, Qantas. Entry into service has been exceptional with operational statistics leading the launch airline to comment on the programme as its “smoothest ever” entry into service.