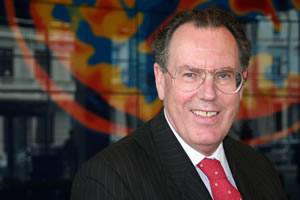 “I am not a pacifist, but working on medical technology seemed much more appealing than developing defence systems.” This is how Professor Richard Kitney’s career changed direction and took him to the interface between engineering and the life sciences. At first he concentrated on engineering for the benefit of medicine. But more recently, his focus has been on synthetic biology, a radical new merger of engineering and biology that could, he believes, do in the 21st century what synthetic chemistry did in the 19th century.

Richard Kitney’s career-defining decision came after he had studied electrical engineering at Surrey University on a scholarship from Thorn EMI, a large British company involved in consumer electronics, music, defence and retail.

When he joined the company’s research labs, Kitney worked on high-frequency electronics for radar systems. When the company added medical technology to its repertoire, he jumped at the chance to move into the area.

Kitney had always been interested in electronics and medical technology, an interest that came first from reading comics and then from watching television programmes by the likes of Heinz Wolff – sometimes credited as being the inventor of bioengineering, the subject that Kitney would later go on to help to redefine. Kitney also acquired early hands-on experience in the field when, as a 10-year-old, he made a transistor radio for his mother.

While at Thorn EMI, Kitney had kept in touch with friends at Imperial College London. When he discovered that there was “a whole floor of people there working on medical engineering,” he arranged to visit the lab. “One thing led to another,” says Kitney. The offer of a PhD place, and a CASE studentship from what is now the Engineering and Physical Sciences Research Council (EPSRC), led him to take leave of absence from Thorn.

Working on the PhD severed Kitney’s direct link with electronics. He started his research career modelling the cardiovascular and thermoregulatory system and built a computer simulation with “almost 100 differential equations”. It took five minutes of computer time on an early IBM 1800 to model a single heart beat, or “a single cardiac cycle” as he puts it. Today, Kitney muses, a laptop could probably complete the task in a millisecond.

With a PhD added to his CV, Kitney returned to Thorn EMI. When it became clear that medical technology wasn’t going to be possible with them, Kitney had to decide if he wanted to return to working on RF systems. “I don’t really think so,” he recalls thinking at the time.

A chance came up to move into academia when Kitney was invited to join the biophysics department at Chelsea College. They wanted him to teach on an MSc course on the engineering challenges facing medicine. This proved a baptism of fire. Not only did the new lecturer have to write the course, he had to teach it as an intensive evening class, with two three-hour sessions a week. “That was hard work. It was a pretty tough introduction to teaching.”

While at Thorn, Kitney had kept his research “ticking over,” as he puts it, spending a few days a week in what was then the Engineering and Medicine Laboratory at Imperial. His boss at Chelsea, Denis Rosen, expected him to do research “but he didn’t mind where we did it”. So Kitney split his time between doing research for a couple of days a week at Imperial and the rest of the time teaching at Chelsea. “In those days the universities were very much more relaxed,” he says.

In the mid 1980s, the new Head of the Electrical Engineering Department, Bruce Sayers, asked Kitney if he would run the Engineering in Medicine Laboratory (his old section) at Imperial.. The move to Imperial meant running a research section, a laboratory with a half a dozen academics, support staff and 20 or 30 PhD students. All this within five years of being hired as a lecturer.

During this time Kitney’s research reputation was growing. He had continued his work on modelling. “Because of the cardiovascular work I had done, I was presenting papers on advanced signal processing methods, mainly on analysing biological and physiological waveforms.”

Much of this is today seen as “standard stuff”. It comes in packaged software. Back then there were only one or two papers on the subject. “Nobody was doing it,” says Kitney.

One obstacle that engineering researchers face when tackling medical challenges is the language barrier. To get anywhere, says Kitney, “you have got to talk to medics in their own language”. It helped that, while working on his PhD, Kitney had taken “a good part of a physiology degree” at UCL. “It helps to know the vocabulary of physiology. I was able to talk to them in their own language. You can’t go in there and talk engineering at them.”

He recalls sitting with another colleague, Martin Rothman, a cardiologist, outside a pub not far from Imperial. Together they sketched the idea for a system on a beer mat, “literally over 15 minutes”. They then went on to develop what came to be known as an intravascular imaging system. “We produced a 70 element piezoelectric transducer on the end of a catheter, ending up with three dimensional ultrasound images of the inside of arteries.”

Kitney and Rothman formed a company, Intravascular Research Ltd, to bring the idea into medical practice. He was the company’s Technical Director from 1987 until 1994, when the business was sold. Why set up your own business? “Nobody was interested in our idea,” says Kitney. “It was all too leading edge for the big companies.”

Taking research results and creating products and services is a part of Kitney’s philosophy. “The whole point of engineering is to get something out into the market place,” he insists. This is particularly true of medical engineering. “That’s what doing medical research is about, you want to help people.”

Another commercial product came out of Kitney’s research, working on a parallel area of research with the paediatric department at St Mary’s Hospital. The medics asked for help in monitoring the physiological state of newborn babies. “We started working on methods of looking at babies at risk.”

Once again, Kitney’s group took the idea through to a finished product that went on to make money. This time commercialisation came through a licence to a company in the USA.

As a sideline from research on physiological processes, Kitney had also worked on medical information systems – keeping electronic patients records and other aspects of storing and displaying medical data. His team developed a web-based patient information system. Not for the first time, says Kitney, people thought he was mad to even suggest the idea. “I almost got laughed off the stage,” he says of a presentation he gave on the subject in 1997.

Such rejection does not bother Kitney. “I have always been arrogant enough, or pig-headed enough, to stick to my convictions.” Now, of course, web-based techniques have become standard.

In the event, this was another research venture that went commercial and became “really quite successful,” says Kitney, in the shape of Visbion, a spin out company from Imperial that he set up with Stefan Claesen, his colleague on the work and CEO of the company. Kitney is good at remembering the names of the people he has worked with over the years and effortlessly drops them into the conversation.

Kitney still chairs Visbion, which employs 30 people and virtually has a monopoly of the veterinarian market in the UK for what are known as digital image archive and communications systems. The company also sells to the private health sector in the UK and to medics abroad. The NHS is another matter and one where Kitney is less than complimentary. As he puts it, quoting yet another colleague, it is hard to sell ideas to the NHS when you don’t know where to find the front door.

It seems to be a large leap to go from imaging of physiological processes and medical records to Kitney’s current research at Imperial. As founder of a unit working on systems biology and synthetic biology, he is pioneering completely new ways of looking at engineering and the life sciences.

Asked to prove it, Kitney wrote an article for Ingenia (issue 7, February 2001) and started to make the case for his ideas, talking to anyone who would listen.

In 2003, for the 50th anniversary of the Watson and Crick paper on the double helix, Kitney gave an Academy/EPSRC lecture at the Royal College of Physicians to mark the event, titled Engineering in the post-genomic age.

“I could see that, with the initial sequencing of the human genome in 2001, the whole area of molecular biology, proteomics, genomics and so on would become extremely important in medicine.

To study those systems at that sort of level, you need systems biology.” And if engineering is to continue to contribute to medicine and biology, then it has to operate at the same level.

Kitney illustrates the point by describing how ribosomes work as a “protein factory”. These have control mechanisms, feedback, signalling. “All of the engineering techniques that you would use in physiological modelling, they are all going on there at the intracellular level.”

Two years later, The Royal Academy of Engineering and the Royal Academy of Medical Sciences worked together on a joint inquiry into systems biology. The resulting report, which was co-chaired by Kitney, was launched in February 2007 and persuaded some Research Councils to invest in the subject.

Kitney now spends much of his time communicating his enthusiasm for synthetic biology to the wider research community, most recently with a major report from the Academy Synthetic Biology: scope, applications and implications, published in May 2009.

“Synthetic biology has all the potential to produce a new major industrial revolution,” says Kitney. “We can say that because there are very close parallels between synthetic biology in this century and synthetic chemistry in the 19th century.”

Imperial College is already on the case, with the EPSRC-funded UK Centre for Synthetic Biology – of which he is co-Director (along with his colleague Paul Freemont, who is a biologist). Naturally enough, given his background, Kitney wants the centre to go beyond research and help shepherd results out into the world, which is why the centre’s official title is the Centre for Synthetic Biology and Innovation. It also has a role in addressing social and ethical issues, which explains why the London School of Economics is a partner with Imperial in the new research centre.

As yet, the new subject has only a few results to show for itself. Kitney and Freemont have come up with a detector for urinary tract infections and are working on another for MRSA. His group is also researching “biologically based logic gates,” work that could lead to biological counters that count cell division, for example, which might have applications in cancer research – as well as other forms of advanced biosensors. Elsewhere, researchers are developing new ways to make drugs and more advanced biofuels.

Maybe one day synthetic biology will also do something about another of Kitney’s interests: French food and wine. Coming up with a way to engineer fine burgundy really would be a very long way from working on defence systems.

Michael Kenward has been a freelance writer since 1990 and is a member of the Ingenia Editorial board. He is Editor-at-Large of Science|Business.