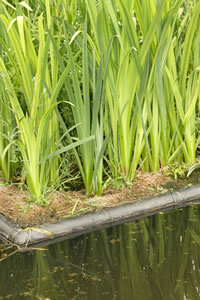 The search for green, low-energy technologies to treat effluents have brought a revival in the use of engineered reed bed systems to treat effluents. Professor Joe Biddlestone and David Cooper have been heavily involved in the promotion and installation of constructed wetlands in the UK. Here they write about this natural method of disposal and treatment of dirty water.

The use of wetlands to treat effluent is not a new idea. The Chinese and Egyptians used natural wetlands to clean up liquid effluent thousands of years ago. Constructing wetlands however is relatively new with Australia creating the first recorded construction at the beginning of the last century. Research in the USA into the field did not begin until the 1970s and the UK has only been using reed beds since 1986. Now, however, it is recognised that constructed wetlands are both an economic and a natural method of treating liquid effluent.

Today, more than 1,500 constructed wetland treatment systems operate in the UK. Put simply, the engineered reed bed is an artificially created wetland that contains specially selected species of reeds, or sometimes rushes, planted in gravel or soil. This set up provides a home for huge colonies of microorganisms that break down any organic pollutants from an inflow of dirty water, leaving the outflow cleaner.

These engineered systems are designed to optimise the actions of the natural purification process and can treat many wastewaters from domestic sewage and grey water to industrial effluents and road run-off. Reed beds are typically built at or below ground level, only occasionally above ground, and usually filled with soil or gravel.

Aquatic or marsh plants (emergent macrophytes) are then planted in this medium with the Common Reed, Phragmites australis, being the most widely utilised, although alternatives such as the Great Reedmace, Typha latifolia, are also used.

The type of vegetation is key to such systems. Indeed, studies indicate that microbial populations within gravels containing Phragmites and Typha are far greater than those existing in gravel alone.

So why can these microorganisms – mainly bacteria – commune so successfully in reed beds? The answer lies largely in the root systems of the aquatic plants. These root systems consist of rhizomes, which contain thick hollow air passages from which finer roots hang down. The rhizomes grow horizontally and vertically, helping to keep pathways open for the passage of water through the reed bed.

The plants absorb a small amount of oxygen from the air and release it through their roots. Oxygen is transmitted to the root zone, also known as the rhizosphere, through the leaves and stems of the plants, and is then exuded from the finer roots. This process helps the rhizosphere initiate and support large populations of aerobic microorganisms, which thrive in oxygen-rich environments. Meanwhile, populations of anaerobic microorganisms congregate away from the root zones, as they do not rely on oxygen for growth.

Such a set up means that, as wastewater passes through the rhizosphere, it encounters alternate aerobic and anaerobic microbial populations. These convert carbonaceous, and to a lesser extent nitrogenous and phosphatic contaminants, into less polluting materials.

While the natural activity of plants and microorganisms is crucial in wastewater treatment, engineering knowledge is essential to ensure a fully functioning reed bed is properly built and continues to operate effectively during its lifetime. Initial considerations include preparing the excavation and then sealing it to prevent leakages. Getting the right bed geometry is also critical to achieving the required hydraulic flows when using matrix materials with different hydraulic conductivities.

The effluent level and flow rate through the bed also need to be carefully controlled to ensure that the wastewater receives the necessary treatment. A sufficient level of ‘liquid hold-up’ or retention is critical to the effectiveness of a system.

Several types of reed bed exist, categorised according to hydraulic flow, such as horizontal flow, vertical flow, surface flow, and hybrid beds. Horizontal flow beds are the most common type in the UK and are used for a range of wastewater treatments.

Typical examples include tertiary wastewater treatment – removing effluents from upstream treatment processes – as well as the secondary treatment of stronger polluting liquids such as industrial or septic tank effluents. These systems are also used to treat grey water from washbasins, showers and baths, and storm waters.

A typical horizontal flow bed consists of a soil or gravel matrix in which the reeds are planted. UK systems use predominantly gravel media. The wastewater is fed onto the inlet end of the bed, flows through this matrix and emerges at the exit end of the bed. The matrix is kept flooded with the water surface less than 5 cm below the surface of the gravel media.

One recent example is a reed bed in Berkhamsted, Hertfordshire (see over page), owned by UK water company, Thames Water. Commissioned in 2008 and designed for ARM Reed Beds by one of the authors, the sub-surface horizontal flow reed bed is used for the tertiary treatment of sewage, specifically for foam and ammonia removal.

If one wants to deal with stronger effluents and have less space, then vertical flow reed beds can be a better option. These systems are more complex to build than horizontal versions and the sizing of the bed area is crucial to provide treatment to specific standards.

A vertical flow system is typically 1 m deep and contains a range of matrix materials which are graded according to size. Large stones lie at the bottom of the bed, topped with smaller stones, typically 30 mm to 60 mm in diameter. Coarse gravel lies on top of this, with 6 mm pea gravel above this layer and sharp sand lying on the surface. The wastewater is distributed across the surface and flows down vertically through the layers of sand, gravel and stone. As with horizontal beds, the network of rhizomes maintain hydraulic conductivity as well as supporting populations of aerobic bacteria.

In such a set-up, the bed is intermittently dosed with wastewater which allows time for the effluent to percolate through the matrix. As the effluent drains out, air is drawn from the atmosphere into the bed, enhancing oxygen transfer through the system. Perforated pipes, set within the layers, allow further air ingress.

The system was designed with a gravel matrix, planted with Phragmites australis. The bed area is relatively small, measuring 210 m2 and the average flow to the bed is 0.6 m3/hr.

Today, reed beds are seen as a sustainable way to treat sewage. The majority of the operating reed beds found in the UK are usually horizontal flow beds for the tertiary treatment of sewage at small works; however, vertical flow beds are becoming more widely used.

Now, as the industry’s understanding of design principles increases, more and more interesting treatment systems are emerging all the time.

For example, sludge-drying reed beds, a modified version of the vertical bed and widely used in Denmark, are now being built in the UK. With this design, the sludge is distributed over the surface of the bed and the solids become trapped and gradually biodegrade. Meanwhile, any liquid percolates down through the bed, receiving a treatment before being returned to the bed’s inlet.

Another design, the floating reed bed, has been researched in Belgium. This consists of a buoyant, tubular framework inside which a coir mattress is fixed and across which the reeds are planted. The resulting raft literally floats on the water. This design is ideal for aerating ponds or lagoons and removing algal blooms. In fact, the beds can also be designed to encourage or dissuade nesting birds while additional wetland plants can be added to the reeds to promote insect diversity.

TICKING ALL THE BOXES

Reed beds treat effluent effectively, have a broad application range, and have low or no energy requirement: as long as gravity is on your side, no power is required. They have low maintenance costs, create wildlife habitats, offer sustainability, and are very robust.

As the designs of reed bed develop and become increasingly sophisticated, more and different wastewaters are able to be treated. These include run-off from roads, airports, and vehicle-servicing areas as well as leachate from landfill sites and metal-contaminated effluents from operating and derelict mines.

Over the past 30 years in Europe, these constructed wetland systems have been successfully harnessed to treat sewage and many other pollutants in wastewaters. Without a doubt, even greater potential remains for the engineered reed beds of the future.

David Cooper is Managing Director of ARM Ltd (ARM Reed Beds) and Secretary of the Constructed Wetland Association. David Cooper is a chartered engineer and chartered environmentalist. He has been at the forefront of wetland technology in the UK for more than 20 years. He has helped develop the product and the market and has designed more than 350 wastewater treatment systems incorporating reed beds.

The authors would like to thank Dr Rebecca Pool for her help with this article.

The winner and three finalists of the 2009 MacRobert Award, presented at this year’s Academy Awards Dinner.